When the team from EAP660 submitted their hard drive containing all their digitised material, it seemed a very intriguing project, but as I could not read Urdu I wanted to learn a little bit more. I contacted one of the co-applicants, Dr Charles Ramsey,  to ask him a few questions about the project that digitised the periodical Nur-i-Afshan.

The Nur-i-Afshan is a glimpse into the Punjab in pre-partition India.  The gazette is unique because it gives voice to the first generations of indigenous Christians in this region who wrote in Urdu.  It was a period of religious revivalism and the publication gives firsthand accounts from a constituency that is seldom heard.  This included discussion of political events, like the fall of the Ottoman caliphate and the start of World War 1; religious controversies, like debates between the Ahmadi and Christian preachers; and also the more mundane accounts of the rice harvest and administrative postings. 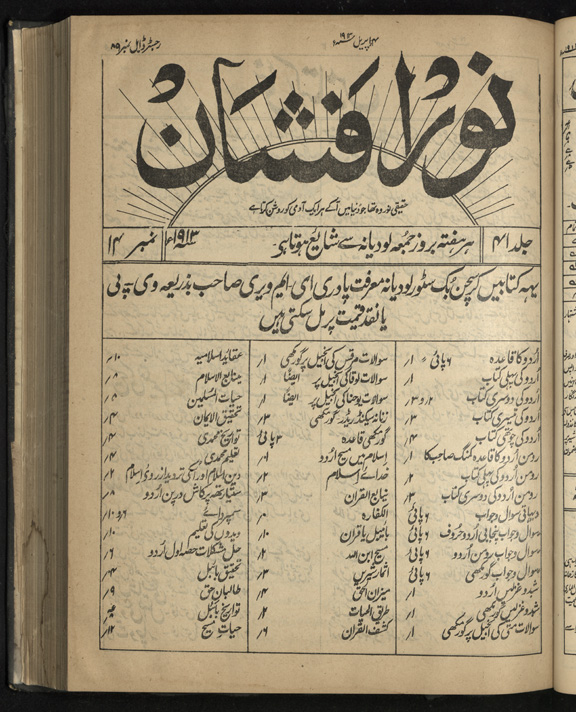 Approximately eight people worked on the project.  Each of the three co-applicants assumed responsibility for a particular area. Mrs Bushra Jaswal, Head of Libraries at Forman, arranged each piece of the technology which was no small task.  The digitisation room was built from the ground up.  She also trained and oversaw Mr Sohail and Mr Mirza.  Dr Yaqoob Bangash administered the grant.  He was assisted by Abraham, a former student who is preparing for graduate study, and they combed the archive for data to enhance his current monograph on the history of Christianity in Pakistan.  I, assisted by Mahmood Basharat and student interns Shuham Charles and Chand Prince, worked to identify and codify the key terms that would facilitate future research. I was particularly attracted by the collection of devotional poetry reprinted in the editions composed by authors from various faith traditions. 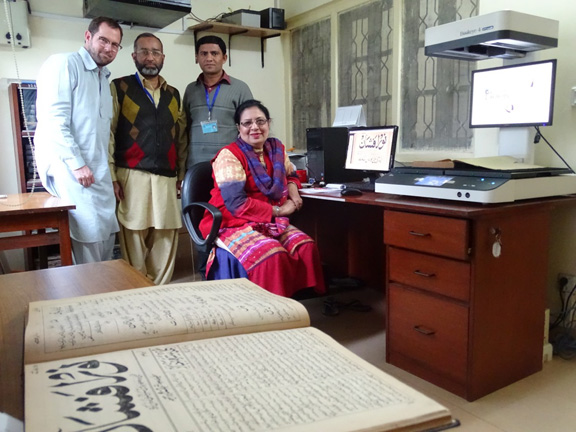 There were many, and it is difficult to chose.  If I had to chose one it was the discovery--together as a diverse and polychromatic team--of the voices from this period.  The attitudes, the depth of understanding, and the quality of interaction across religious boundaries during this time were more dynamic than what we expected.  We were often surprised, even enchanted, by the words and expressions used to convey and describe their present reality.

Keeping the schedule was the greatest challenge.  We had to import the equipment and set up the digitisation laboratory.  That was very demanding, and it got us off to a late start.

Oh absolutely.  It should be noted that as we located articles we began disseminating these to pertinent scholars.  The materials have already been included in Birmingham and Oxford theses, as well as in local research projects.  I was taken by an extended series concerning the Sermon on the Mount.  This is virgin territory for indigenous theology, and I was personally edified.

Yes, absolutely.  We have automatically transitioned to scanning Folio, which is is the College's literary journal.  We are also in discussion with the Punjab archives about digitising Paisa Akhbar.  This was a leading Urdu language newspaper in Lahore and it is now endangered, in the truest sense of the word.  We hope to secure the permissions and complete a proposal by September or October.  Perhaps this can lead to the scanning of some of the other priceless 16th and 17th century texts also housed there.

Everyone at EAP would like to wish the team at the Ewing Memorial Library, Forman Christian College the very best for their next digitisation project.

Posted by Endangered Archives at 12:15 PM