Safeguarding poetry by Usman dan Fodio and his contemporaries

To celebrate West Africa: Word, Symbol, Song, the current exhibition that is on at the British Library, we are excited to have guest posts by some of the grant-holders that have carried out EAP projects in the region and we look forward to posting them in the next few months. Our first contributor is Dr Anneke Breedveld who talks about her project to digitise important Fulfulde ajami manuscripts from Nigeria, one of the poems from this project appears in the exhibition.

In 1997 Abubakar Bashir, the custodian of some 700 handwritten poems composed more than 200 years ago by the famous Nigerian Muslim leader Usman dan Fodio and his contemporaries, crossed almost 900 kilometers of rough terrain from Yola in Nigeria to Nkambe in Cameroon, to track down a linguist who could help him document his important inheritance. Covered in dust and bruised from being bounced about for four days in public transport, he arrived in Nkambe where he found me. Somehow he knew that I had written my PhD thesis on Fulfulde, the language in which the poems were composed and thought that I was the expert he was looking for. I couldn’t agree less, but Bashir insisted on showing me copies of some of the poems he had brought with him and explained to me their provenance, their contemporary use and historical importance. The significant involvement of women instantly caught my attention.

Bashir had inherited the poems from his mother and they were passed down to her by generations of men and women, all the way back to the 1790s when Usman dan Fodio and fellow jihadists, including his daughter Nana Usmanu, found the time to sit down and write beautiful poetry in their mother tongue, Fulfulde. These poems are a living history, as they are still recited by men and women alike at festive occasions such as Mawlid, the celebration of the birth of the prophet Mohammed. The original poems are written in Arabic script and some are in a very bad condition due to centuries of folding and unfolding. Bashir looked for advice and help to safeguard these texts for the future by transcribing, translating and archiving them properly. He returned home with a list of questions we thought should be answered in order to understand the poems. 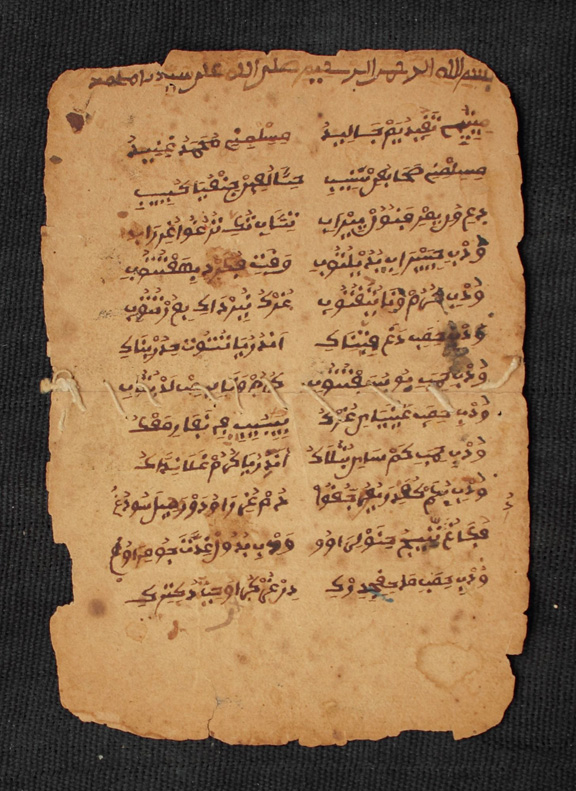 EAP387/1/3/10 First page of the poem  entitled "Yimre yeyraa'be" by Moodibbo Raaji , a friend (and later also critic) of Usman dan Fodio. It shows a page skilfully sown together, showing the care and respect that owners had for the texts.

Years later in 2009, Bashir invited me to London. Apparently I was not the only authority he had turned to for help and he had managed to get sponsoring from the Emir of Sokoto to fund my costs, including a laptop and a mobile phone so that we could stay in touch. Bashir had managed to produce transliterations into roman script of all the Fulfulde poems in his possession, which made it so much easier for me to understand (or at least to read) them. Like his mother, he would also recite the poems at special occasions and we made some recordings of the poems. And since in Fulfulde “to recite poetry” is synonymous with “to sing”, these are impressive recordings. London was also the place where the seed was planted for EAP387, a major project for digital preservation of the 1500 pages of Fulfulde poetry. In 2011 I went to Nigeria to digitise the documents at the University of Mubi. 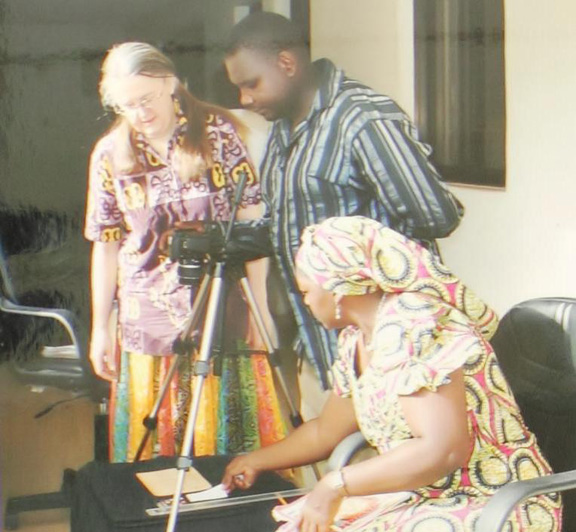 The documents of EAP387 are now accessible for people to study. The translation of the texts is an ongoing process, as the documents show that Fulfulde has changed considerably over 200 years. My knowledge of different dialects and morphology helps to put forward possible translations to the native speakers without whom translation would not be possible.

Safeguarding the digital records in EAP387 is only the beginning of transferring the knowledge contained in it to future generations. Wouldn’t it be great if the recordings of the recitals of the poems, Latin transcriptions of Fulfulde and translations into Hausa and English would be added to the digital records of EAP387 in a multi-modal document? Thus the poems would truly become a rich source for the study of West African history.

Posted by Endangered Archives at 11:59 PM