Our final blog to coincide with the British Library's exhibition on West Africa is by Dr Fallou Ngom, grant holder for EAP334, a project that digitised Wolof Ajami manuscripts from Senegal. Dr Ngom gives a fascinating and detailed explanation on how the Arabic script was modified for the Wolof language.

It has been noted that some of the oldest African Ajami texts kept in some European libraries are mislabeled as arabe indéchiffrable (“undecipherable Arabic”).[i] Though Ajami has a long tradition in Africa, stretching from Senegambia to the Horn of Africa, it has been largely overlooked in teaching and research about the region, partly because Ajami texts are difficult to decipher by outsiders. Like other Ajami users around the world, Wolof Ajami writers enriched the 28 Arabic letters with diacritical dots (Wolof: tomb). These diacritical dots can be placed below or above Arabic letters or below or above Arabic vowel diacritics, as reflected in the excerpt below.[ii]

In the Name of God, The Merciful, The Beneficent.

May blessing and Peace be upon our Master Muḥammad

about Shaykh Anta. Do not sleep

No matter how asleep I am, I will wake you up

No matter how confused I am, I will call upon you

Perhaps, some pretend to be asleep because they are confused

But when awakened, they will snore no more.

The Wolof language has 43 consonants (including geminates). The following eleven consonants do not exist in Arabic: p, mp, mb, c, ñ, nc, nj, and ŋ, g, ng, and nd. Thus, to render them in writing, Ajami users had to modify Arabic letters that represents Arabic sounds closer to them with diacritical dots. An orthographic rule is applied to the following natural classes: bilabial, palatal, velar, and prenasal-alveolar consonants. The bilabial consonants (p and the prenasal mp, and mb) are written with the Arabic bā (ب, b) with three dots placed above or below. Verse 1 and 2 show examples of mb written with the dots above and below the bā. Similarly, the palatal consonants (c, ñ, nc, and nj) are rendered with a jīm (ج, j) with three dots above or below. An example of c (in ci, the proposition at, in, on) written with a jīm with three dots below is shown at the beginning of verse 2. On occasions, the dots are omitted inadvertently.

The velar consonants ŋ, g, and ng are generally written with the Arabic kāf (ک, k) with three dots above or below. An example of g is in verses 1 and 4. The prenasal-alveolar nd forms its own class and is commonly written with the dāl (د, d) with three dots above or below. Verse 6 contains an example of nd written with dāl with the three dots above. While in Romanized texts, the vowel diacritic that typically follows geminates and prenasals in Ajami texts is not represented, in Ajami texts it reflects an articulatory phonetic feature. It refers to the consonantal release at the end of words with geminates or prenasals. Finally, the sukūn (o placed above a consonant) functions in Ajami texts as it does in Arabic materials. It is used to indicate absence of vowel after a consonant.

The front vowels i, e, and é are typically written with kasra, imāla (a dot below the letter) or their combination, as illustrated in verses 1, 2, 3, 4, and 5. The back vowels o, ó, and u are written with ḍamma as seen in verses of the excerpt. In some Wolof Ajami texts, o and ó are further differentiated from u and are written with a ḍamma with a small dot inside.  With respect to the class of central vowels which includes ë and a, both vowels are generally written with the fatḥa, as shown throughout the excerpt.

Additionally, when a word begins with a vowel, there are several possibilities to write the vowel. Because the fatḥa, kasra, and ḍamma diacritics used to write respectively the vowels a, i, and u in Arabic cannot stand alone, the alif (ا) is commonly used as a supporting letter in Wolof Ajami materials. The consonants ḥā (ح, ḥ), hā (ه, h), and cayn (ع, c) can also serve as supporting letters at word-initial position in Wolof Ajami writing. The vowel a in the word amaana (perhaps), the first word of verse 5, is written with a fatḥa placed on a supporting ḥā.

Additionally, the ḥā (ح, ḥ) and hā (ه, h) have other orthographic functions in Wolof Ajami writing. They can both occur at the end of words. When these two letters (ح and ه) are used at word-final positions in Wolof Ajami texts, they reflect an articulatory phonetic feature: the uninterrupted airflow of final vowels. The hā (ه) can also indicate a dialectal trait in Wolof Ajami. In such cases, hā (ه) indicates a dialectal feature of the rural Bawol-Bawol Wolof variety spoken in the heartland of the Murid areas where h is pronounced before nouns beginning with a vowel, in contrast to urban varieties where it is dropped.

The segmentation system that Wolof Ajami practitioners utilize to break their words and phrases also differs in some respect from the one commonly used in the standard Latin script texts. The phrases with multiple elements in the Romanized excerpt form single units in the Ajami excerpt. The first phrase in the box in verse 1, ma yee leen (I wake you up), consists of the subject pronoun ma (I), the verb yee (to wake up), and the object pronoun leen (them). The second phrase in the box in verse 2, ci mbiri (about/concerning the business of), consists of the preposition ci (at, in, on), mbir (business/affair), and the plural genitive morpheme –i. The two phrases in the boxes in verses 3 and 4, ma yeete (I wake up people) and ma woote (I call upon people), consists of the subject pronoun ma (I) and the verbs yeete (to wake up people) and woote (to call upon people). While the elements of the structures are isolated in the standard Roman transcription, they are agglutinated in the Ajami excerpt.

Though deciphering Ajami texts is clearly not easy, the benefits are immense. Deciphering such Ajami texts opens up new doors into important written sources of African knowledge that have hitherto eluded most Arabophone and Europhone scholars. Ajami sources are old and extensive and they complement the (1) Arabic, (2) Europhone, (3) indigenous written, and (4) oral traditions of Africa that constitute the “African Library.” Ajami sources equally deal with both religious and secular matters, including arts.[iii] 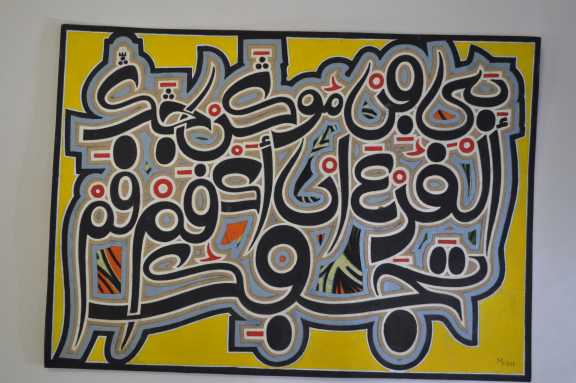 Bàyyi fen moo gën jàng al-Quraan ak xam-xam te jëfe ko [to stop lying is better than studying the Qurʾān and knowledge [of Islamic sciences] and living by it], a maxim in Ajami calligraphy emphasizing the primacy of ethical excellence over ritual practice in the Muridiyya Sufi order of Senegal. Courtesy of Yelimane Fall, Murid calligrapher.

[iii] For more on the information in Ajami materials in general and the Wolof tradition in particular, see: Murid Ajami sources of knowledge: the myth and the reality ; and EAP334.

Posted by Endangered Archives at 10:11 AM