Over the past few months we have been working to make publicly available some of the sound collections that the Endangered Archives Programme has funded. Two of the first collections we worked on were EAP088: The Golha radio programmes (Flowers of Persian Song and Poetry), and the three projects that make up the Syliphone record label collection from Guinea (EAP187, EAP327 and EAP608). It is with great pleasure that we can announce that these two collections are now available on BL Sounds for anyone to listen to worldwide.

The Golha radio programmes were broadcast on Iranian National Radio between 1956 and 1979 and consist of a mixture of musical pieces, poetry and literary commentary. These programmes can be listened to here. You can read more about this project in a previous guest blog by Jane Lewisohn.

To celebrate these collections now being made available we have a guest blog entry from Dr Graeme Counsel whose hard work has enabled these fantastic Syliphone recordings to be shared with a wider audience. The recordings are available here to listen to. There are 7780 tracks in total for you to enjoy! The end of colonial rule in Africa commenced with Ghana’s declaration of independence from Great Britain in 1956. Faced with a growing independence movement, to gain the ascendancy France presented its colonies with an ultimatum: the choice of autonomy in a confederation of states under French rule or total independence. Guineans were the first to vote on this offer via a national referendum, and in September 1958 the mayor of Conakry, Sékou Touré, addressed a large crowd who had gathered on the eve of the poll. With President Charles de Gaulle standing by his side, Touré implored Guineans to vote no to the offer of autonomy, declaring that “Guineans prefer freedom in poverty to riches in chains”. A few days later Guineans stunned France by voting for independence, and under the Presidency of a young and charismatic Sékou Touré the nation would become one of the major proponents of pan-Africanism and an architect in the formation of the Organisation of African Unity (now the African Union).

President Touré saw the development of national identity as key to the progress of his nation. The development of culture was thus a central policy platform, with the arts sector, for example, largely under government direction. This was not unusual in Guinea, for in the course of his presidency (1958-1984) Touré oversaw the government’s reach extend into virtually all facets of daily life, supported by over 26,000 party cells. To develop culture, Touré’s government launched an official cultural policy called authenticité, whereby artists were encouraged to seek inspiration from the values inherent in traditional African culture as a means of edifying contemporary society. Traditional folklore, for example, would be “revalorised”, with Guinean heroes “re-awakened” through imagery, songs and text in order to serve the needs of a post-colonial Guinean society. The process was most concisely illustrated in a catchphrase of the time – “regard sur le passé”, or “look at the past”. Of the arts, music was the principal focus of the authenticité policy, and one of the first acts by the government was to disband all private orchestras in Guinea as they were deemed to be too European in their musical style. To replace them, new state-sponsored orchestras were created in each of the nation’s 35 prefectures. The government supplied all of the groups with musical instruments, which, in the vein of the Cuban/Jazz style popular at the time, included electric guitars, saxophones and trumpets. The government hand-picked musicians who formed core “national” orchestras, and they were tasked with training the young musicians of the 35 “regional” groups. Through authenticité a new form of African music was being created, one which presented traditional Guinean music in a modern style. All of the orchestras’ musicians were paid a regular wage and all had opportunities to perform at government-sponsored national arts festivals.

In addition to a network of orchestras, the authenticité policy also created theatrical troupes, traditional music ensembles and dance groups in all of Guinea’s prefectures. Together, they formed artistic companies who represented their region in arts festivals. To further embed the authenticité policy all Western music was banned from Guinea’s radio network, and to fill the gap the government broadcast its own recordings. Since at least 1960 the Guinean government had been recording musicians, initially on Nagra III’s in makeshift studios. By the mid-1960s, however, the West German-funded Voix de la Révolution studios had been created in the Radio Télévision Guinée (RTG) offices, and these state of the art facilities would soon be augmented by a government-owned recording label, Syliphone. Originally recorded on ¼” magnetic tape, Syliphone recordings were released both locally and internationally via eighty-three 33.3 rpm and seventy-seven 45rpm vinyl discs. Broadcast by the RTG through one of the largest radio transmitters in West Africa, Syliphone recordings were a sensation, and Sékou Touré sent his orchestras and musicians on tours throughout the region and continent. It was a remarkable period of creativity which saw Guinean musicians as pioneers in the creation of African popular music styles and as the voice of a new Africa. The British Library’s Endangered Archives Programme (EAP) funded three projects to archive the collection of music contained in the sound archives of the RTG. The Syliphone archive, as it has been named, is now available through the British Library Sounds website.

The first EAP project was to reconstruct the entire Syliphone catalogue of 750 songs released on 160 vinyl discs. The government’s own archive of this collection had been destroyed in the counter-coup of 1985, when artillery bombed the national broadcaster and home of the offices of the RTG. I commenced the project in 2008 and completed it in time for Guinea’s 50th anniversary of independence celebrations. These recordings commence with the reference number “Syliphone1”. The success of the project enabled access to the RTG sound archive, a place I had visited some years earlier. Then I had been shown a hand-written catalogue of perhaps fifty audio reels of recordings. In 2008 I was ushered into a room which contained walls of reels, two or three deep. In the few weeks that remained of my project I digitised and preserved as many reels as possible, and these recordings commence with the reference number “Syliphone2”. 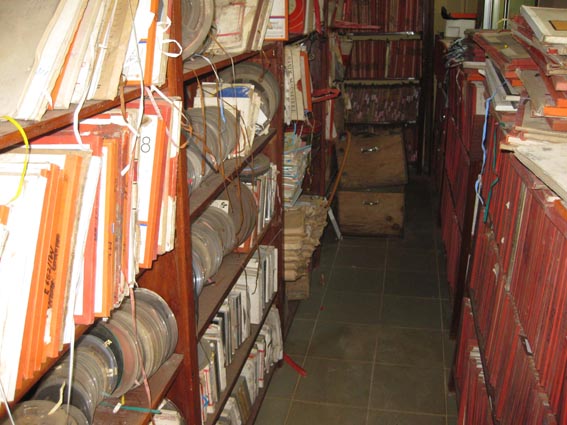 Many of the reels had been poorly stored. Some were completely void of identifying information

I returned the following year to complete the archival project. In the interim, Guinea’s long serving President Lansana Conté had died. This heralded a coup, and when I arrived in August 2009 a new military regime was in power. On September 28 an opposition rally was attacked by the Guinean army in an infamous event known as the “stadium massacre”. 187 civilians lost their lives and 2,000 were injured. In the aftermath that followed, with risks of reprisals and civil war, it was clear that working at the centre of the government broadcaster was too dangerous. The project was abandoned, just a few weeks before the government fell. The recordings from this project commence with the reference number “Syliphone3”.

In 2010 Guinea’s first democratically elected government was in office, and I returned to Conakry in 2012 to launch the third EAP project to archive the RTG’s audio recordings. In 2008 I had archived just 69 audio reels of music. In 2009 I archived 229 reels. From September 2012 to January 2013 the remaining 827 reels were archived, and these recordings commence with the reference number “Syliphone4”. The completion of the project drew much media attention in Guinea and had resulted in the preservation and digitisation of a total of 9,410 songs, or more than 50,000 minutes of music. The bulk of the material was recorded during the era of President Sékou Touré, and the archive is thus a testament to his government and to the policy of authenticité. The Syliphone archive captures an important era of African history, that of the independence period, when governments and artists alike looked to Africa’s history and culture for inspiration. 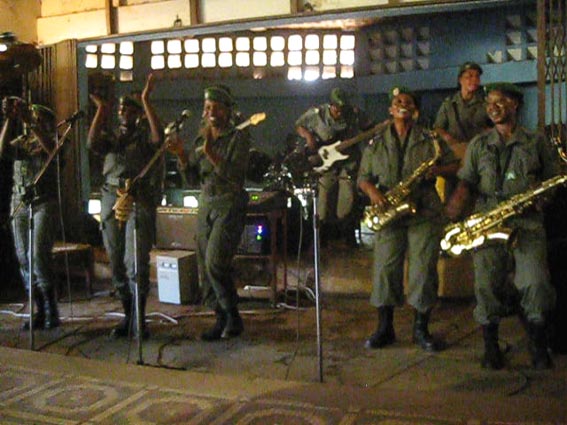 The Ministry of Culture organised a ceremony to celebrate the end of the project. The Minister of Culture & Dr Counsel both made speeches, and the all-female orchestra 'Les Amazones de Guinée' performed, as did 'Keletigui et ses Tambourinis'. The event was broadcast live

The Syliphone archive contains many unique and important recordings which document Guinea’s 1st Republic. It covers the early years (1960-1965), when Cuban music was a strong influence on the new and exuberant modern styles. The years following the Cultural Revolution of 1968 are extensively covered, and here new experimental styles are in evidence as music was being directly channelled by revolutionary policy. The early 1970s, when Guinean music was arguably at its creative zenith, is also comprehensively covered, and there are also numerous recordings from the post-Touré years, too, which permit a comparison.

Authenticité was abandoned in 1984, following the death of Sékou Touré, and the RTG’s sound archive was subject to years of censorship and neglect. Most of its recordings were never broadcast again, which resulted in a generation of Guineans having little exposure to the music of their mothers and fathers. The archive’s emergence is thus emblematic of the new era of Guinean democracy and of the gradual rehabilitation of Sékou Touré into mainstream Guinean politics. It is also a wonderful collection of music which permits us to “regard sur le passé”.

The list of artists and musicians represented in the archive is a who’s who of Guinean musicians. In addition to the complete catalogue of Syliphone vinyl discs, there are numerous examples of unreleased studio recordings by major artists such as Kandia Sory Kouyaté, Bembeya Jazz National, Fodé Conté and Kadé Diawara, in addition to hundreds of unreleased recordings by Guinea’s National and Regional orchestras, troupes and ensembles. There are dozens of concert recordings, too, and a wealth of material by famous Guinean artists who, as they were never commercially recorded, are unheralded outside of the region. Some of these include Farba Tela, Mama Kanté, Binta Laaly Sow, Koubia Jazz and Jeanne Macauley. The archive collection also features thousands of traditional songs from Guinea’s regions and ethnic groups, including recordings in the following languages: Baga, Bassari, Baoulé, Djakanké, Djallonké, Fulfuldé, Guerzé, Jahanka, Kissi, Konianka, Kônô, Kpèlè, Landouma, Lélé, Lokko, Maninkakan, Manon, Onëyan, Sankaran, Susu, Toma, Toma-Manian and Wamey.

Further information on the archival project can be found in the chapter “Music for a revolution: The sound archives of Radio Télévision Guinée", in From dust to digital: Ten years of the Endangered Archives Programme (Maja Kominko ed., Cambridge: Open Book Publishers, 2015) and also at the author’s website – www.radioafrica.com.au.

Posted by Endangered Archives at 1:17 PM