Freetown and the transatlantic slave trade

EAP has funded three projects at the Sierra Leone Public Archives (EAP284, EAP443, EAP782) and we are lucky to have a joint blog post written by the grant holders of these projects; Professor Paul Lovejoy (York University) and Professor Suzanne Schwarz (University of Worcester).

Over the past five years, several British Library Endangered Archives projects have focused on preserving documents in the Sierra Leone Public Archives at Freetown which are of enormous importance for an understanding of the transatlantic slave trade and the African diaspora. A long-running programme of digitisation has contributed to the preservation of rare and invaluable sources which are perishing in woefully deficient storage conditions characterised by extremely high humidity. The oldest document held in Freetown is a treaty dated 1788, in which British officials claimed that the land on which the original settlement was built had been granted to ‘the said ffree community to be theirs, their Heirs and successors for ever...’. The treaty, now encased in Perspex, recorded how the land had been secured for a bundle of goods including a ‘Crimson Sattin Embroidered waistcoat, a Lead Coloured Sattin Coat, a Waistcoat and Breeches, a mock Diamond Ring, two pair of Pistols, one Tellascope, Two pair of Gold Ear Rings with Necklasses...’. 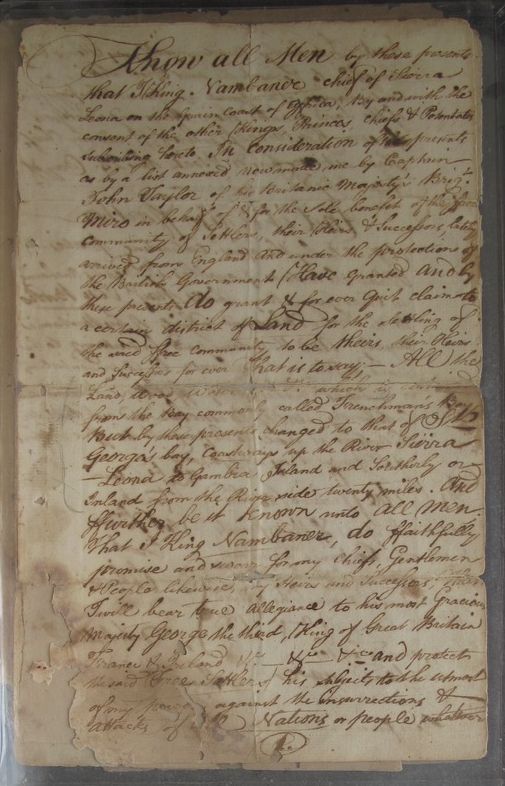 Among the most important sources held in the Public Archives is a long series of Registers of Liberated Africans (c. 1808-1848), which document the African names and physical characteristics of tens of thousands of Africans, labelled 'recaptives,' released at Freetown from illegal slave-ships by Royal Navy patrols in the aftermath of British abolition of the slave trade. These registers include rare biographical information on the African names and physical appearance of individuals released from slaving voyages originating from all the main provenance zones of the Atlantic slave trade from Senegambia to West-Central Africa. 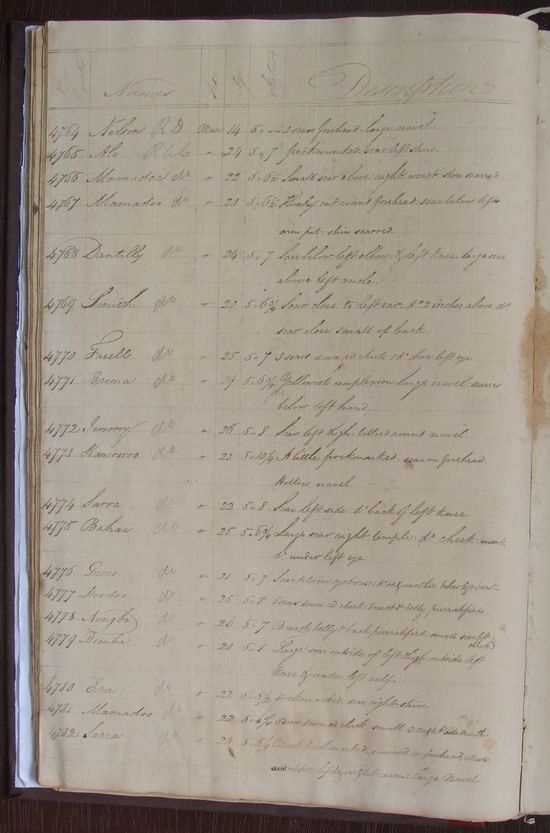 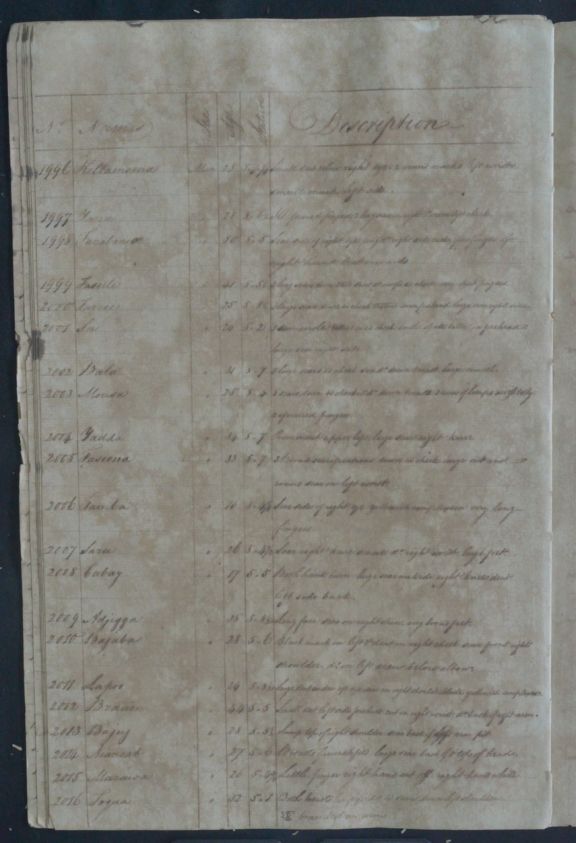 As such, the evidence documents the characteristics of Africans who were part of the forced intercontinental migration by sea in the first half of the nineteenth century. Importantly, a number of the registers and letter books from the Liberated African Department include information which makes it possible to reconstruct the subsequent life histories of individuals following their disembarkation at Freetown. This includes details of the enlistment of men and boys in the Royal Navy and Royal African Corps, as well as the ‘disposal’ of men, women and children as apprentices in the colony for periods of up to fourteen years. The role of colonial officials in the dispersion of recaptive children to settlers was modelled to some extent on the example of parish officials in distributing pauper and orphan children in England to reduce the immediate and long-term burden on the rates during the eighteenth and early nineteenth centuries. As such, the ‘disposal’ of Liberated Africans in Sierra Leone emerged as an important test case in the development of prototype systems of apprenticeship for the management of peoples uprooted and displaced by the transatlantic slave trade. This test case had wider ramifications, as principles and systems developed in Freetown were subsequently applied to other national jurisdictions for recaptive Africans in South Africa, Cuba and Brazil as well as in the British colonies of the West Indies and elsewhere following the emancipation of the enslaved population after 1834. 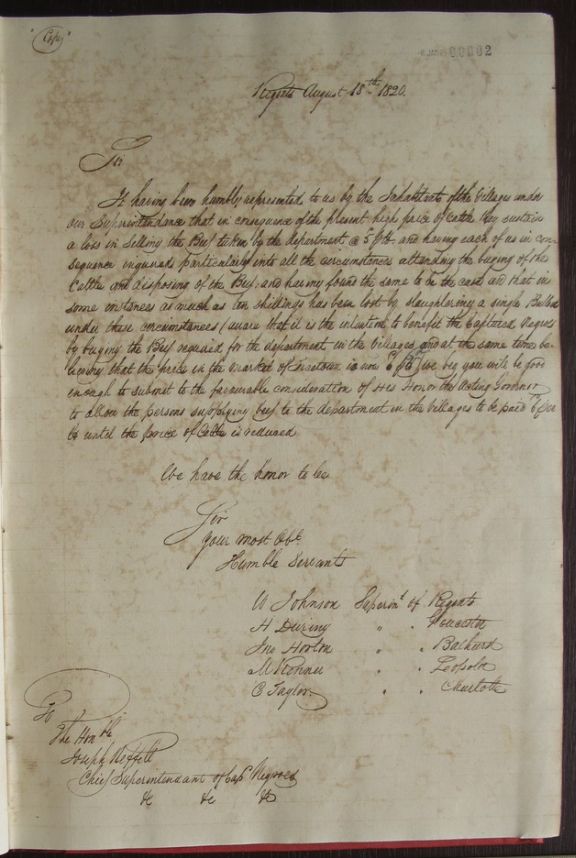 Letter books in the Liberated African series also record the distribution of 'recaptives' to colony villages, including the settlement of Wilberforce outside Freetown, and their patterns of employment, education and accommodation. The correspondence of colonial governors and letter books that record exchanges with local citizens, missionaries, and merchants have also been digitised. 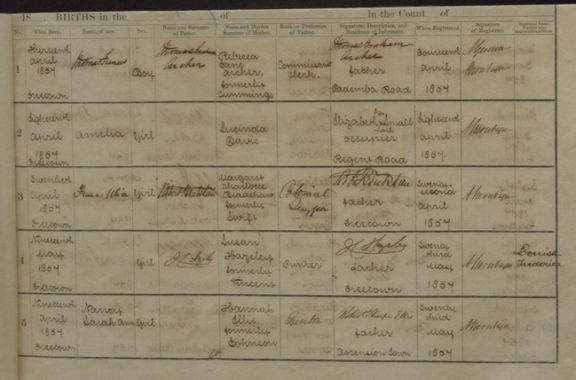 Series of birth and death registers for Freetown and outlying districts provide evidence that charts the composition of the colony’s population in the second half of the nineteenth century. Subsequent phases of digitisation in the British Library Endangered Archives Programme will include police and court records from the nineteenth century, which include testimonies by Liberated Africans and their descendants. Other materials include Arabic letterbooks involving correspondence with indigenous rulers and officials in the interior of the Colony, records of fugitives who escaped slavery from the hinterland, and registers of children whose status in the Colony was sometimes uncertain, if not dubious.

These projects have received additional support from the University of Worcester and the Harriet Tubman Institute for Research on Africa and its Diasporas at York University, Canada.

Posted by Endangered Archives at 10:44 AM