In April six collections were made available through the EAP website and BL Sounds. The variety of subjects, locations, and types of record really highlight the broad range of projects that the Endangered Archives Programme is involved in.

1427 recordings can be listened to on BL Sounds 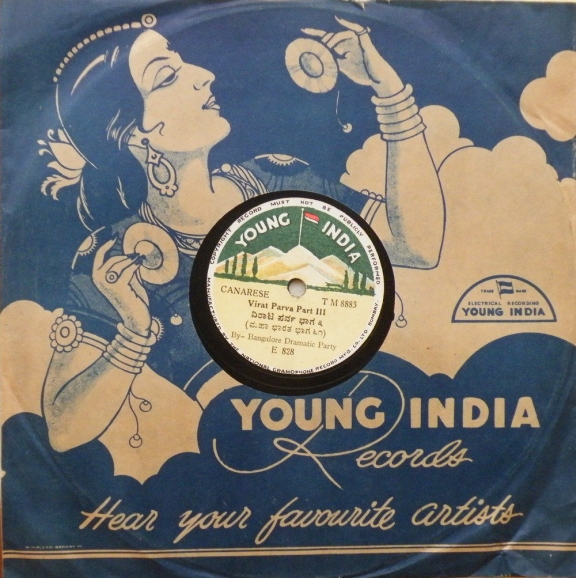 The project digitised gramophone records, disc labels, record catalogues and publicity material from ‘The National Gramophone Record Manufacturing Company Ltd. Bombay’, which issued records under the ‘Young India’ label between 1935-1955. The company produced over 10,000 titles on 78-rpm, 10 inch diameter shellac discs with two songs per disc. The recordings of film, popular, classical and folk music, as well as educational material were issued mainly from amateur or up-and-coming artists. They feature music from different regions of India, sung in many different languages. The recordings have never been reissued on audio tape or CD and are therefore now available for many people to listen to for the first time. We have already received some great feedback about this collection, including one person who recalled his music teacher many years ago telling the students about Young India and how he used to be a tabla player for the label and regular D V Paluskar accompanist. He was delighted to find that he could now hear the actual music that his teacher talked about all those years ago. Hopefully, with this collection now available for anyone to listen to worldwide, many more people will discover or rediscover the recordings from the Young India label.

1404 recordings can be listened to on BL Sounds 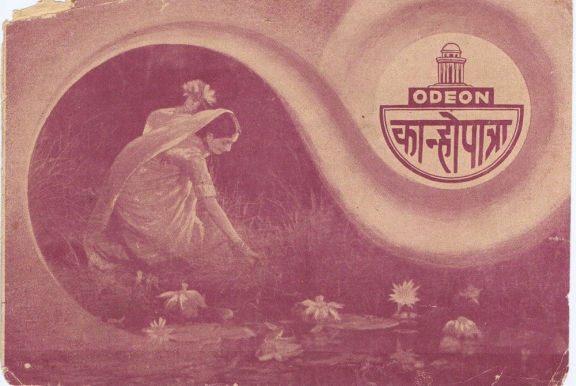 This project digitised shellac discs, record labels and associated ephemera from the Odeon record label. Odeon label shellac discs were issued in India between 1912-1938. The company produced over 2,000 titles of north and south Indian music. About 600 titles [1,200 songs] have survived and are with private collectors

Odeon label shellac discs were issued in India in two phases: during 1912-16; and during 1932-38. During the first phase, Odeon's first Indian recordings were made in late 1906 on a grand tour that took the engineers from Calcutta to Benares, then on to Lucknow, Cawnpore, Delhi, Amritsar, Lahore, Bombay and finally back to Calcutta. In all, they recorded some 700 titles, which were duly shipped back to Berlin for processing and manufacture in what was then the established worldwide pattern. Disc records manufactured and pressed in Germany were shipped back to India by 1908. Gramophone records were the only mode of public and family entertainment in that period. Because of the diversity of language and cultural taste, Odeon's engineers recorded a great deal of regional music for local consumption. In a time before film music swept regional variations away, Odeon's activities allowed Indians to listen to the music that would otherwise have been irretrievable. Very few disc records from this period have survived.

In the second phase, the Odeon disc manufacturing company operated during 1932-38. Its operations were mainly from Mumbai and Madras and the company produced over 2,000 titles in north and south Indian music. At this time, radio and film songs had just entered the entertainment era. Disc manufacturing and distribution activity continued until the outbreak of World War II. Because of the embargo imposed on German goods, the company had to wind up their business in India, leaving behind hundreds of titles. The musical genre recorded on these discs include drama songs, speeches, folk music, classical music, drama sets, skits and plays, vocal and instrumental music.

EAP462: Preservation of Kaya district colonial archives and assessment of the potential and feasibility of recovering other former district capitals' collections, Burkina Faso 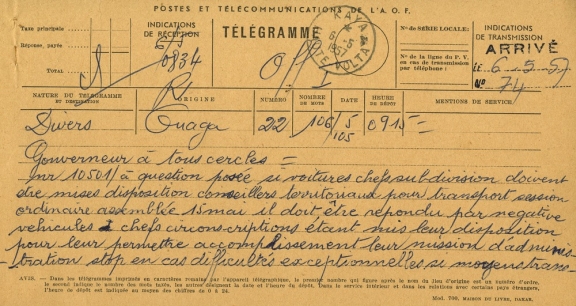 This project digitised a wide variety of documents related to the administration of the Cercle de Kaya colonial district. They are of interest to a wide range of historical study fields: population, politics, economy, development, customary law. These documents provide an insight into the local intricacies of the administration, politics, economy and social life of the district.

The material in Kaya though was at risk of neglect, physical deterioration and destruction. The documents were stacked on shelves and on the floor in a shed behind the administrative buildings, exposed to dust and moisture and at the mercy of rats, termites and mildew. More recent documents continued to be piled haphazardly on top of the old colonial ones. These colonial archives that for decades had been piled up in a shed in the former colonial district capital, Kaya, were packed up and transported to the Centre National des Archives (CNA) in Ouagadougou. At the CNA, the documents were thoroughly dusted and subsequently sorted, selected and subjected to an initial analysis. The documents were sorted into 4,200 files, with an average of 20 documents per file. Of these, about 40% were from the period 1919-1960 and eligible for digitisation.

Unfortunately, very little metadata was provided with this collection so file descriptions and titles are very limited. If you would like to volunteer your time to making this collection a more usable resource, please get in touch with us. 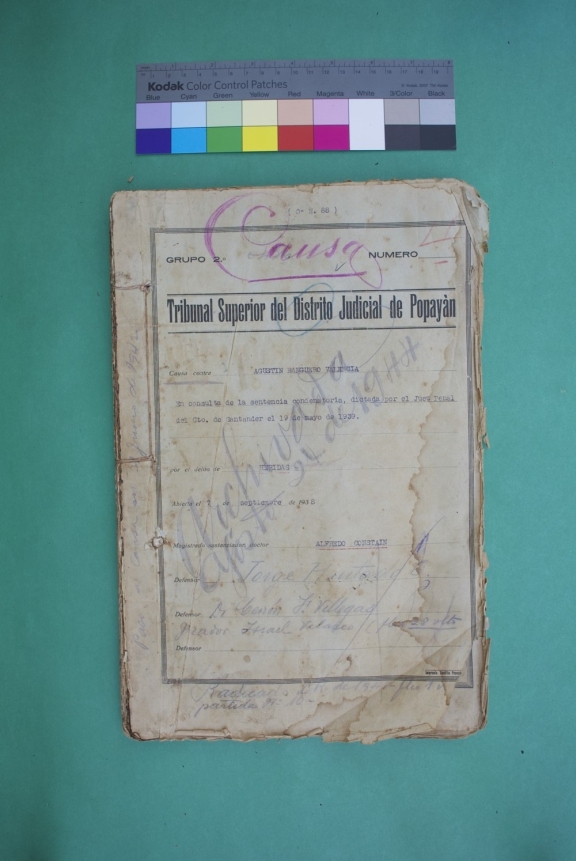 This project made an inventory of the historical, notarial and judicial collections held in Caloto’s alcaldía (town hall), Colombia, and digitised a sample of the most valuable and damaged documents.

First founded in 1543, Caloto Viejo (Old Caloto) was the administrative capital of a wide region northeast of Popayán that included Native American groups, European settlers, their enslaved Africans, and maroon communities formed by escaped slaves. By the 1940s this rural region had not yet experienced industrialisation, yet many of Caloto Viejo’s towns had become autonomous districts. Now only the head of a small municipality, Caloto still houses the pre-modern documents of Caloto Viejo.

Caloto Viejo’s documents are crucial for Afro-Colombian history. Caloto and adjacent regions of the Cauca constituted the nineteenth century heartland of slavery, with Julio Arboleda’s massive Japio estate in Caloto the towering symbol of landholding power. The archives of Caloto are important for tracing the wider history of elites, native Americans, and Africans, and essential for salvaging the local history of important Afro-Colombian towns such as Puerto Tejada or the scholarly unknown maroon community of Caricacé with unique linguistic traditions, whose documentary history exists only in the endangered collections of Caloto. 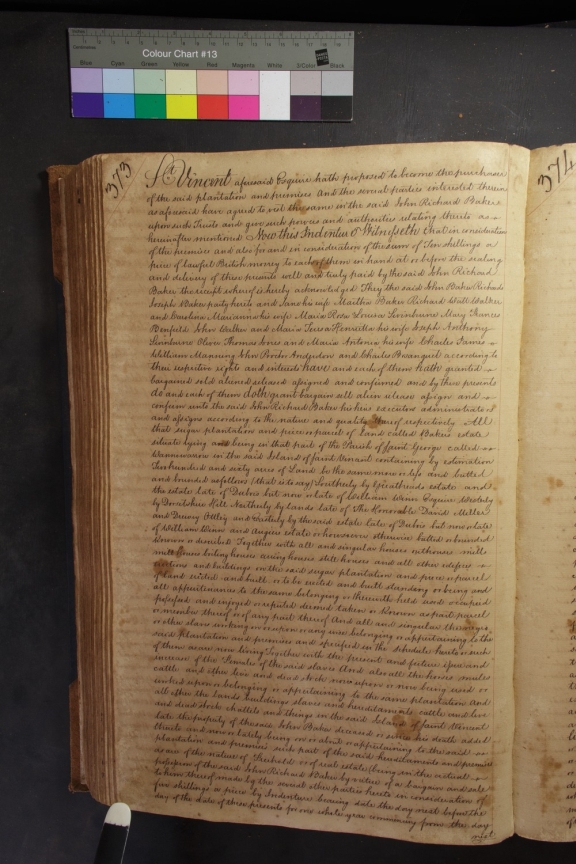 The Eastern Caribbean Court House, St Vincent, holds numerous historic manuscript documents connected with the colonial administration of the island. The earliest records date from 1763, when Saint Vincent was ceded to Britain at the end of the Seven Years’ War, until 1838, the date when Apprenticeship for slaves ended in the British Caribbean and slave emancipation was fully implemented in accordance with the Emancipation Act of 1834.

The Deed books include important material for researchers. After 1763, Saint Vincent was drawn into the orbit of slavery in the British Empire. Its sugar plantation sector expanded rapidly after that date and the island became (along with other Windward Islands such as Dominica, Grenada and Tobago) a new, expanding frontier for British slavery. The Deed books, compiled in the offices of the island’s Colonial Secretary and the Registrar, proved a comprehensive record of all land and property transactions carried out during the seventy-five years when slave plantations were the main type of investment and employment on the island. The Deed books are large bound volumes that are available for every year in the period from 1763 to 1838. The land and property details recorded in these records provide the names of investors, along with their occupation and residence, and precise financial details, either in sterling or in the island’s currency. The information on investors includes whites and free blacks, men and women, and absentee residents (in other West Indian Islands or in Britain) as well as those living in Saint Vincent. The financial information is wide-ranging. Credit transactions are included. Mortgages, annuities, loans and bonds are all specified, with the names of the parties involved. The Deed books contain much material on slave sales between individuals connected with Saint Vincent and they also have information on slave manumissions. Where sugar plantations are identified in these records, the numbers, and sometimes the valuations, of slaves are given. This is particularly useful for researchers for the period from 1763 to 1815 because it was not until after the end of the Napoleonic Wars that slave registration was commonly carried out throughout the British Caribbean.

EAP749: The narrative and ritual texts, narrative paintings and other performance related material belonging to the Buchen of Pin Valley, India The Buchen are performers of specialist rituals, travelling actors, healers and exorcists, and disciples of the 14th/15th century Tibetan ‘crazy saint’ Tangtong Gyalpo. They reside in the culturally Tibetan Pin Valley in North India and are most famous for performing an elaborate exorcism ritual called the ‘Ceremony of Breaking the Stone’.

Buchen enact dramatisations of popular folk-tales, Buddhist morality plays which illustrate principles of karma and ideas of impermanence and are frequently enlivened with comedy. Buchen spread the teachings of Buddha through entertainment. These performances are related to the Tibetan Opera and to a tradition of lay religious performers called lama manipa, who retell the life stories of Tibetan saints whilst pointing out key scenes on narrative painted cloth scrolls (thangkas) with a metal pointer. Buchen theatrical performances contain a similar manipa-like introduction.

This project digitised or took images of a variety of texts, paintings and objects associated with these traditions, including images of masks, clothing, instruments and objects used in performances; thangkas; handwritten decorated and unbound Tibetan books (pecha). 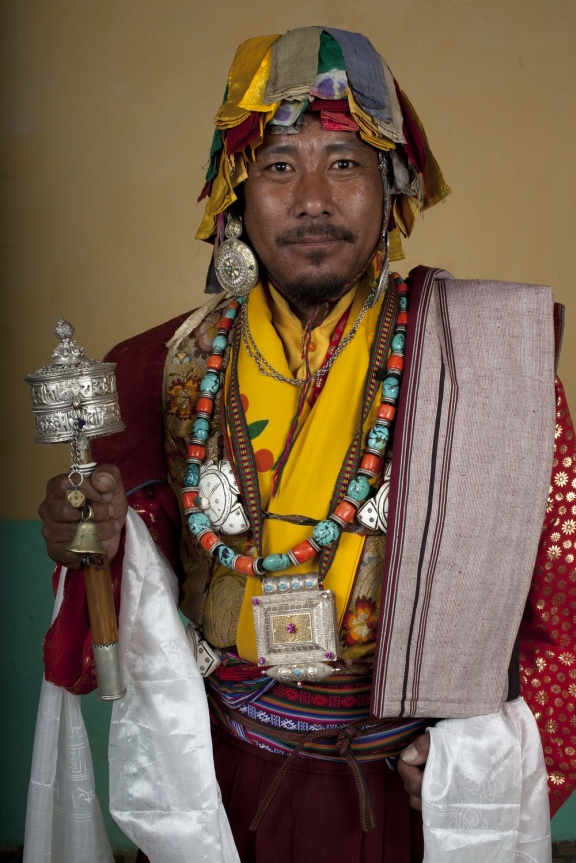 Posted by Endangered Archives at 4:07 PM