Recently we were contacted by Tom McCall who was researching his family’s history. He wrote: "One relative that I have been researching was Major Anthony Gilchrist McCall OBE who joined the Indian Civil Service from 1921 until 1945, spending the majority of that time as Superintendent of the Lushai Hills District in North East India.

He published a book called Lushai Chrysalis and sent a copy to Eleanor Roosevelt, who he had heard was a critic of British Colonial administration. The letter he sent was light hearted, but he did receive a reply from Eleanor, who promised to read his book.

I discovered EAP454: Locating and surveying early religious and related records in Mizoram, India and was thrilled to find a photograph of Tony, (as he was known to the family) with his wife and a large group of locals, at his farewell in 1945. This was the first photograph that I had seen of him in India and was of immense interest to me and my family. Since then as the project has added more material, I have checked back periodically and have since found three more photographs of him. 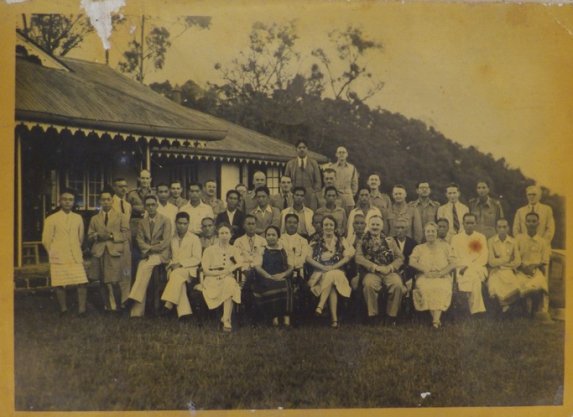 The material and history that EAP is preserving cannot be underestimated, especially for someone looking for information and photographs of family members that would otherwise have been lost or destroyed."

If you have discovered interesting stories amongst the EAP archives we would like to hear from you. It may be something connected with your family or local history. Perhaps the photographic collections have inspired you creatively in a different way. We would also like to hear from you if you have been accessing the collections for academic purposes – perhaps you have uncovered some previously unknown facts that have come to light within the pages of the digitised manuscripts.

Whatever you have found – do get in touch, we’d love to know.

Posted by Endangered Archives at 10:08 AM