A Royal Proposal of Marriage

Now well into our digitisation workflow process, team EAP880 all took some time out mesmerised by the contents of one particular file… 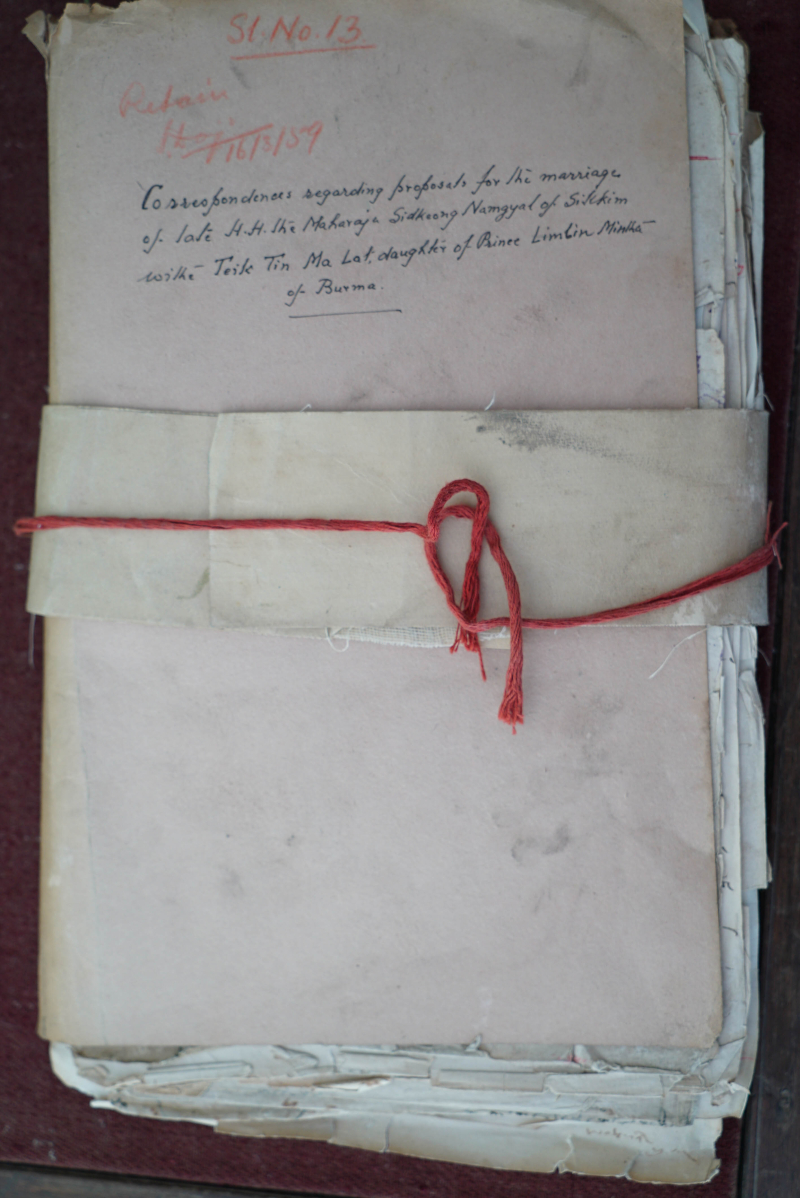 Caught at the crossworlds of British India, Tibetan Buddhism, and Burmese political transitions, this file captures the furtive and subsequent official engagement between a Himalayan prince, HRH Sidkeong Tulku of Sikkim (1879-1914) and a Burmese princess-in-exile, HRH Teik-Tin Ma Lat (b.1894).

Through first-hand accounts, it provides a rare lens into the emerging internationalism of the era touching upon Britain, Ladakh, India, Sikkim, Tibet, Burma, and Japan. It takes us through the couple’s first meeting, their love letters, their differences, and their wedding plans, and culminates with the Prince’s untimely and mysterious death—three months before his wedding—at age 35. 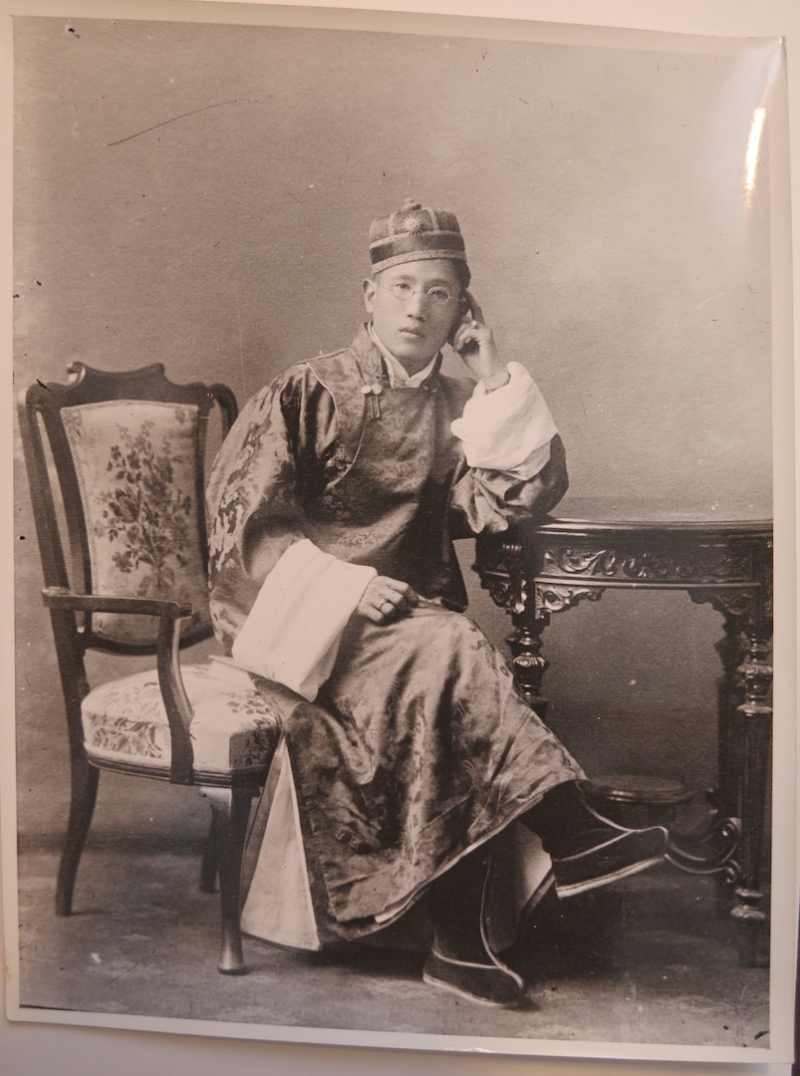 Prince Sidkeong Tulku Namgyal was never destined for the throne: As the second son of Sikkim’s 9th Chogyal (King) Thutob Namgyal and a recognised reincarnate lama he had taken monastic vows of celibacy and was beginning his Buddhist studies in the monastery. 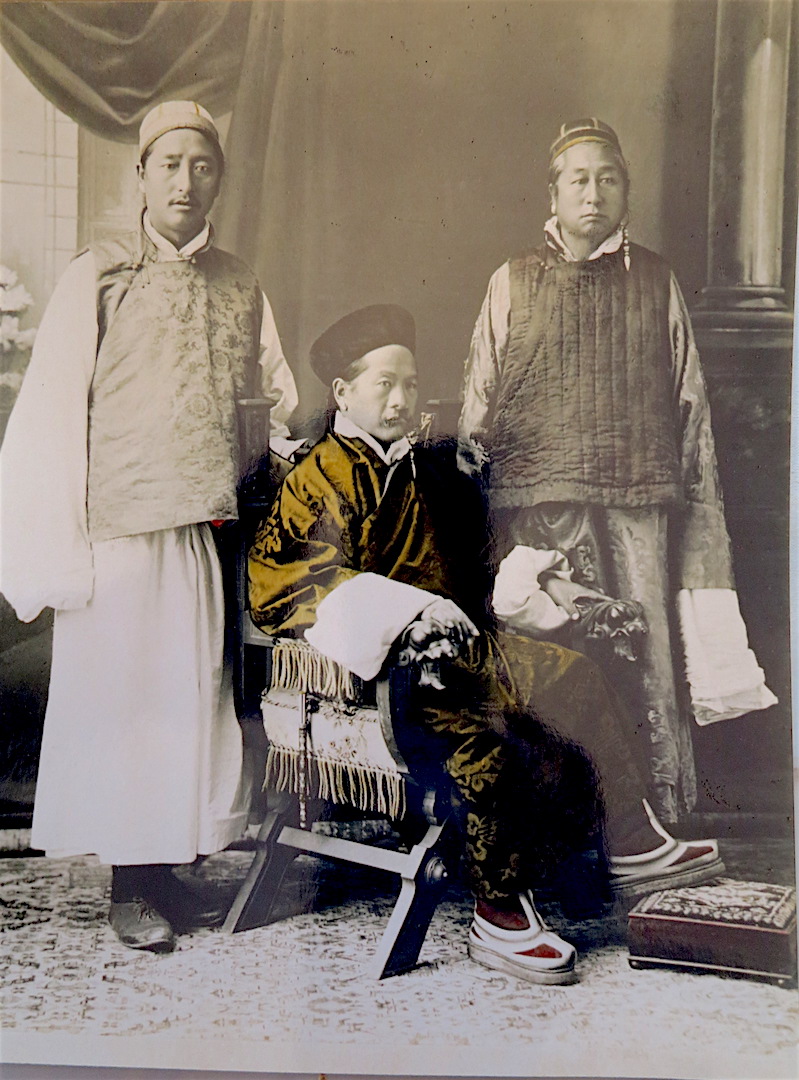 However, his father’s reign had been characterised by waves of aggression from both modern day Nepal and Bhutan, and—in a regional theatre dominated by the Great Game—increasing British interventionism as the latter strove to counter a perceived Russian influence in Lhasa. It was through the Sikkim Himalayas that they saw their greatest chances of success.

Increasingly wary of the scope of Tibetan belligerence, the British sought to exert influence over Sikkim’s politics: On refusing to recall Crown Prince Tsodag from their summer estates in Chumbi (Tibet), the British held the Chogyal and his family, for two years near Darjeeling – ironically, a tract of land leased to them by the 8th Chogyal of Sikkim.

While in captivity, the Chogyal—out of mistrust of British intention and fear for his son’s life—maintained his refusal to order the Crown Prince’s return. He was finally released when the Viceroy of India, authorised the removal of the Crown Prince from the line of the succession, and investing Prince Sidkeong Tulku as heir apparent. And so, began the generous grooming of Prince Sidkeong Tulku Namgyal. 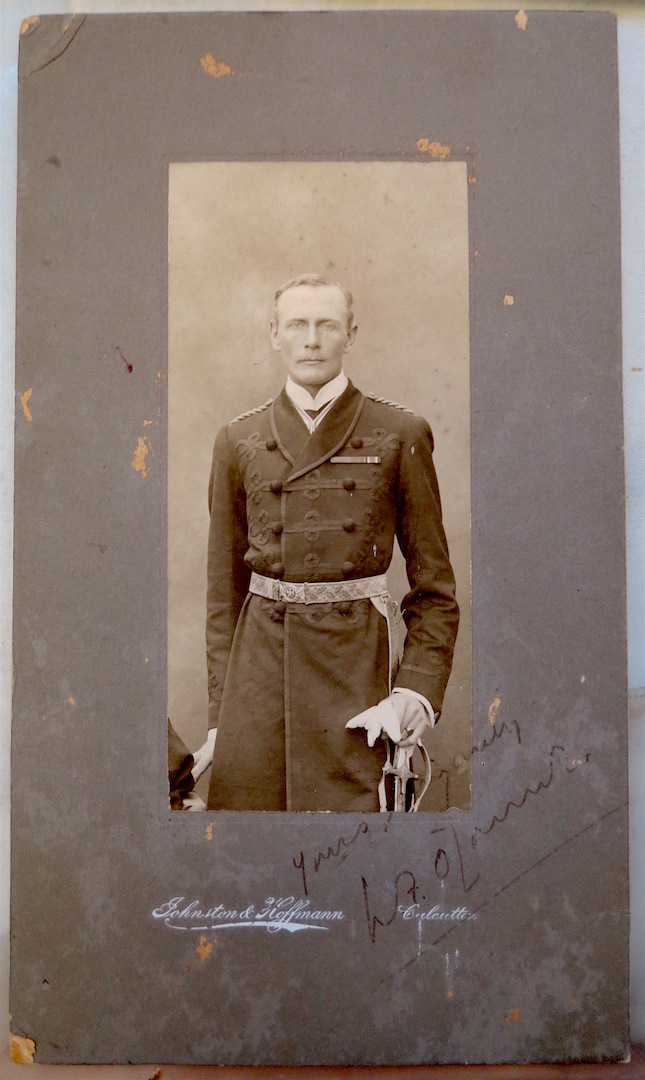 After a brief stint with Sarat Chandra Das and at St. Paul’s School (Darjeeling), the prince went to Pembroke College, Oxford University (1906-08), during which time he was under the care of Lt. Col. O’Connor with whom he became quite close, and John Claude White (Political Officer, Sikkim). 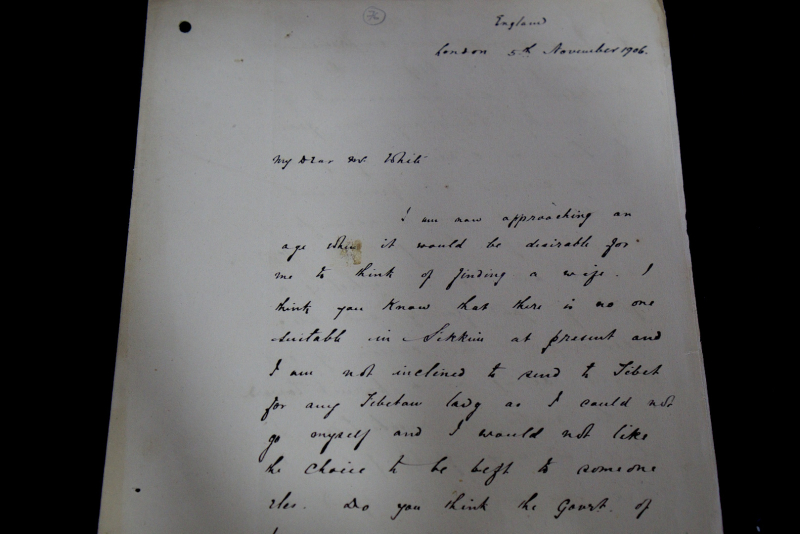 By 1906, Sikkim’s new Crown Prince decided he should soon marry and began a search for a well-educated woman with a compatible fluency in English, and a shared Buddhist heritage.

Though the Government of India had no objection, the Chogyal of Sikkim, still raw from the treatment he had been subjected to and perhaps moved deeply by his devotion to the Buddha dharma, held the opinion that the Prince—an incarnation of a lama—should refrain from both marriage and activity in worldly affairs, in favour of spiritual practice. The British, in contrast, were only too eager to help the Crown Prince! 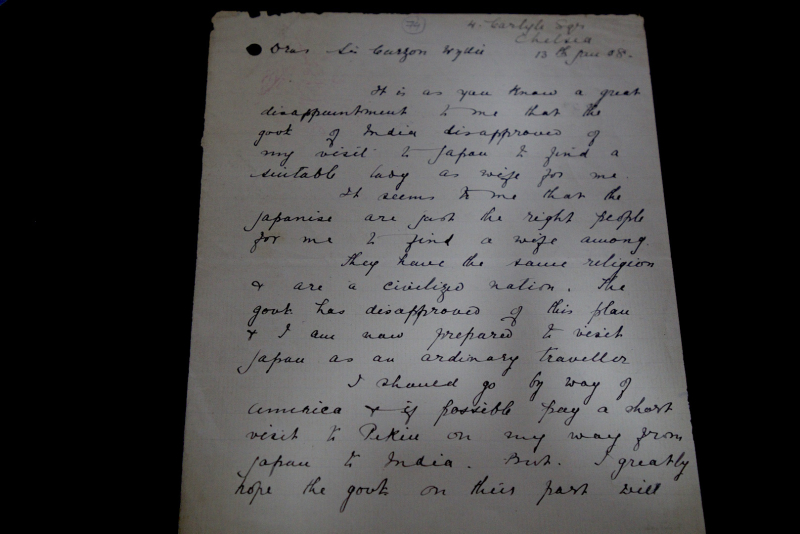 Prince Sidkeong Tulku—in admiration of Japanese culture—wished to marry a Japanese. During a visit to Japan, the British Ambassador bore the responsibility of inviting Sidkeong to various dances and dinners, but with no obvious match made, the Government of India decided that a Burmese would be preferable, as unlike Japan, Tibet, or Siam, Burma was under British rule. 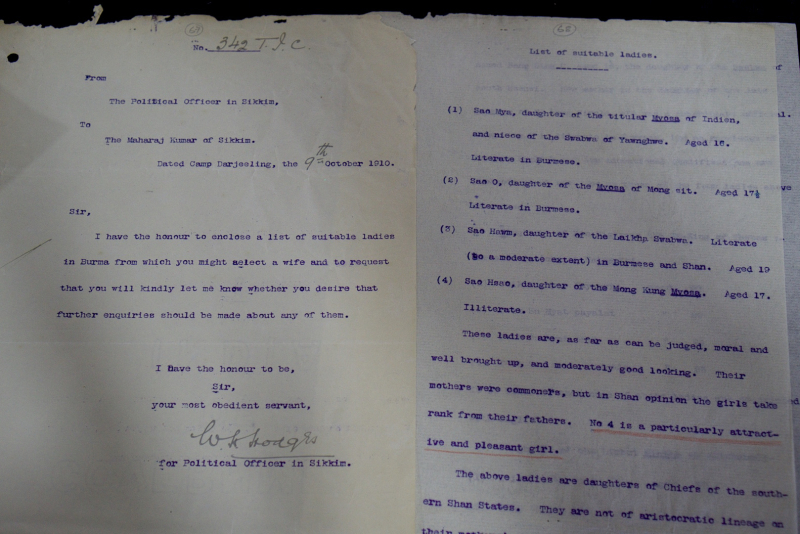 It then fell on the Government of Burma to provide a list of suitable ladies, and the respective governments of Bombay and the United Provinces, to provide lists of Burma’s royal lineage ladies whose families were living in exile in India. These were  presented to the Prince in late 1910.

The Prince of Limbin (Limbin Mintha), a grandson of King Tharrawaddy, and his daughters were living in Allahabad, which, in December 1910 was (rather conveniently) preparing to host the the three-month Allahabad Exhibition. This provided the perfect opportunity for Prince Sidkeong to meet Limbin Mintha’s family, while arousing minimal suspician at home.

Accompanied by Kazi Gyaltsen to Allahabad, Prince Sidkeong hosted a dinner party for Limbin Mintha and gifted Princess Ma Lat an image of the Buddha and a basket of Sikkim oranges. After a few meetings, Charles Bell (Political Officer, Sikkim) noted that the prince had not made a decision and that he had instead requested enquiries to be made for potential brides in Siam, Kashmir, Ladakh, and again in Japan.

However, finding a woman in Siam educated in English proved too difficult, and though one Shimchung Gialmon Lhadun of Mathu (Ladakh) was suggested, the Prince disapproved of her illiteracy (despite remarking on her physical beauty).

Again, in 1911, he wrote to Colin J. Davidson (Assistant Secretary, British Embassy in Japan) requesting his help in finding a suitable bride, however, the Anglo-Japan relation was deteriorating and Davidson advised against this, citing in addition that, “The knowledge they (Japanese ladies) acquire is very meagre and as a rule almost useless for practical purposes…”

So it was in 1912 that Prince Sidkeong chose to marry Princess Ma Lat, whose family by this time had returned to Rangoon, despite the fact that on principle, his father—the Chogyal—still opposed any marriage just as he had in 1908. 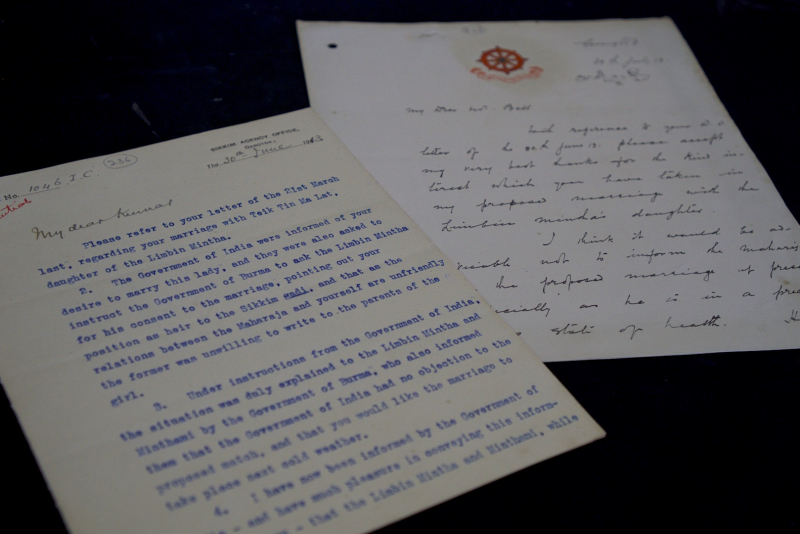 Instead, the Government of India assumed the role of a negotiater securing the consent of Limbin Mintha for his daughter’s hand in marriage. Prince Sidkeong advised that the Chogyal should not yet be informed due to the seriousness of his father’s illness. Yet in the meantime, the Prince made a visit to Rangoon, to fulfill the dual purpose of both pilgrimage and proposal. 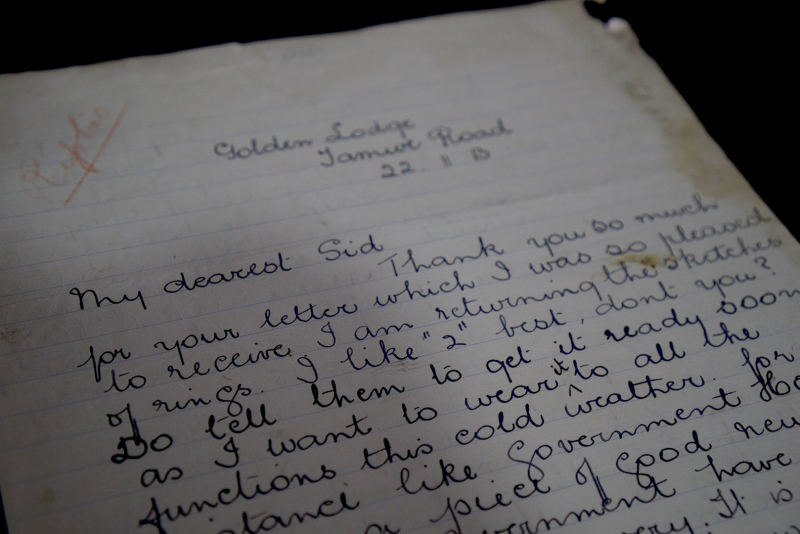 The initial 1913 Rangoon wedding date was repeatedly postponed by the Prince whose concern for his father’s deteriorating health became his priority. However, over the course of a regular correspondence between the engaged, the Prince and Princess exchanged letters discussing designs of the wedding dress and rings, as well as expenses. 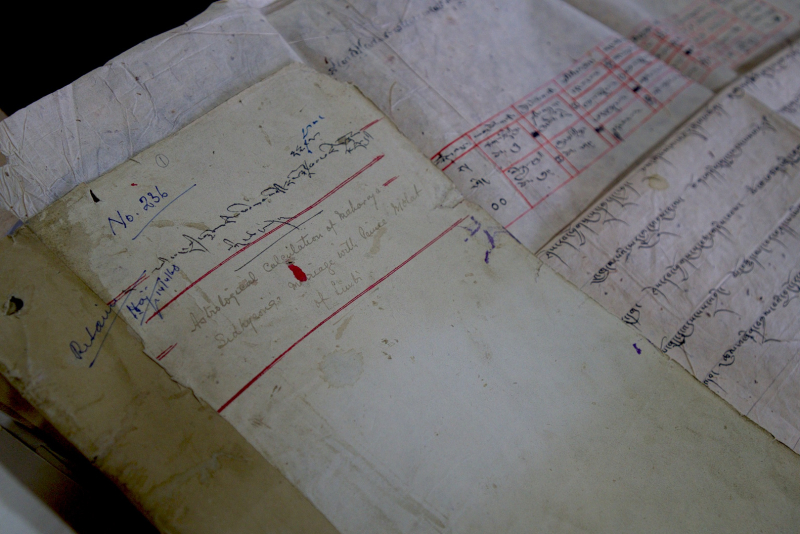 Photo: Sub-folder of astrological calculations for the marriage of Prince Sidkeong Tulku of Sikkim with Princess Ma Lat of Limbin (Burma)

In June 1914—as per Sikkimese custom—an astrologer was consulted on whose advice the Prince set the wedding for 24th January 1915 in Rangoon. Meanwhile, the Princess Ma Lat had requested Sidkeong to send her a Sikkimese ayah in order to help familiarise herself with Sikkimese culture. (The Prince advises Ma Lat to read more books instead!)

On 10th February, 1914, Chogyal Thutob Namgyal passed away. The prince wrote to his fiancée explaining the Sikkimese custom of one year’s mourning, which was especially important given there was some disapproval of the match in Sikkim. Moreover, he notes that Britain was now at war with Germany and under such situations, officials were busy with war efforts. 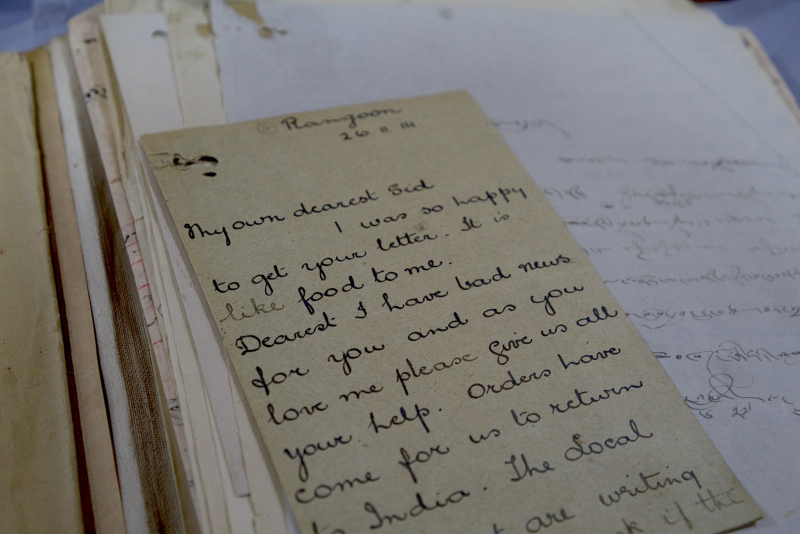 This was likely the last letter the Prince received from his fiancée for after only nine months on the throne, in December 1914, Prince Sidkeong Tulku died in what the British call “mysterious circumstances” while ill in bed, just one month before his marriage.

Posted by Endangered Archives at 10:19 AM