The NRM had been involved with SLNRM since 2005, when its founder, Col Steve Davies MBE invited the Director, Andrew Scott CBE to attend the official opening that March. At the time, we were fortunate to get a grant from the British Council, under Tony Blair’s Africa Programme, to cover the cost of a small number of advisory visits and a UK based training programme for the newly appointed staff there, who had never seen a train in action, let alone a steam engine!

As the history of Sierra Leone is one of British slavery and colonialism, much of it is shared across our two nations, including the story of the railways – built during the colonial period in the 1890s and closing in 1975 after only fourteen years of independence. This means that the museum is equally relevant to us in the UK as it is in Sierra Leone.

It was somewhat miraculous that the collection of locomotives and rolling stock which form the core of the SLNRM collection had survived more than ten years of bloody civil war, housed in the heart of the former National Railway Workshops, which had become a refugee camp for some 10,000 displaced persons.

Several documents and images had been found in the pits of the building and inside some of the vehicles at the time when the museum was being developed. They included, tickets, files, notebooks, wagon labels and operating manuals, stores receipts, postcards, stamps. On setting up the museum, Colonel Davies and the Museum Coordinator (and former Workshop Manager) Mohamed Bangura, managed to gather a small number of photographs, postcards, tickets and other ephemera from former railwaymen and other sources in Sierra Leone and the UK. 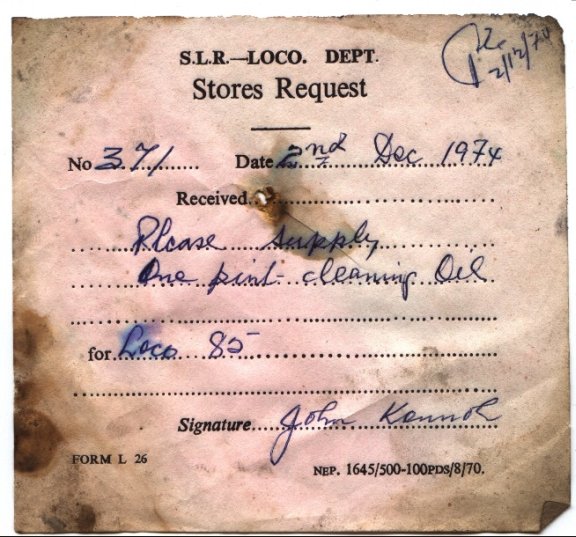 This material was piled in the corner of a showcase in the museum, not properly stored and there was no proper provision for its care or access. It was kept in heaps in unsuitably hot and humid conditions and was vulnerable to damage from movement, light exposure and dust. It was un-catalogued, with the exception of a small number of tickets and wagon labels, so inaccessible to visitors or researchers, and vulnerable to loss or theft.

The material known at the time dated largely from the 1930s through to the official closure of the railway in 1975, which seemed somewhat unusual in terms of EAP projects. However, we felt that, whilst this may not be recognised in the UK as pre-industrial, in Sierra Leonean terms it was pre-modern, since we would argue that the modern era began in 2001, with the end of the war in which much material evidence had been destroyed, and the beginning of a new era of peace and democracy. Photographs found in the museum, faded and embrittled by the harsh climate.

We managed to put together a preliminary EAP application in October 2012 and were delighted when we received a letter from Cathy Collins that December, to say that the International Advisory Panel would like us to submit a full application for the project. We were advised to apply for a pilot project, as there was clearly much work to be done to identify what, if any, further material existed.

As there are few people left in the country who remember the railway in operation, it was essential that any surviving archives were located, preserved and catalogued as quickly as possible and that storage and access facilities created. We also wanted to ensure that proper training was given to the museum staff so that they could properly care for the collection.

We had until February 2013 to make the full application and this was the tricky part. Sierra Leone’s postal service was largely dysfunctional and connectivity limited and rather sporadic which meant that communication with the museum was not easy. However, through the good offices of a well connect ex-pat friend in Freetown we did manage to get agreement from the museum that they wished to undertake the project in partnership with us and that they would provide the necessary information, references and electronic signatures.

A formal application was eventually submitted on time and then all we had to do was sit back and chew our nails. We were delighted when we received a further letter from Cathy Collins in July 2013 agreeing to a grant of up to £15,266 over 10 months to complete our project.

We got started as soon as the paperwork was completed – purchasing the necessary materials and equipment needed, arranging shipping to Sierra Leone and planning our visit. In November 2013, we made the first visit to set up the equipment, test photograph the material held at the museum and to research what other material we might find. I’m not going to talk about the detail of all that here, as Archivist Tim Proctor can tell that story better than me [in a future EAP blog post].

One thing that is worth highlighting is the gratitude of the Sierra Leone people, who were delighted that a British public body was prepared to support Sierra Leone heritage and we were feted by the Ministry of Tourism & Cultural Affairs for making it happen, with a grand reception at the SLNRM and a police escort to get there through the horrendous Freetown Traffic! Tourism and culture had recently been listed as part of Pillar One in the Agenda for Prosperity – the new Sierra Leone strategic plan and so museums and other attractions were sharing a spot of the limelight. 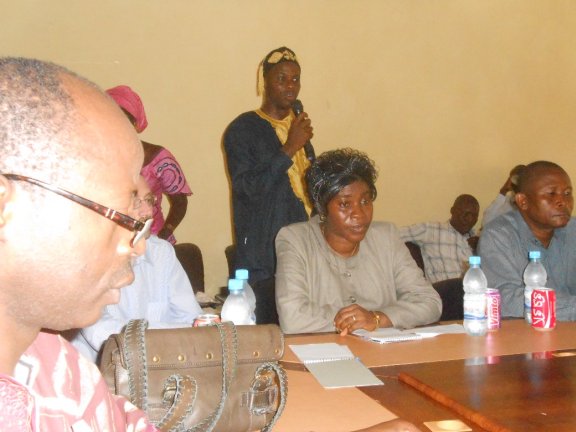 Press Conference at the Ministry of Tourism & Cultural Affairs, widespread media coverage for launch of EAP626 in Sierra Leone

A second visit to complete the photography was planned for spring 2014.

We were glad that we had planned two visits rather than one, as the first set of photographs were not as good quality as we had hoped, and needed to be repeated. However, we were amazingly lucky to meet a fellow at the National Archives who had already been doing some work for another EAP project and understood the requirements. That was a godsend given what happened before we got out there for the second visit. When Ebola broke out it very quickly became clear that our 2014 visit would not be able to take place.

The EAP team were extremely supportive and agreed that project completion would be delayed until the Ebola crisis ended and Foreign Office advice permitted travel to Freetown.

In the event, we had to wait until March 2015 before we could safely travel. During this visit, we were able to see real growth in the museum, following the appointment of a new Chair of the Monuments & Relics Commission – the governing agency for heritage and the appointment of a new Coordinator for the SLNRM. A restructuring of the museum team had also taken place and an Education & Outreach Officer appointed, along with a Museum Clerk. This is great news, as it means that the work we have done to catalogue and digitise the collection will be used to good effect in country as well as through the online resources developed under EAP.

A little goes a long way in Sierra Leone and the impact of this project will be significant and far-reaching.

Many thanks to everyone who made it possible both in the UK and in Sierra Leone.

Posted by Endangered Archives at 10:13 AM