When the main earthquake struck in April 2015 Ram and Homenath were working within the Museum building. They ran outside to the temple courtyard as the top story of the temple crashed to the ground. Once the red tiles beneath their feet became stable and the temple buildings ceased to sway, they surveyed the damage. The building on the North of the quadrangle that housed the Music Museum was cracked but still standing. They did not go back inside, but locked the door and went home to check the safety of their families. Despite the frequent aftershocks they returned the next day and ventured inside. Instruments had fallen to the floor and several had been damaged by falling debris. The room that housed the archive materials was in total disarray. Cassettes, manuscripts and mini-dvs were strewn across the floor covered with dust, bricks and a fallen beam. 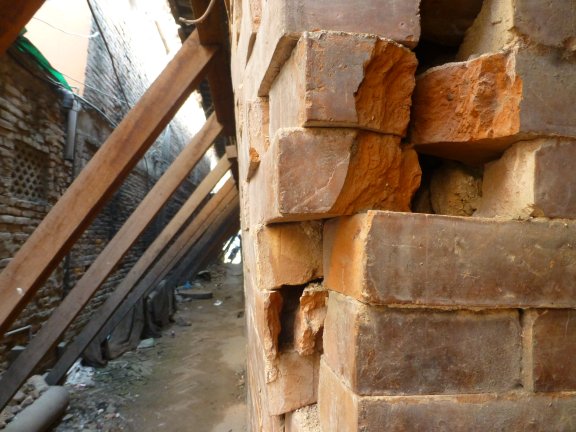 But let’s step back to before that day. Nepal has folk songs and melodies, and the musical instruments to accompany them that have been passed down through the generations for hundreds of years. Some were sung and played by the community as a whole, others were the specific domain of the musician castes or the wandering minstrel castes. Some were sung and played for specific festivals and ceremonies that happen annually. Some were sung in the fields while planting or weeding rice, whilst others were sung by the whole community once the harvest was in and it was time to celebrate. Some were sung by the minstrels as they travelled from village to village with news of what was happening elsewhere. Others still were hymns of praise to specific gods or were sacred epic stories and poems. Others again were simply love songs of young people who could not be together or the laments of women whose husbands have been forced by poverty to seek employment in a foreign land. Some were the humorous flirtations of a man with his sister in law, and others still were the sacred songs of Buddhist ritual dances performed in secret.

The folk music tradition of Nepal was rich. The instruments, music, songs and dances of the diverse ethnic groups of Nepal are unique in the world, yet so much has been lost over the last few generations. With the deliberate burning of Newari monastery libraries in the 1840s, the written record of music and dance culture in Nepal is very rare. Until the last two to three generations, Nepal has been a predominantly oral culture. The archive since pre-modern times has actually been in the hearts and minds of an increasingly aging and diminishing pool of artists. In a country where the priority of the majority is to meet very basic needs for food, shelter, health care and education; no official action has been taken to halt this decline.

Therefore Ram Prasad Kadel decided to make it his life’s work to record and preserve as much of Nepal's musical heritage as possible. He began making tape recordings in 1997 to add to hand written notes, testimonies, song lyrics and other records made since establishing the Nepali Folk Musical Instrument Museum in 1995. The museum later became the Music Museum of Nepal, which is entirely run on a voluntary basis. Over the years, Ram and various friends of the Museum have identified and tracked down key communities and individuals who still have the folk music skills and knowledge. The collection now also includes additional donated recordings, a significant number of which predate the work of the Museum. The archive at the Museum is currently the only way that present and future generations in Nepal, and international researchers, can access the playing of instruments that have all but died out, the melodies and lyrics of songs which are no longer sung, and dances and ceremonies which are rarely or no longer performed.

The audio cassettes and mini dv tapes, manuscript books and photographs in the archive, however, have been damaged by a range of factors - by light, dust, atmospheric pollution, mould and silverfish. And then they were shaken off the shelves to the floor and broken by falling bricks during those earthquakes that critically damaged the temple building in which the museum and archive were based. 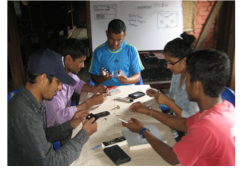 But the good news is that Ram and the other staff at the Museum are determined to preserve as much of the archive as possible, and through the support of the Endangered Archives Programme (EAP901) they are able to do that. Hence EAP 901 is about preserving the unique music and dance archive at the Museum by transferring the most endangered material to a digital format. The archive is highly vulnerable because of damage to the existing formats and because once they deteriorate beyond the point of digital capture they are irreplaceable. Many of the artists whose work is represented in the archive have already died. Elders that remain grieved that they have little or no opportunity to transfer their knowledge of melodies, lyrics, dance steps, mudras, secret and sacred rituals, musical instrument playing techniques and instrument-making skills to the younger generations. They find some solace in the fact that it has been recorded. 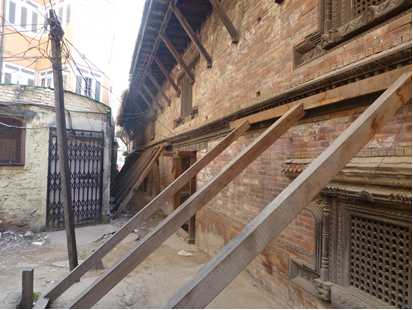 The building that houses the Museum was shored up from behind and stabilised by the archaeology department soon after the earthquakes. Several opportunities of a safe place for the Museum's collections appeared to present themselves over the last 22 months, but none actually materialised. Despite this, the Museum's work had to continue and its commitments had to be met. Gradually Ram and the team regained some confidence to enter the building, initially just for salvage, but later to clean up the mess and eventually to continue to use the existing building when the frequency of after-shocks had lessened considerably. A temporary office was constructed on the ground floor close to the door to allow for swift exit if necessary. The instrument display has been cleaned and rearranged (by generous volunteers), broken instruments replaced and the archive has also been largely rescued and cleaned up with some of the most valuable salvaged analogue recordings still being stored in Ram's house. The Museum is now receiving visitors as it did before the earthquake. 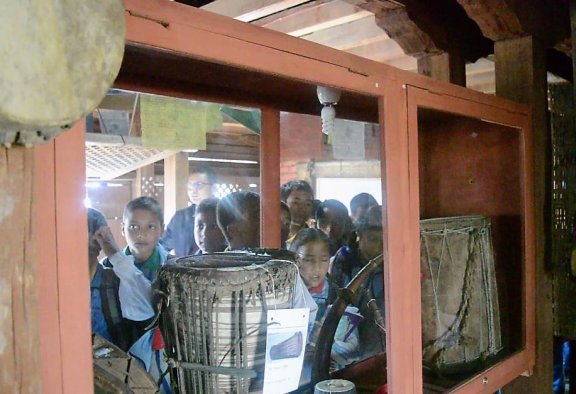 At the moment, there is no definite prospect of relocating the museum and no definite plan to repair the existing building either. However, the team never gives up hope, as demolition and rebuilding work goes on all around them, that the building will be satisfactorily repaired one day or that they will be able to find a new location. 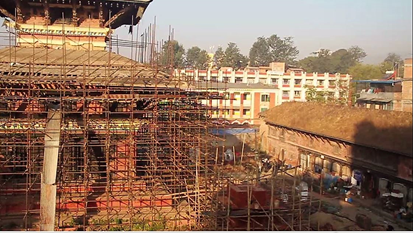 The work of preserving the archive currently continues from the temporary office. Without the EAP grant to enable the digital reproduction, the archive would undoubtedly deteriorate further and likely be lost, so the team are working with great enthusiasm and dedication to preserve as much as possible.

Posted by Endangered Archives at 8:37 AM