A new chapter in the story of Timbuktu’s manuscripts: Sample digitisation of materials from the Infa Yattara Family Library

Thursday, January 26th, it’s my last day of exploration in the Infa Yattara Family Library (IYFL) and of enduring the now familiar route to its location in the newly built-up eastern outskirts of Bamako. The Yirmadjio district has become home to many Malians from Timbuktu who have sought refuge in the capital during the recent violence and instability that have disrupted the northern regions of the country.  My taxi awaits. I brace myself to inhale once more with the searing ambrosia of the Malian capital’s thoroughfares, a suffocating mix of dust, diesel exhaust and other particulates that rake the bronchial passages. The more pleasing concoction of minute inhalants still await at the library: a thin haze composed of nearly microscopic flecks of manuscript paper that are unavoidably created when folios are handled and the dry mold one brushes off a tooled leather binding. I find that it goes well with cola, others prefer the bottled water or a shot of sweet Malian tea. 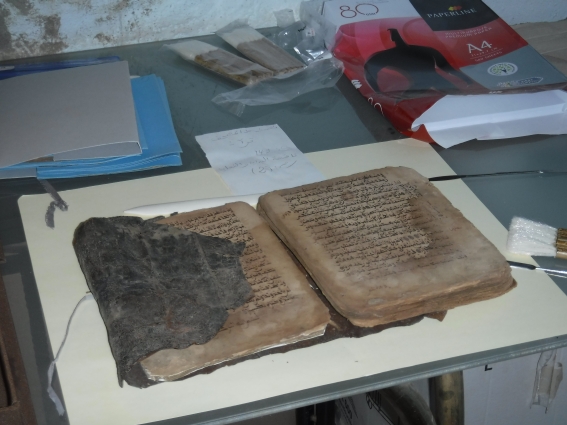 Example of a manuscript from the IFYL collection. Note the powdery dry mold on the leather binding wrap

Madame Fati greets me at the door when I arrive, and Daniel, my apprentice who is learning the art of manuscript photography among other aspects of basic preservation, descends, two steps at a time, wearing his habitual wide grin and embraces me with his slender frame. We make our way back up from the residence’s courtyard, to the library proper, secured by not one, but two, steel gates, a reminder of the precious materials which this unassuming house conceals and the desire to protect them adequately.  Having gained access to the room in which steel cabinets house the roughly 4000 manuscripts, my entrance disturbs the dove nesting in the window facing the street below. That too, offers a certain symbolism, though I refrain from interpreting the omen presented by the tiny egg that went missing at one point during our month-long pilot project. 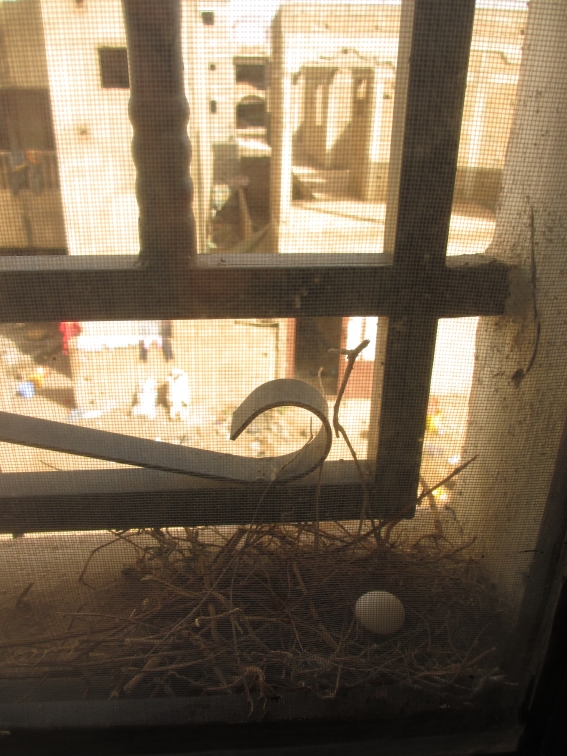 The libraries of Timbuktu, and the abundance of centuries-old manuscripts they contain, have consistently attracted the attention of international media during the past five years. That coverage, however, has not been devoted solely to stories of scholarly discoveries regarding one of West Africa’s most productive scholarly centers of the pre-colonial period.  Instead, accounts have largely focused on the threat to these troves of knowledge during the town’s occupation by the al-Qaeda linked militants of Ansar Dine which began in 2012. To be fair, much ink has also been devoted to the optimistic story of local Malian efforts, often with support from outside donors and experts, to secret away a large percentage of these endangered manuscripts to the safety of Bamako, where they remain today.

Like the manuscripts, the Yattara family was forced to flee their home in Timbuktu shortly after the militant occupation. Yet, despite open death threats – Pastor Yattara was specifically target because of his role as a prominent leader in the small, but vibrant, Christian community of the city – they managed to arrange the removal of much of their private manuscript library before their property was ransacked.  Like dozens of other families, whose collections can range from a few hundred to tens of thousands of works, their holdings received sanctuary in the Malian capital under the auspices SAVAMA, a local NGO dedicated to the protection, preservation and study of these material. Founded by a scholar-librarian of Timbuktu, Dr. Abdel Kader Haidara, and with the support of various private foundations and other international partners, the SAVAMA team has assumed responsibility as temporary caretakers of this fragile class of movable heritage. 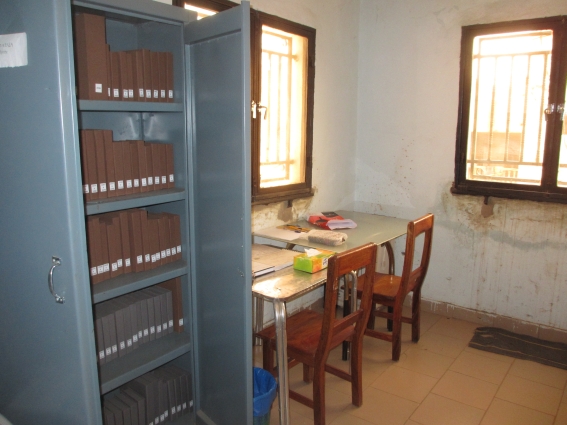 In the case of the IYFL collection much of the material was rehoused in archival boxes and folders and a preliminary listing of the library’s holdings was created. At the family’s request, having themselves resigned to resettle indefinitely in Bamako, the collection was returned and relocated in their newly constructed residence that could both accommodate the library and facilitate further study of its contents. To my knowledge, they are the first of such family whose library to has gone through this complete cycle of relocation. Most continue to remain in SAVAMA’s care with their continuing efforts to stabilize and document those collections. Enter the EAP and its support for our pilot project whose goals have been to evaluate the continuing preservation needs of the collection, to provide training in the use of archival materials and photographic equipment which we supplied, to assess the strengths of the holdings for future scholarship, and to digitise a representative sample of the manuscripts for open access. 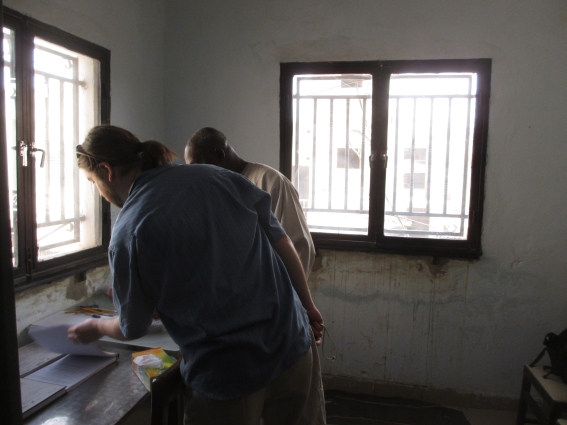 An additional aim of the project has been to document the history of the collection in order to better contextualize how this new chapter in its biography marks both a continuation of its relationship to furthering knowledge, and the establishment of new forms of engagement with publics that could never have been imagined by those individuals who had initially put pen to paper.  The library has formed over the life of Pastor Yattara to include items inherited from his father, the namesake for the institution, and other family members. He, like many other library caretakers, has also acquired materials from outside the family, significantly broadening the scope of its holdings, particularly in the areas of the esoteric sciences. Indeed, this practice continues a long tradition for the circulation of texts amongst scholars and bibliophiles in the communities of northern Mali and even beyond. Such networks of acquisition have extended into Andalusia in the north, Egypt in the East, and Nigeria to the south. It is not uncommon to see a manuscript where a string of former owners’ names have been crossed out and another added. In our work we came across several examples of this reinscription scattered throughout the library’s holdings. 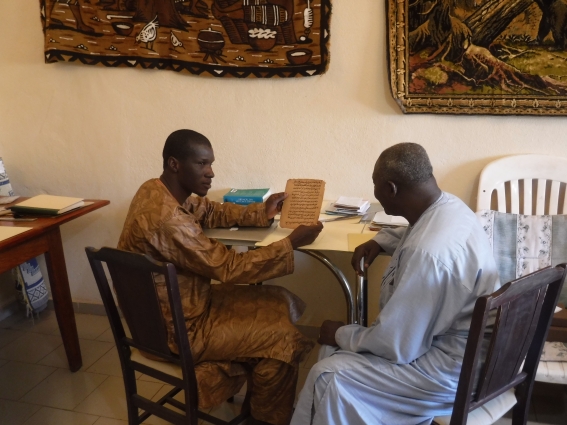 In our daily work, the team inspected each of the manuscripts in the collection in order to document, and in many cases rectify, any issues with their current housing. We would also verify, and update where necessary, the initial data about their contents for the library’s local catalog (number of folios, condition, general subject matter). Through this survey of the holdings allowed we identified roughly a hundred manuscripts for consideration as potential items for digitisation. At this point the library director, in consultation with a local scholar, worked with us to select the fifty we would photograph in order to best represent the collection. This was not an effort to chose the fifty best or seemingly most important of the holdings, rather, our aim has been to demonstrate the range of the materials in terms of subject, condition, style, genre, date, as well as other vectors of their production. Our rationale for such an approach has been to showcase where the collection has its strengths – particularly in materials from the 19th century – such that scholars might see the potential in conducting future work with the collection as a whole or in part. 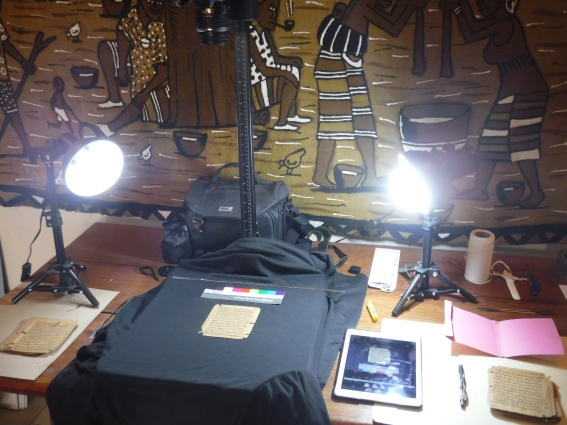 On a personal note, my work with these venerable manuscripts, and the relationship that I came to have with them, reflected, in many ways, how I would experience and engage with the modern city that had become their new residence. It was a mix of the familiar and the strange, the exciting and monotonous. On any given day you might come across a series of folios filled with seemingly indecipherable magic squares with unimaginable powers. Such wonders might be followed on the return drive to the hotel with a glimpse of a man riding a motorbike with a kid (and here I mean a real baby goat) on his shoulders or a live chicken hanging on the handlebars of a mopped, wings flapping, as the driver weaves through the cars. The following day would be filled with page after page of texts on jurisprudence, often in a hand that was less than legible, even if it had not been extensively smudged by water staining and the dirt that could result from several decades of safekeeping as part of a cache of buried manuscripts. Such days might be similarly filled with endless traffic jams to rival Los Angeles or Cairo, motorists occupied with their ubiquitous mobile phones as they endeavor to inch forward. It is all valuable knowledge, whether ethnographic or epigraphic, regardless of its potential to be paradigm shifting or to supply another data point that confirms a well-established trend. My colleagues and I have been humbled by the opportunity to collect that knowledge and to have been entrusted by the Yattara family and the EAP as a conduit for its sharing.

This blog has been written by Dr. Ian Straughn, Brown University. Dr. Straughn is the grant holder for the EAP913 pilot project.

Posted by Endangered Archives at 11:48 AM