Doctoral Research into the Migration and Settlement of Liberated Africans

Each year, the British Library organises Doctoral Open Days, with the aim of helping students explore the Library’s collections. Two years ago, I met Jake Richards at an Asia and Africa focused Open Day. I am absolutely thrilled to share this blog post, the first to be written by a PhD student using EAP material as part of their research.

In April 1839, J. B. Hazely, an official in the Liberated African Department in Freetown, Sierra Leone, requested that his colleague, S. Thorpe, ‘with all possible speed, send up to this Department six able Boys, capable of speaking English, & fitting to be placed on board Her Majesty’s Brig of War Harlequin’. The Harlequin was one of several Royal Navy ships that patrolled the Atlantic to suppress the slave trade. Naval ships intercepted hundreds of slave ships in the nineteenth century, and transferred the embarked slaves to particular ports where they would be declared free from slavery, and then apprenticed for up to fourteen years – a process which labelled them ‘liberated Africans’. The Liberated African Department Letter Books, digitised by the Endangered Archives Programme, contain correspondence between departmental officials, Royal Navy officers, and missionaries who were involved in different stages of this process of ‘liberation’. As Hazely’s letter reveals, the six boys would work to suppress the slave trade from which they or their relatives had recently been rescued.

Sierra Leone handled around half of the approximately 200,000 slaves rescued after Britain abolished the slave trade in 1807 – more than any other location in the nineteenth century. Britain’s colony in Sierra Leone had begun twenty years previously as a site not much larger than Freetown, established as a home for black soldiers and sailors who had fought for Britain during the American War of Independence, plus Maroons from Jamaica and freed slaves from Nova Scotia. After 1807, colonial governors and the Church Missionary Society founded a series of villages outside Freetown to manage the influx of liberated Africans, and appointed managers, such as Thorpe, to run them as part of the Liberated African Department. Many of these villages still bear their English-sounding names: Hastings, Kent, and York. 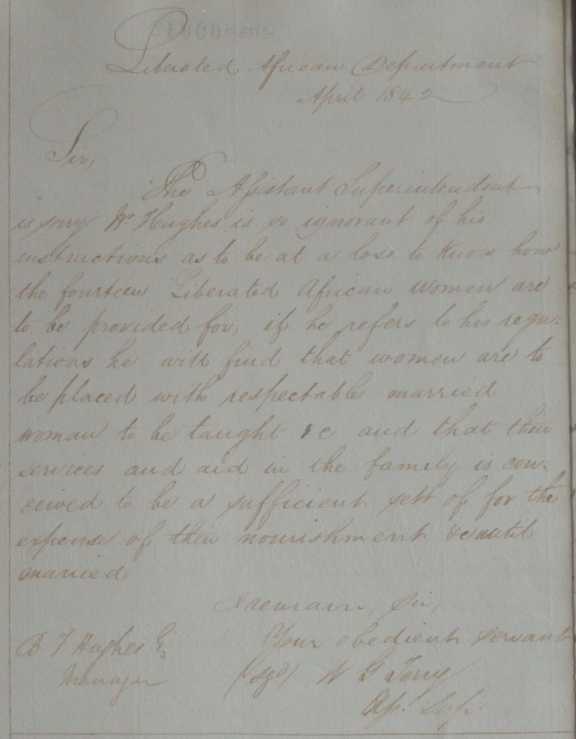 The Letter Books suggest that the managers combined jobs as administrative heads, magistrates, and experimenters in labour patterns – a local social engineer before ‘decentralisation’ became a buzzword. One of the most noticeable patterns of experimentation was a division of work and opportunities according to whether the Department identified a liberated African as male or female. Managers distributed male apprentices to naval ships, to the West India Regiments, and to settle Tombo (or Tumbu) on the southern fringe of the colony. Although girls went to school, some women were married off soon after arrival, including several ‘Eboe’ women who were presented with husbands soon after disembarking from their slave ship at Freetown’s Liberated African Yard in 1838. Sometimes women worked for ‘respectable married women’ to learn domestic skills until they were eligible for marriage, as a letter from April 1842 attests. The Letter Books give only glimpses of the other work women did beyond the oversight of village managers, such as food hawking or market selling. The lack of choice in deciding labour and domestic relationships may seem surprising, but many contemporary workers in Britain had similar constraints on their choices. The Letter Books continually remind their reader that there were many gradations between enslavement and free labour, and that the processes of moving between them were unpredictable and halting.

The EAP is a cherished window into documentation at the frontier of historical research, and I am grateful to the archivists and researchers whose EAP grants made these sources accessible, to Jody Butterworth for telling me about them at the BL’s Doctoral Open Day for the Africa and Asia collections in 2016, and to the staff who ran a wonderfully helpful open day.

Jake Christopher Richards (University of Cambridge) is conducting doctoral research into the migration and settlement of liberated Africans around the South Atlantic, c. 1839 – 1871.

If you are interested in attending this year's Open Day, it is on Monday 22 January 2018.

Posted by Endangered Archives at 8:35 AM