The Manuscripts of Mali

The fabled city of Timbuktu has attracted frequent media attention over the last few years. During the occupation of northern Mali by Al Qaida linked extremists in 2012 the destruction of mausoleums to local Islamic saints in Timbuktu caused an international outcry and resulted in a UNESCO funded rebuilding project after the recapture of the city in 2013. The extremists also burned around 4500 manuscripts from the Ahmed Baba Institute as their last act of defiance before the French and Malian forces re-conquered Timbuktu. Already during the Jihadist occupation many thousands of manuscripts had been transported in secret to Bamako in the now famous rescue operation organised by the Timbuktu librarian Abdel Kader Haidara. This swashbuckling tale has been the subject of two international best-selling novels, The Bad Ass Librarians of Timbuktu (2016) by Joshua Hammer and The Book Smugglers of Timbuktu (2017) by Charlie English, as well as countless articles and documentary films. Timbuktu, ante bellum, was a thriving city of tourism and the centre of over fifty private family libraries which have now been moved to Bamako where the manuscripts are receiving conservation treatment and are being digitised by SAVAMA, an association of Timbuktu libraries led by Abdel Kader Haidara, which has received international funding from the German, Dutch, Luxemburg, Swiss and Norwegian governments as well as the Ford Foundation and many other sources. 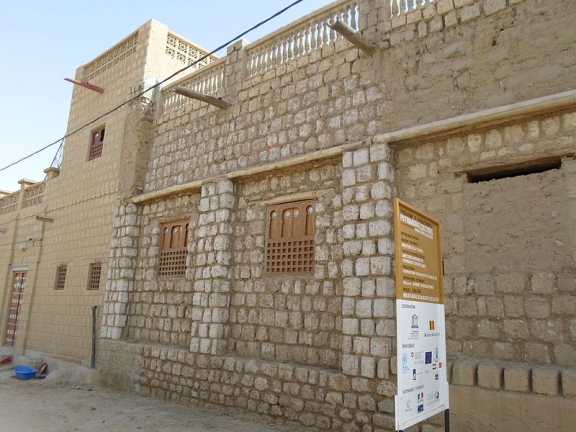 Certain important libraries in Timbuktu declined taking part in the rescue mission to relocate to Bamako. Instead they chose to hide their precious manuscripts in secret desert hiding places in and around Timbuktu: these include the Imam Essayouti, Al Aquib and Al Wangara manuscript libraries, attached in turn to the three ancient mosques of Timbuktu: the Djinguereber (built 1327), the Sankore (built soon after) and Sidi Yahya (1440). Together they compose what was known as the University of Timbuktu. The British Library, through the Endangered Archives Programme and in partnership with the Hill Museum and Manuscript Library in Minnesota, USA, is now undertaking the digitisation of these libraries in situ in Timbuktu, where work is underway in the Imam Essayouti library since October 2017, and will begin in the Al Wangara in April 2018. 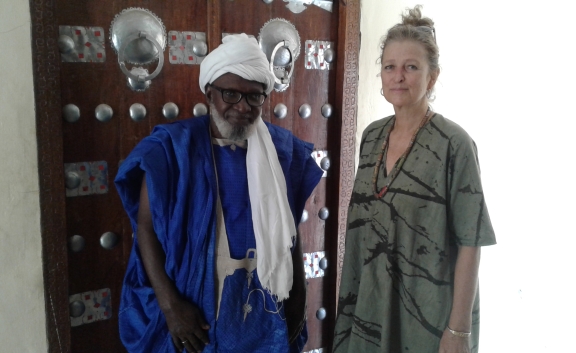 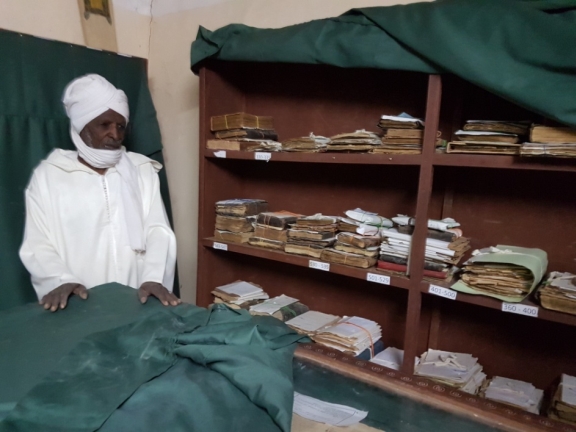 The Imam of Sankore at the Al Aquib Library, Timbuktu 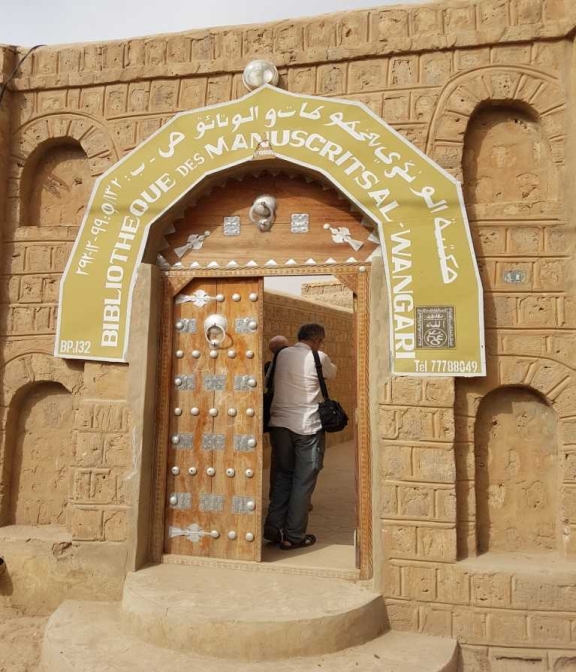 Although the main concentration of Arabic manuscripts in Mali was undoubtedly in Timbuktu due to its position as the most important trading city of the Trans-Saharan trade route since the early Middle Ages, other Malian cities also boast large deposits of ancient Arabic manuscripts: Djenné in particular. It is situated some 500 km south of Timbuktu in the Niger Inland Delta of Central Mali and was also an important city of trade and scholarship and one of the gateways where Islam first penetrated Mali in the 13th century. Djenné is a repository for thousands of manuscripts which have been kept by families for centuries. In 2009, the British Library’s Endangered Archives Programme ran a Pilot Project, which concluded that Djenné’s manuscripts provided a suitable source of material for the mounting of a major two year digitisation project. This was the first in a series of three consecutive major projects, which finally came to an end in October 2017, when in the region of 400,000 images had been achieved from the 8,500 manuscripts which are currently stored in the Djenné Manuscript Library. 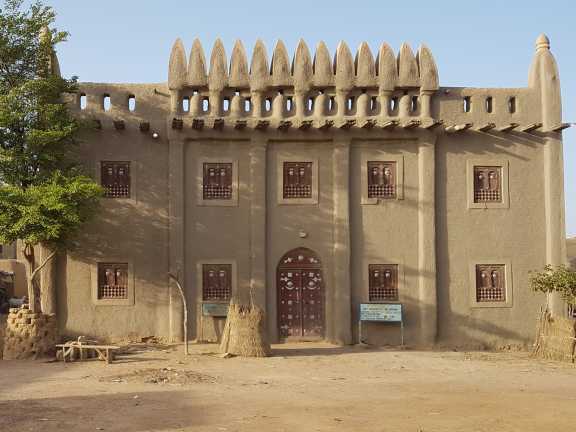 Malian manuscripts deal in the main with traditional Islamic subject matter such as Hadiths (traditional sayings and stories attributed to the Prophet Mohammed), Islamic Jurisprudence of the Malikite School, religious poetry and sermons etc. There are also frequent philosophical expositions, mainly on ethics and logic as well as many manuscripts dealing with the Arabic language and grammar. There is history, correspondence, and astronomy which is normally treated as inseparable from astrology. A large proportion of the manuscripts, particularly in Djenné, fall under the label ‘esoteric’; incantations and magic formulas which purport to tell the future or influence the course of events by the use of phrases from the Qur’an in combination with the manipulation of vegetable matter or animal sacrifices. These sorts of practises are frowned upon by certain factions within Islam and some believe that this may possibly have caused the destruction of the manuscripts in Timbuktu by the fundamentalists who derive their Islamic creed from the Wahhabist school of Saudi Arabia and Qatar.

The involvement of the British Library through the EAP in these projects in Mali continues to be instrumental in safeguarding these manuscripts. In the case of Djenné not only in digital form but also in providing a physically safe environment for the storage of the documents, which had previously been kept in very precarious situations in the family homes, susceptible to the vagaries of the climate where during the rainy season violent rainstorms often cause destruction to the fragile mud buildings, and insects are a continuous hazard. 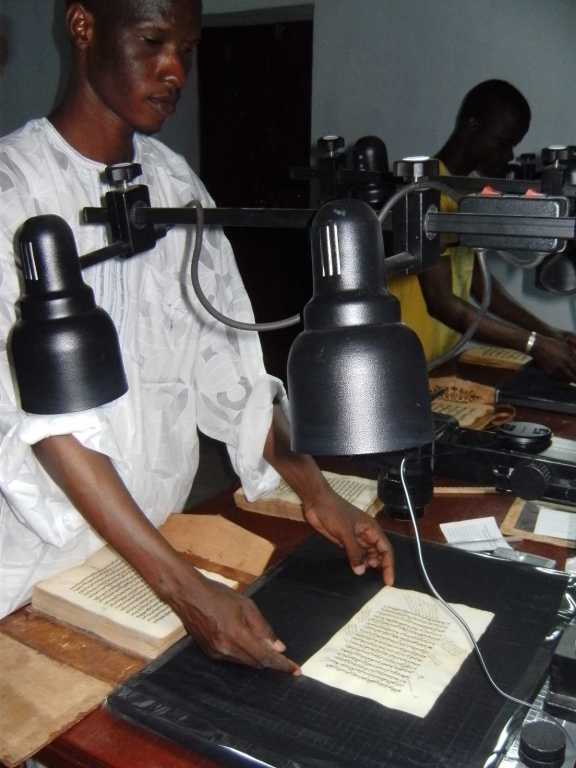 However, the menace for the manuscript collections in both Djenné and Timbuktu lies not only in the threat of physical deterioration; the political situation is very unstable. There exists an uneasy truce in Timbuktu, but Islamic extremists are encamped in the surrounding desert and attacks on the city are frequent despite a very large UN peace keeping force.  Similarly, the escalating security crisis in central Mali is making the future uncertain for the Djenné Manuscript Library. State presence is withdrawing from the area as frequent attacks from local Islamic fundamentalists target state employees at institutions such as gendarme guard posts and schools. The Mission Culturelle, as the representative of the Ministry of Culture is a potential target and by extension the Djenné Manuscript Library. So far neither has been targeted, but the situation is volatile. The fact that the Djenné collection of documents has now been digitised and that copies exists at the British Library and also at the National Archives in Bamako means that although the original copies continue to be kept in troubled central Mali, at least the vast majority of manuscripts have now been saved for scholars in digital form, and the Timbuktu manuscripts from the three famous Timbuktu University Libraries are now also on their way to being digitally preserved for posterity.

From September 2018, the British Library will be showcasing the projects carried out in Djenné in the form of an exhibition to be held along the Second Floor Gallery. There will also be accompanying events related to Mali during the autumn, so do check the Library's What's on page later in the year.