A Football Team from Lesotho

I cannot say that I am much of a football fan. When the World Cup takes place I find my favourite television programmes postponed. Also, my local London pub, which is usually a haven for a quiet evening out with family and friends, is taken over by crowds of supporters watching a match in the corner of the bar and shouting words of encouragement to their much-loved teams.

So, with an initial heavy heart, I started searching the EAP website for material connected to soccer that would be appropriate for a blog post. As always, I got swept away with the archives and for the first time, I feel I may have found my own team to support. I came across a file of correspondence concerning Mabeoana Football Club that was digitised as part of the Matsieng Royal Archives in Lesotho (EAP279). Some of the letters are written in Sotho and so I am unable to read them, but others are in English and they have given me a wonderful impression. 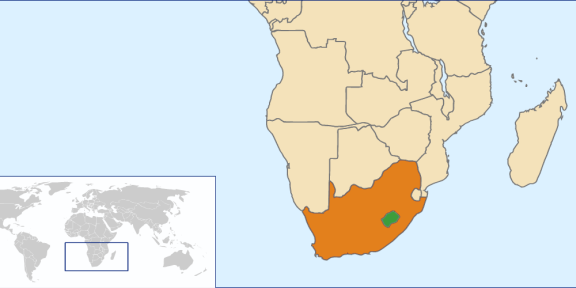 The Club was founded in 1932 but the letters that have been digitised date from 1952-1954. I am assuming the Mabeoana team were made up of talented non-professionals, as indicated by this wonderful letter from the Club Secretary asking for Mr S.C. Pholo to be released from his driving duties so that he could take part in the Sir Sturuk Cup Finals. 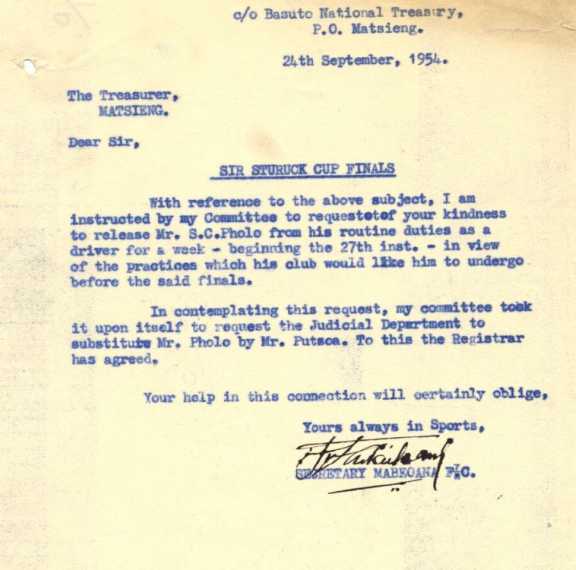 It looks as if the Daamboos Choir had been booked to entertain the spectators during this important match but were unable to perform and had to return their fee. What I desperately wanted to know was whether Mabeoana won the Finals but sadly there is nothing within the archive to indicate whether they became the champions. 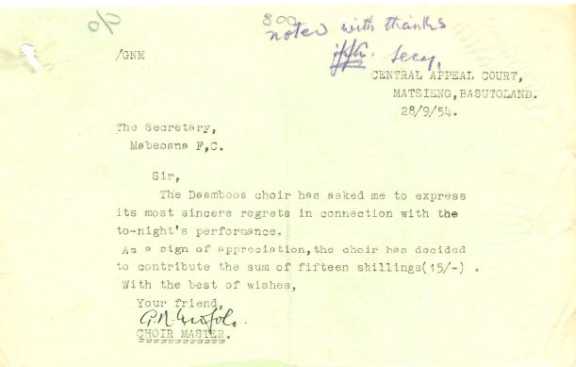 There seem to be a mixture of official matches and friendly games. I love this letter to an unknown team again from the Secretary, saying they wish to have a ‘Hot’ Match – I do hope the challenge was taken up and that it was a close and exciting game, certainly the results for 1954 imply that Mabeoana were a talented group of players and at the top of their game. 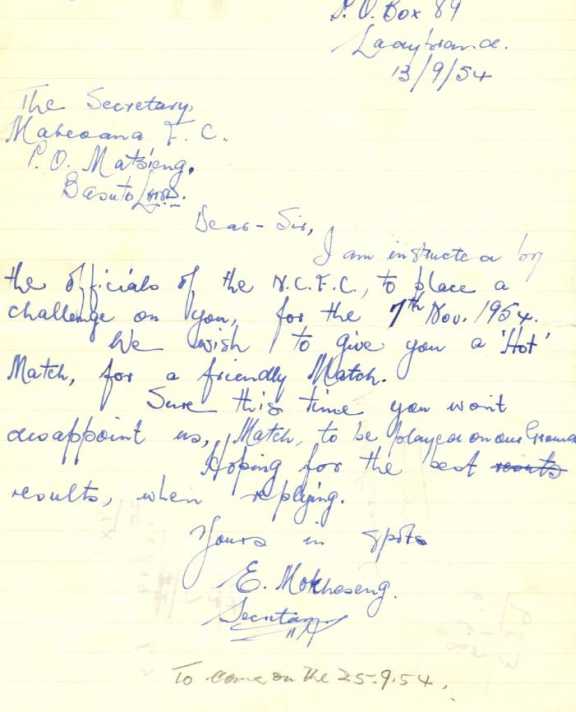 Sadly, having warmed to this team, a quick search on the internet told me that in 2011 they were relegated from the Lesotho Premier League, and I have been unable to find out anything further about them. So, if there is anyone reading this blog who can tell me more about Mabeoana F.C. – I would love to hear from you.

Thanks to one of our blog readers and the power of Twitter we were provided with some further information about this team. The team still play in Matsieng and are currently in the second division in Lesotho. Mabeoana is the name given to the people from Matsieng. The custodian of the team is the Principle Chief of Matsieng, who is currently Seeiso Bereng Seeiso.

We wish them luck for the next season and hope to get news of their promotion in the not too distant future!

Posted by Endangered Archives at 9:49 AM