The British Library: the Place where Vastness and Warmth Meet

We are extremely excited to have Rihana Suliman join the EAP team for a year. Rihana is a Chevening Fellow  and will be promoting the Programme in the Middle East and North Africa. During the coming months, Rihana will share her experiences by writing regular blog posts. Below are her impressions of a very busy first week at the British Library.

Welcome knowledge. Welcome curiosity. Welcome imagination. These are some of the words any passer-by would find at the gates of the British Library. However, it is by stepping inside the Library that one is able to taste and enjoy the truth such phrases hold.

Talking about the highlight of my first week at the British Library would be a difficult task indeed, as every encounter could be considered so whether it was interacting with people and staff or in terms of discovering spaces, reading rooms, facilities, collections and all that the Library offers.

My first day started with a tour in the largest public building constructed in the UK in the 20th century. I was introduced to the Library’s various floors and also to its basements which extend to the depth of 24.5 metres. There I got to see the process of sending a book from the storage to the reader, the Sound Archive which preserves sound recordings from 19th-century cylinders to CDs and DVDs, the British Library’s partnership with Google which aims to digitise up to 40 million pages of printed books, pamphlets and periodical from 1700 to 1870, and thousands of other books, maps and magazines.

The real privilege for me was arriving to the UK in time for the opening of the Library’s photographic exhibition entitled: ‘Beyond Timbuktu: Preserving the Manuscripts of Djenné, Mali’. This is the first EAP display to be held at the British Library and it is a celebration of the four projects the EAP had conducted in Djenné. These projects in the town of Djenné have preserved over 150,000 images and a collection of 8,300 manuscripts making a copy of them available online. Understanding the importance of Djenné, the richness of its collection of manuscripts and the complexity of its socio-political culture in the past and present was provided through a panel discussion held on 1 October that shed light on the ‘Masterpieces of Mali: Djenné and its Manuscripts’. It was fascinating to see how thought provoking the talks were and how people responded with eagerness, wanting to know more by asking questions about this project and other future projects to be carried out by the Endangered Archives Programme. 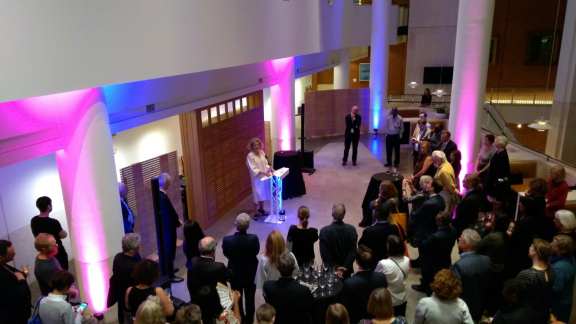 Sophie Sarin, grant holder for the Djenné projects, giving her speech at the private opening

The EAP is one of these programmes which has a magnetic charm – one can’t help but fall in love with it at first sight. I have to admit that this was exactly the case with me. It would be no exaggeration to add that the more I get to know EAP and its future plans, the more I fall in love with it. I am very proud to be part of a programme that has so far supported more than 350 projects in 90 countries worldwide. I can’t help but wonder how this year will unfold especially when the first week with the Digital Scholarship Team has been this exciting and enlightening.

Posted by Endangered Archives at 3:05 PM