In Celebration of Djenné

During the last part of 2018 two identical photographic exhibitions celebrating the involvement of the Endangered Archives Programme with the manuscripts of Djenné, Mali have been mounted. The first of these, named : ‘Beyond Timbuktu, the manuscripts of Djenné’ had its opening on the 27th of September with a glittering private view at the British Library with addresses by Lisbet Rausing, the Trustee and Founder of Arcadia, which funds the Endangered Archives Programme, as well as by H.E. Cat Evans, the British Ambassador to Mali ; Roly Keating, the Chief Executive of the British Library and Sophie Sarin, who has co-ordinated the Djenné Library’s four consecutive EAP projects since 2009. These projects have resulted in a treasure trove of around 400,000 images of the Arabic manuscripts of Djenné, which are now available on-line. 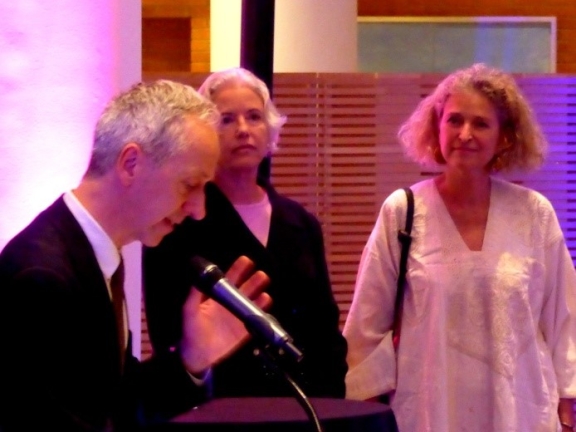 Speeches at the opening in London 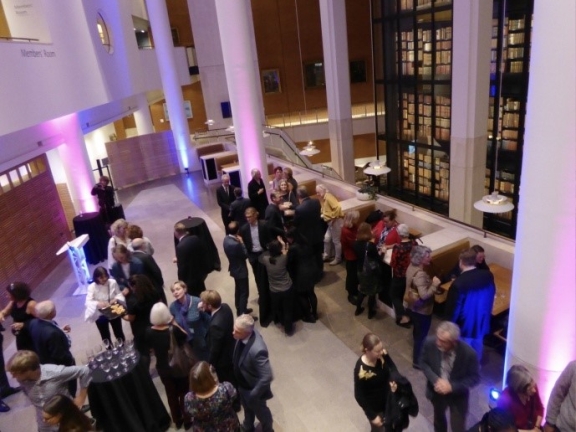 The private view in London

Since it was unfortunately not possible to bring the Djenné team to London, it was decided that the exhibition should be duplicated and shown in Bamako. Djenné itself is now considered too dangerous because of the deteriorating security situation. A hard drive containing the digitised Djenné manuscript images of the first project EAP488 had already been delivered to the Archives Nationales in Bamako in a ceremony in 2013, attended by the then British Ambassador Philip Boyle. The last hard drives containing the EAP projects EAP690 and EAP879 needed to be delivered and at the same time a final ceremony /celebration for the projects seemed a suitable way to end a long and fruitful collaboration . It was therefore decided that the handing over ceremony of these last hard drives should take place at the same time as the opening of the concurrent Djenné photographic exhibition. This took place on the 7th of December.

The photographs are a mixture of images from the manuscripts in the EAP digitised collection and pictures taken by different photographers of the island city of Djenné, which enjoys UNESCO World Heritage status celebrating its monumental mud architecture with its crowning glory the Great Mosque. The pictures were expertly printed and mounted by La Maison Africaine de la Photographie, an institution connected to the Ministry of Culture which has plenty of experience in mounting exhibitions in this country, which is rightly proud of its star-studded photographic heritage featuring names such as Malick Sidibe and Seydou Keita.

An additional attraction to the exhibition display on the morning of the ceremony in Bamako was a 3-D display called a ‘Google experience’, which showed images of Djenné and the library with the aid of cardboard 3-D viewers in combination with smart phones. This feature was supplied courtesy of http://www.4dheritage.com 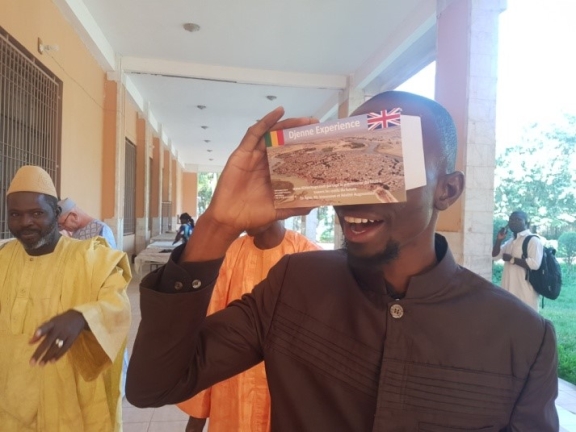 Captivated by a virtual tour of Djenné

The 7th of December was a Friday- this is always a half-day in Bamako as everyone is intent on going to Friday Prayers at the Mosque. The ceremony was therefore scheduled to start early enough with the guests being seated by 9.30, since Malian official events are always very tied to protocol and the longer the list of illustrous guests, the longer the introductions to each of the speeches must become, since protocol demands that every VIP is greeted individually by every person giving a speech. The list of VIPs who would be present kept changing in the 24 hours before the event and at one point it included one ex- President ; the First Lady of Mali ; three ministers as well as four ambassadors. Therefore the Archives Nationales underwent a hasty and much- needed clean-up and face-lift. 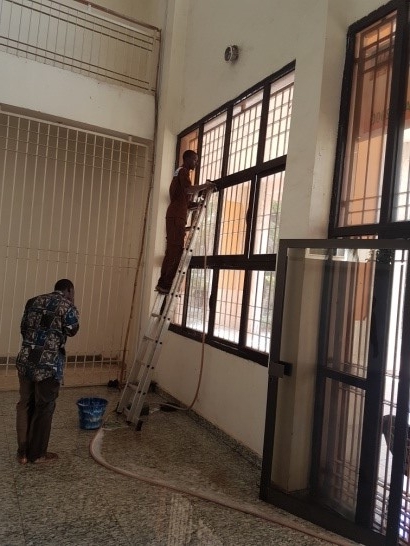 Preparations for the National Archives ceremony in Bamako 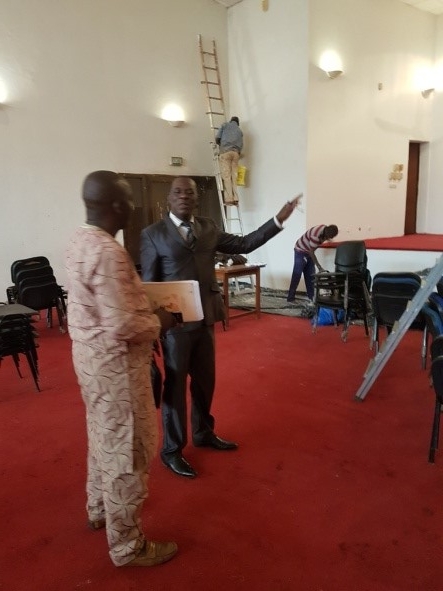 However, the list of VIP’s had eventually shrunk to a more manageable size comprising one minister (Madame Sanogo, Secretaire Generale du Gouvernement) who presided ; 3 ambassadors (South Africa, Sweden and UK) and the Honorary Malian consul to the UK Mark Saade who had flown out especially for the event.

A short film in French had been produced on the evening of the British Library’s private view, which included a greeting to the people of Djenné and Library team by Sophie Sarin and Kolado Landoure, from a well known Djenné family greeting his townsmen in Saurai ; addresses by Mark Saade and by Dr Marion Wallace, Lead Curator of African collections at the British Library. This film was shown during Sophie Sarin’s short address. 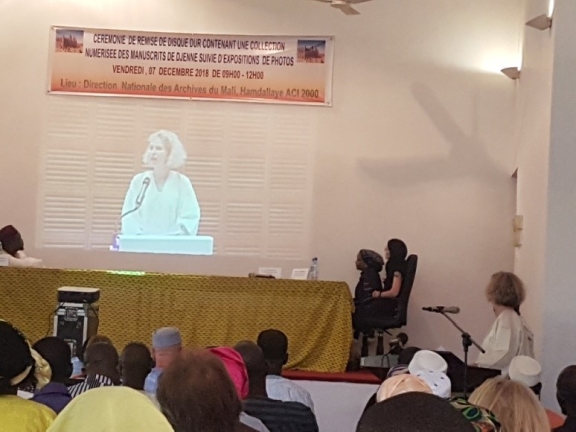 Showing the film at the ceremony, Bamako

The British ambassador Cat Evans once more graced the proceedings and addressed the assembly as did Hasseye Traore, the President of the Djenné Manuscript Library who raised the important matter of the future funding of the Library since the projects have now come to an end. He spoke in Bambara with interpretation from the MC Mamadou Samake, who worked for many years on the Djenné Projects. Finally the Minister Madame Sanogo brought things to a close, and people were about to go for refreshments and to view the exhibition when one last dramatic incident threatened to derail the entire ceremony.

The Djenné projects have, from the very beginning, had a small but powerful group of detractors in Djenné, at first led by the late Imam Korobara, and lately by the new traditional village chief of Djenné. The latter has done all in his power to get the EAP projects closed and with them the library itself, including going to see the Minister of Culture and UNESCO to complain and to insinuate that the British Library’s EAP projects are illegal. Having investigated the situation, the Minister of Culture then sent a letter to the village chief, which was leaked to anyone who was somehow concerned in the affair. This letter stated that the digitisation of manuscripts was a legal act as long as the manuscript owners agreed to it and that the Ministry of Culture warmly encouraged the digitisation of the Djenné manuscript. Everyone now thought this problem had finally disappeared.

However, on the morning of the ceremony, one of the first guests to arrive was the Djenné village chief. He took his seat and bided his time. After Madame Sanogo’s final speech wrapping up the procedings he stood up and indicated that he wanted to say something. Of course he was given the opportunity to speak. Mamadou Samake the MC went over with the microphone and the village chief started to voice his by now well-known discontent in Bambara. After a short while, and before Samake had time to interpret, Madame Sanogo whispered something in the ear of her assistant who went over to Samake and passed on the message. What followed was a remarkably graceful manoevre when Samake politely said thank you to the village chief, removed the microphone and ‘interpreted’ the following "For Your Excellences the ambassadors who may not speak Bambara, The village chief is expressing how very thrilled he is to be here at this ceremony and he is congratualting the Djenné Manuscript Library on the wonderful work they have done !"

The assembled guest then went to look at the exhibition and enjoy their refreshments, and the ceremony and celebration of Djenné came to a happy conclusion. 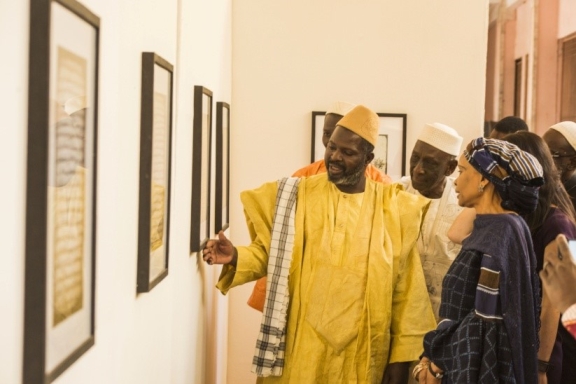 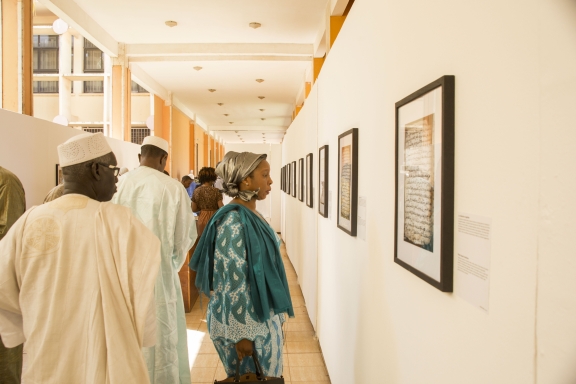 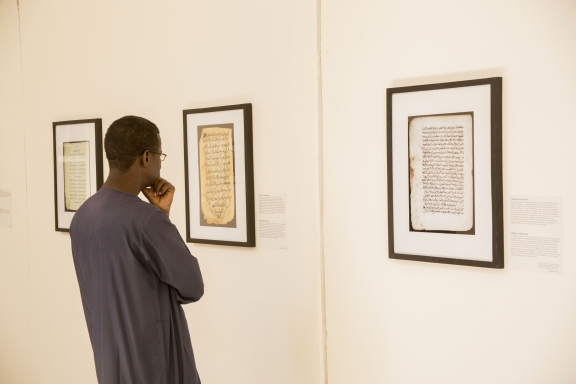 Blog written by Sophie Sarin, grant holder for the projects in Djenné

Posted by Endangered Archives at 8:59 AM