This initiative to locate and survey endangered archives in Kerala was awarded as a pilot project grant by the Endangered Archive Programme in May 2019. Besides surveying and contacting public and private archive owners, we intend to sample approximately 200 pages of hand-written manuscripts and rare lithographs. Some of the manuscripts constitute the written, visual facet of a living tradition of performance for religious and devotional practices. We therefore intend to sample also video and audio records of performances according to the Malabar style. Many of the texts constitute, besides devotional poetry, a rich intellectual legacy of jurisprudence, historiography, and various sciences such as medicine and even architecture. Even at this initial stage all of us involved feel as if standing on the threshold of a hidden garden full of treasures. We have already found textual material of great significance for early modern Malabar history to take us beyond the colonial archives that have been, so far, the primarily source for Kerala and Malabar historiography. We expect to find material that will reorient Malabar Māppiḷa literature and culture in the broader framework of the Arabic Cosmopolis, a term coined by Ronit Ricci in her seminal work, Islam Translated: Literature, Conversion, and the Arabic Cosmopolis in South and Southeast Asia (Ronit Ricci was grant holder for EAP609).

The history of Malabar and the Malayalam-speaking region is the history of contacts and networks across Asia from Arabia, the Persian Gulf, and East Africa to Southeast Asia. Pre-modern Malabar–the southwestern coastline of India including modern Kerala and Karnataka–was a central maritime junction between the Arabian Sea and the Indian Ocean for several centuries. Semitic and Indic religions interacted, enriching each other with various types of knowledge and cross-cultural exchanges resulting in the ethnic, cultural, and religious diversity that is typical of the coastal communities across the Indian Ocean Rim. The contacts between Arabic and Malayalam are documented since the twelfth century in inscriptions and texts related to Indian Ocean trade. Some examples are Arabic inscriptions found on the West Coast of India commemorating the establishment of mosques by Muslim seafarers from as early as the twelfth century.

Our survey started in the area of Madayi, near Mount Hili (Ezhimala) that was the signifier of land for seafarers over history. Madayi is the site of a twelfth-century mosque, one of the earliest mosques in the region (the medieval structure was demolished in the 1940s giving way to a modern construction). We visited the home of Sayed Ali Ba-Alawi for surveying his impressive collection of manuscripts and rare lithographs in anticipation of a major digitization project in the future. We plan to return in late December for sampling digital copies of a small and beautifully written Burdah text, a hand-written Qur’an, and a majmūʿa manuscript that includes an extraordinary maulid composition named after Taj al-Dīn al-Hindī al-Malabārī, the famous Malayali king believed to have converted to Islam during the time of the Prophet. The story of the conversion is told in detail in the Arabic text called Qiṣṣat Shakarvatī Farmāz (1580 TAQ) and is retold in Malayalam in the Kēralōlpatti (ca. 1700, probably based on earlier oral traditions), in Portuguese in the Notisias dos Judeos de Cochim (1686), and in Syriac documents (1721 and 1871) translated by A. Mingana in 1926 (The Early Spread of Christianity in Kerala). Clearly, the archive faithfully kept by Sayed Ali Ba-Alawi in Mattool might produce textual material of significance for a wide variety of communities in Malabar and beyond. 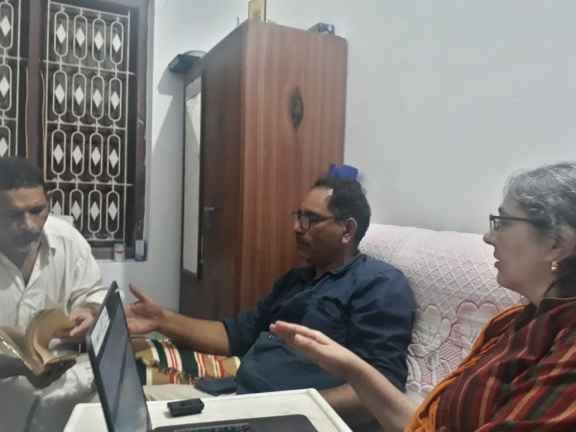 So far, the brief survey at Sayed Ali Ba-Alawi’s archive focused on Arabic hand-written manuscripts and lithographs. Among the texts surveyed so far are fiqh (law), naḥw (grammar), qiṣṣa (story) and tārīkh (history), and qaṣīda (poetry or kavita). Some manuscripts are surprisingly broad in their regional and transregional affiliation, such as an “imitation” (takhmīs) poem composed by Abū Bakr al-Baghdādī (d. 1264) and “imitated” by Ṣadaqallāh al-Qāhirī of Kayalpaṭṭaṇam (Tamil Nadu) in 1885. There are also several majmūʿas (collections) with commentaries on Islamic literature and devotional poetry. As we were surveying the manuscripts, conversations ensued on interesting topics in relation to texts from the story of the late Sufi neighbor who mastered a jinn, to the history of the Araykkal rulers, to the medicinal expertise of Musa Musaliyār, the previous owner of one of the manuscripts, in curing mental illnesses.

Meanwhile, the news about the pilot project travelled far and wide and we were contacted by several local scholars interested in collaborating on surveying and locating more Arabic and Arabic Malayalam manuscript archives–private and public–around Calicut. By the time we complete the initial survey and the digitisation of a few selected texts, we hope to have more archive owners included in an area project, as well as team members, as clearly there is a lot of work on surveying, digitising, and installing preservation equipment in each archive. We thus started negotiating further surveys with C H Mappila Heritage Library in Calicut, with the team headed by Abdurahman Mangad, and with Dr Ajmal Mueen, whose family traces their lineage to the famous Makhdums of Ponnani. 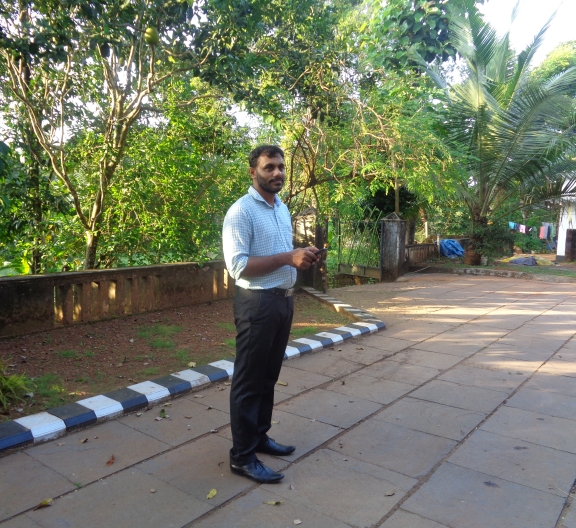 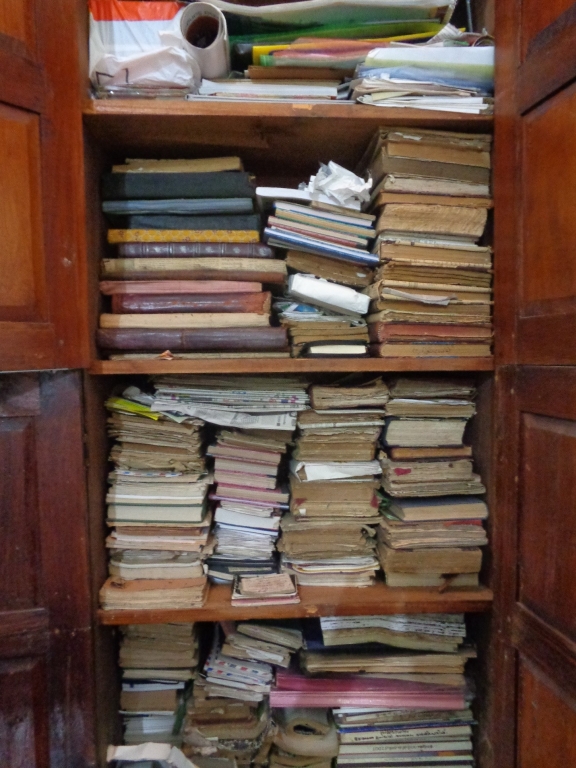 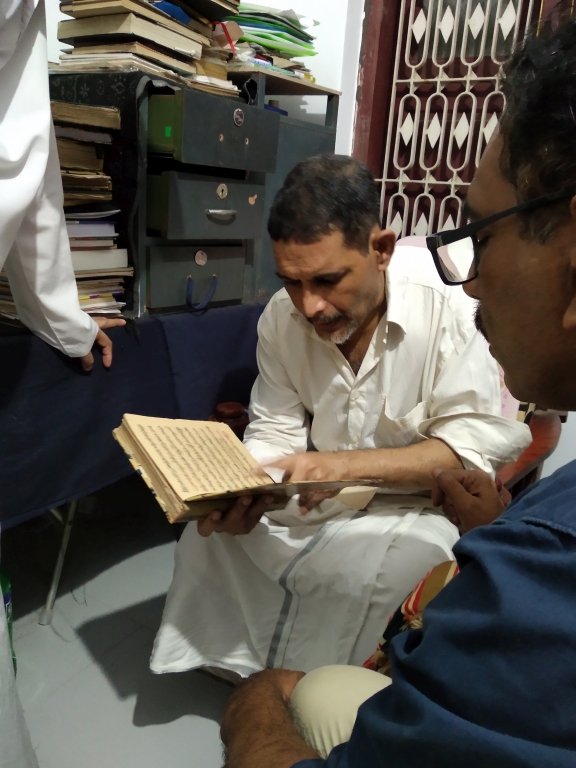 Currently our team consists of Mr Sayed Ali Ba-Alawi, Mr Abdullah Anchillath, Dr Dinesan Vadakkiniyil, Mr Dileepan Kunhimangalam, and Mr Yusuf Ali for the survey in Mattool and Madayi, and Prof Shamshad Hussain K. T. and Dr Saeko Yazaki in Kondotty and Parappanangady, where we plan to video record performance of Arabic Malayalam poems and recitations of Qur’an according to the Malabari style. Mr Shiju Alex will join us for the digitisation phase of the project during the third week of December in Kondotty. Shiju, an expert on digitisation of old and rare printed books in Malayalam (see here), will guide us in the delicate art of digitization. We plan to digitise 200 pages at least during those days for evaluating the volume of the work for a major (or area) project. Finally, there is also a “shadow” team member, Dr Ines Weinrich, who advises on the Arabic manuscripts and their significance from afar, in Germany, where she is currently working on a project on maulid literature over the ages and across regions, including Kerala. 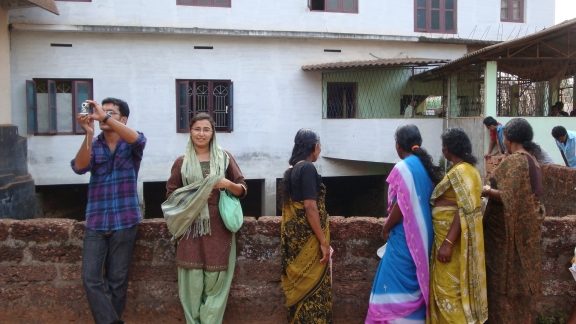 Posted by Endangered Archives at 2:10 PM