Beyond Digitisation: Engaging the Community Around The Barbados Mercury

While digitisation of the Barbados Mercury (EAP1086) was completed in December 2018, it was not an endpoint. It allowed the Barbados Archives to initiate a series of workshops and initiatives aiming to involve the public, and promote the study and mining of the newspaper for further research.

Covering the years from 1783 to 1848, the Mercury is an important primary source for understanding life in a slave-holding British colony. It covers every aspect of life in Barbados during these decades. Although it reflects the worldview of the (white) planter and merchant class, reading the newspaper between the lines and against the grain allows us to get glimpses of the dystopian reality on the island.

Considering that several sources covering the 18th and 19th centuries are not readily accessible, either because they are fragile, or because they lack finding aids, or simply because they have been destroyed or lost, the information contained in Mercury can help us reconstruct many aspects of the history of that period: economic, military, social and cultural, gender, maritime, as well as geography and material culture.

One of the most important set of information is the “runaway slaves” ads appearing frequently in Mercury’s pages. They are important because they offer descriptive information about enslaved individuals for whom usually there is very little in the archives. Ads contain a variety of identifying information, such as names, age, appearance, skin colour, clothes, skills, accent, any distinguishing features, including “marks of their country” or signs that are obviously a result of violence (e.g., missing limbs, scars). More importantly, these ads offer information about relatives and friends that can allow us to reconstruct networks of the enslaved.

In March 2019, a new collaboration between the Barbados Archives and the Early Caribbean Digital Archive resulted in giving start to the “Barbados Runaway Slaves Digital Collection,” an initiative that as a first step aims to bring together all the “runaway slaves” ads in the newspaper and their transcriptions. The Early Caribbean Digital Archive, based at Northeastern University in Boston, aims to make accessible material related to black, enslaved and indigenous people of the Caribbean, and use the digital archive as a site of revision and for exploring ways to decolonise the archive.  The collaboration was officially initiated through a series of workshops and events in May 2019. 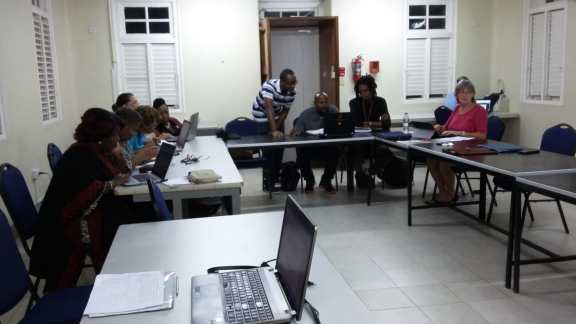 These inaugural workshops were followed by monthly workshops during the fall and winter of 2019. The format of the workshops consisted of an introduction to the Mercury and its digitisation, and the aims of the workshop; overview of the Endangered Archives Programme portal and instructions about how to access and navigate the interface; instructions about doing the transcriptions and saving the documents; time for participants to do the transcriptions either alone or in a group; and finally a group discussion where people could present something interesting they had come upon in the ads they were transcribing, or any other related topic.

Workshops were led by Amalia S. Levi, archivist and project leader for EAP1086, Nicholas Mayers, genealogical researcher, and Dr. Tara Inniss, lecturer at the History Department at the University of West Indies, Cave Hill campus. Workshops were held in the evening to facilitate participation by all age levels. We arranged two of the workshops to fit two courses of Dr. Inniss, so that students in history and heritage studies at UWI were able to attend the workshops.

It was moving to see people interact with the digitised copies of the archival material during the workshops, especially as they realised that it was a source of rich information for understanding the Barbadian past, particularly in terms of genealogical research. This is important because many people are not aware of the many ways their enslaved ancestors resisted slavery to seek freedom. Discussions at the end of the workshops were lively. Participants wanted to share the many—often dreadful—human stories contained in the ads and in the pages of the newspaper. Discussions also allowed people to speak about a past that is often too painful to deal with. 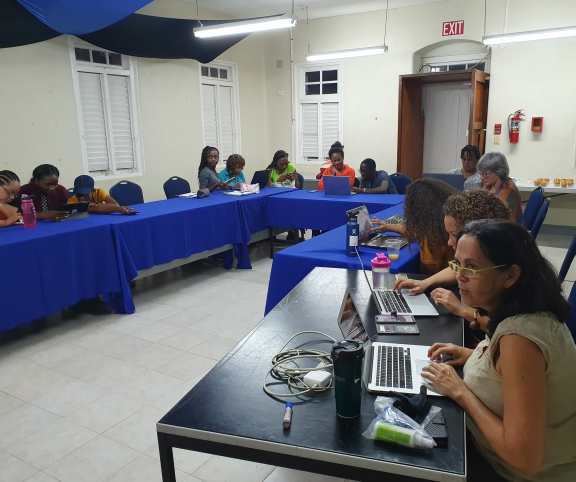 As workshops showed, engaging the public through consistent involvement creates community, and incentivises people to work together to research their history. We are committed to continue engaging the public in this work through regular monthly meetings. At this stage, we were interested in transcriptions, while at a later stage we hope to enrich these human stories with contextual information, and possibly construct a database out of them. We would also like to engage the public in more creative ways of interacting with the ads (for example, writing short stories, sketching a portrait or an artwork and other creative ways).

Posted by Endangered Archives at 3:34 PM