Buddhism on the ground 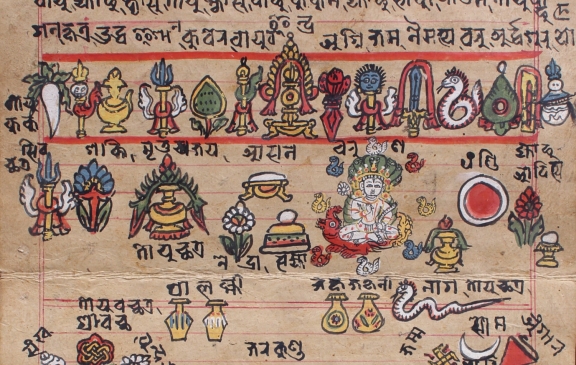 A manuscript in Sanskrit and Newari, showing how to set up an altar. EAP790/1/1

A European scholar of Buddhism, Edward Conze, once said of Buddhist monks that "they are the only Buddhists in the true sense of the word." He went on to say that life outside of the monastery was "incompatible with the higher levels of the spiritual life." This prejudice might be less common these days, but it has influenced generations of scholarship, and limited the kinds of Buddhism that scholars have studied.

Along with thinking that monks are the only true representatives of Buddhism, there has been a tendency to see the ethical and philosophical teachings of the Buddha as "pure" Buddhism, and everything else as falling away from this ideal. So rituals, chanting, storytelling, the making of amulets and casting of spells, have often been neglected in the study of Buddhism.

This attitude has started to change in recent years, but where are we to look for a different story of Buddhism? I would suggest that some of the best resources are projects that have been funded by the Endangered Archives Programme. For example, over the last seven years, the scholar Shanker Thapa has been digitising and cataloguing the personal manuscript collections of Nepalese tantric practitioners known as Vajracharyas.

The Vajracharyas are family lineages, who pass down traditions of Buddhist tantric empowerment and meditation, and services to the local community, such as rituals for protection and prosperity. The image above is from a manuscript belong to Mr Gyankar Vajracharya, who lives in Bhaktapur in the Kathmandu Valley. It shows how to set up an altar for a ritual. Another page from the same manuscript shows the nagas, serpent spirits who live in river and lakes, and are responsible for rainfall. Buddhists have provided the service of making rain to their local communities for centuries. 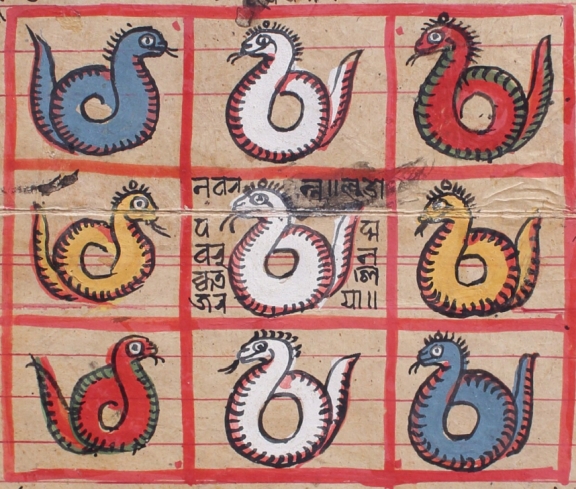 This manuscript, along with the others in Gyankar Vajracharya's collection, which he generously allowed to be digitised, help us to understand the repetoire of a Buddhist ritual specialist in the Kathmandu Valley.

Another EAP project has worked with a very different group of Buddhist ritual specialists, in the Pin Valley in India, some 1000 km northwest of Kathmandu. Between 2012 and 2015 the documentary photographer Patrick Sutherland worked with these ritual specialists, called Buchen, to document their practices, their books, and the other material culture of their profession. The Buchen offer rituals for healing, protection and exorcism, and also teach Buddhism to villagers through story, music and dance. 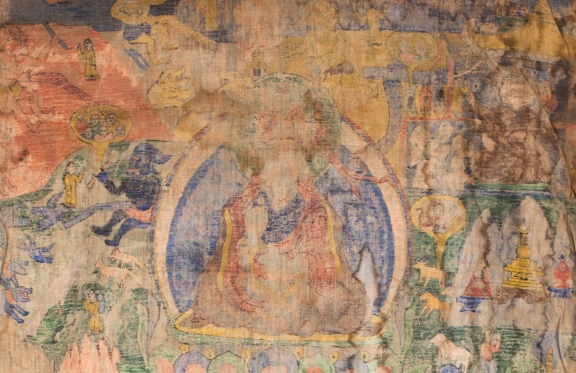 Thangka of the life story of Padmasambhava EAP749/2/2/2

One of the Buchen is Meme Chettan Dorje. He worked with Sutherland to document his whole collection of manuscripts, paintings, and ritual implements. As  storytellers, the Buchen use the biographies of Buddhist heroes and saints to impart religious messages to their audience.

The Buchen's storytelling is based on Tibet's rich literary tradition. This 19th-century manuscript contains one of several version of Padmasambhava's life story. The worn state of the manuscript, including the repair written with a modern pen, clearly shows that all of Meme Chettan Dorje's objects are part of a living tradition, made to be used.

A manuscript containing the life story of Padmasambhava. EAP749/2/1/1

In traditional collections, these three objects - painting, implement and manuscript - might well end up in three different institutions, with the connections between them almost entirely erased. This collection is different because it comes out of working directly with representatives of the living tradition. Both of these two EAP collections show how it is possible to document a tradition in a way that is more true to those who practice it, whether as an insider or an outsider to the tradition itself. Whatever Edward Conze once said, there are many kinds of Buddhism and many ways of being a Buddhist.

Posted by Endangered Archives at 9:00 AM