During the current crisis many of us are confined within the four walls of our homes. To pass the time, I started to browse my bookshelf to see whether I had any publications relevant to EAP collections online.

My colleagues, Graham Jevon and Robert Miles, were in the process of working on a crowdsourcing project to ask people to help identify early photographs from Southern Siberia. One book caught my eye and I began flipping through its pages.

I came across a description from the 1850s of what it was like to be an explorer in Siberia and (although it probably depicts an experience further north than the photographs taken as part of EAP016) I was transported from my tiny flat in London to this vast landscape.

ŌĆ£Winter, with all its blizzards, accompanied by unrelieved dampness, and at the same time unrelieved deep cold (a most unfavourable combination), lasts nine months. Then come two and a  half months of just dampness, like a bath, with thick marshy emanations; in the air there is ubiquitous fog of minute blood-thirsty insects, for such are midges and gnats there. Furthermore, in summer the sun does not set, which is very picturesque to see described, but is extremely tedious to experience in fact. Average temperature for the year is -10┬░C, and it is below -37┬░C in December and January. In winter it is cold, damp and gloomy, and the sun does not rise.ŌĆØ1 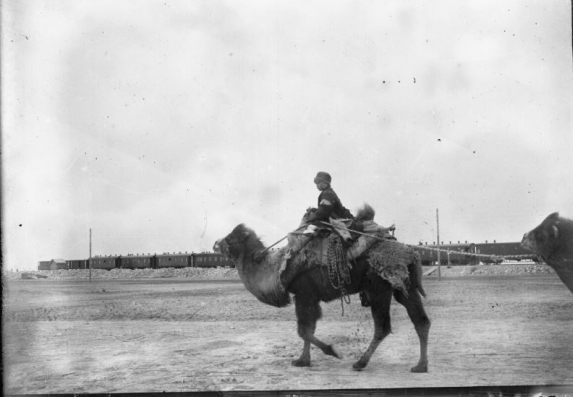 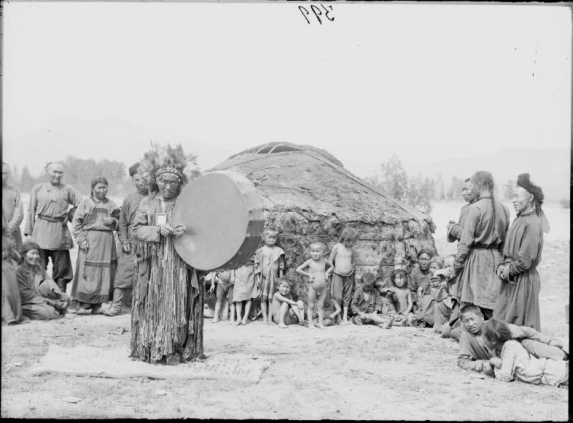 Of course, I didnŌĆÖt have to just glance along my bookshelves to find relevant material. Everything related with EAP is open access and this includes the publication From Dust to Digital: Ten Years of the Endangered Archives Programme2. Chapter 15 is co-written by the EAP016 project holders -David Anderson, Mikhail Batashev and Craig Campbell and focusses on one of the photographers included in their project, Ivan Ivanovich Baluev - a staff photographer based at the Krasnoyarsk Territory Regional Museum. 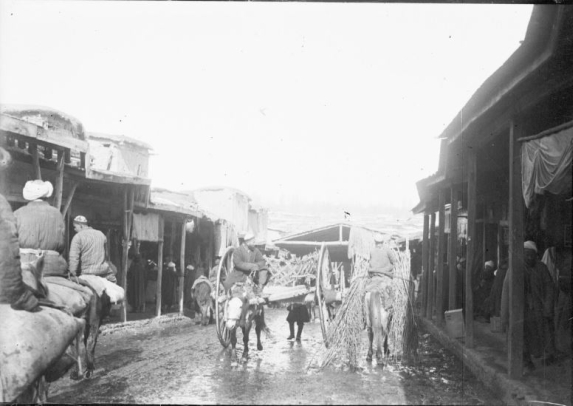 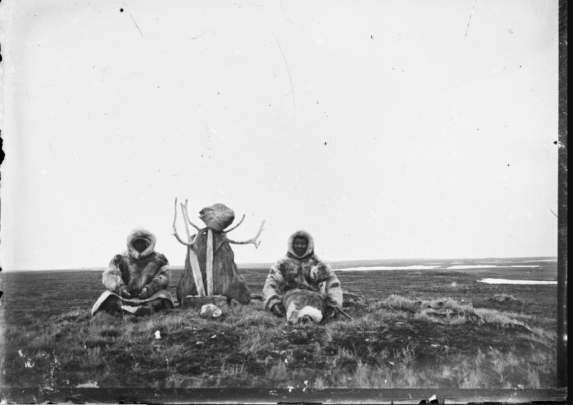 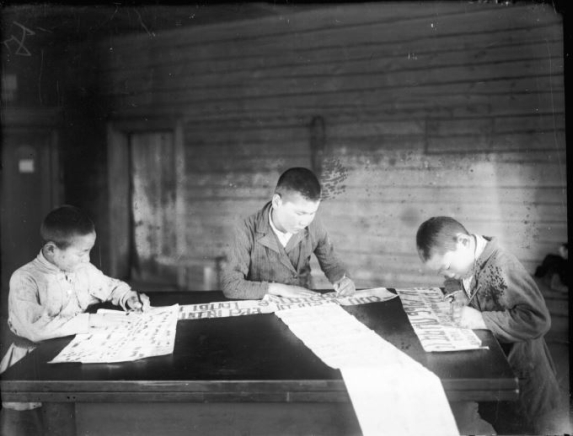 As I was reading, it dawned on me just how impressive Baluev and other explorers were to capture life in Siberia towards the end of the nineteenth and beginning of the twentieth centuries, when they only had the option of using (presumably dry collodion) glass plate negatives ŌĆō and the resulting images are so beautiful. The five collections of photographs, that constitute EAP016, show the day-to-day lives of indigenous peoples of the Siberian Arctic and Subarctic and having seen the examples in this blog, I am sure you will agree they are captivating. 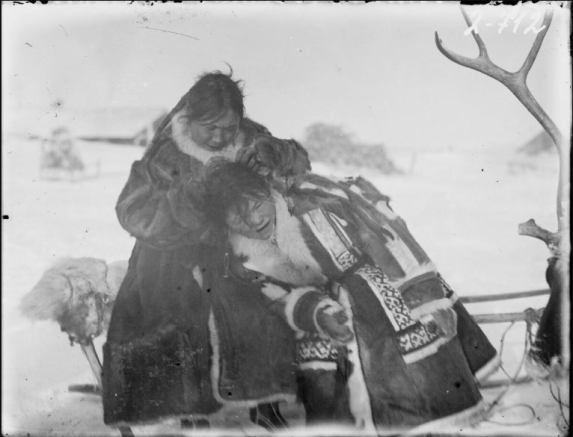 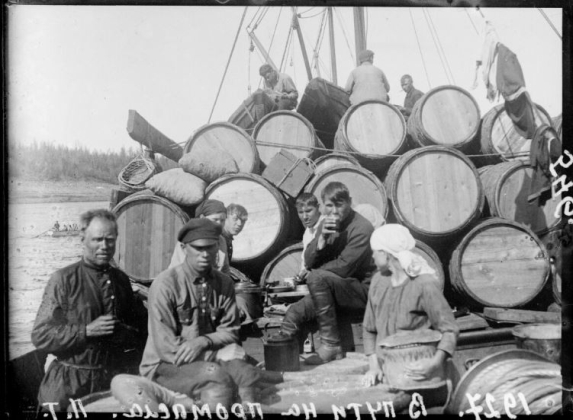 As this is one of our earliest projects, we did not ask for detailed catalogue entries as we would now. These wonderful photographs do not have individual descriptions and as a result, they are not fully discoverable on our website. 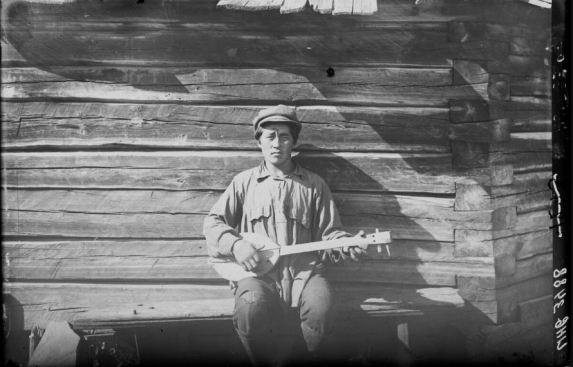 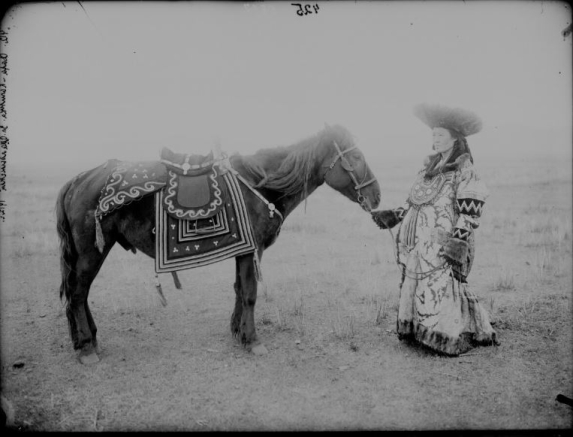 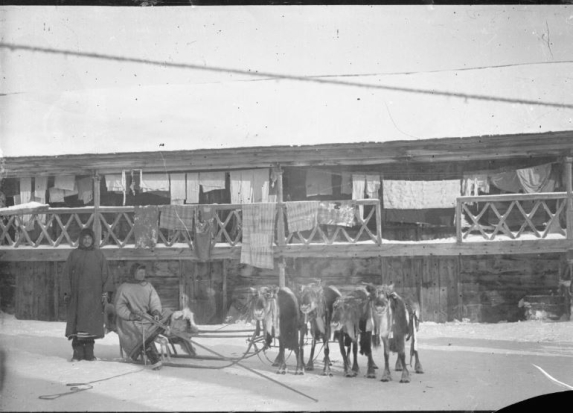 If you would also like to be transported from your current surroundings to the open landscape of Siberia, you can also help us identify what can be seen in each photograph at the same time. If you would like to take part, please click on this link and follow the instructions. 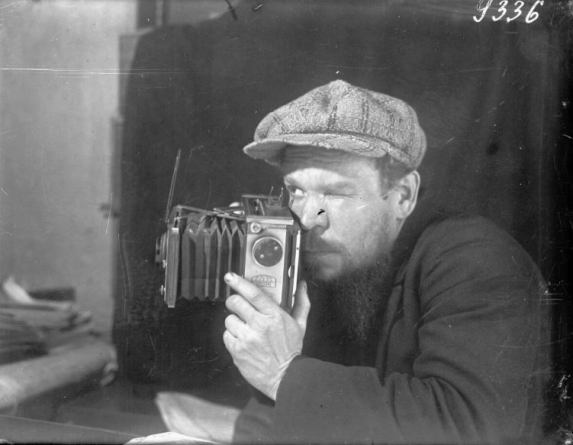 Posted by Endangered Archives at 10:27 AM

In this post, Mobeen Hussain, Doctoral Candidate at the Faculty of History, University of Cambridge, tells us how she has used digitised Urdu newspapers and periodicals in her research.

In the summer of 2018, I travelled to Lahore to undertake research in various Pakistani archives including the Pakistani Research Society at the University of Panjab and the Punjab State Archives. Prior to my visit, I had spoken to various researchers about navigating archives in Punjab. One private library, the Abdul Majeed Khokhar Yadgar Library, was suggested to me and I was greatly looking forward to visiting. The Library, named as such to commemorate the collectorŌĆÖs father, is the personal collection of Mr. Zia Ullah Khokhar based in Gujranwala, a city about an hour and half away from Lahore. This Library consists of rare Urdu books, journals and periodical literature including preserved runs of women and childrenŌĆÖs magazines collected diligently by the Khokhar and his father who had subscribed to several newspapers and magazines in late colonial period. Unfortunately, I was unable to visit this archive in person during my trip due to the poor health of the collector. However, the British LibraryŌĆÖs Engendered Archive Programme (EAP) has digitised some material from this very Library, part of which is pertinent to my area of research. 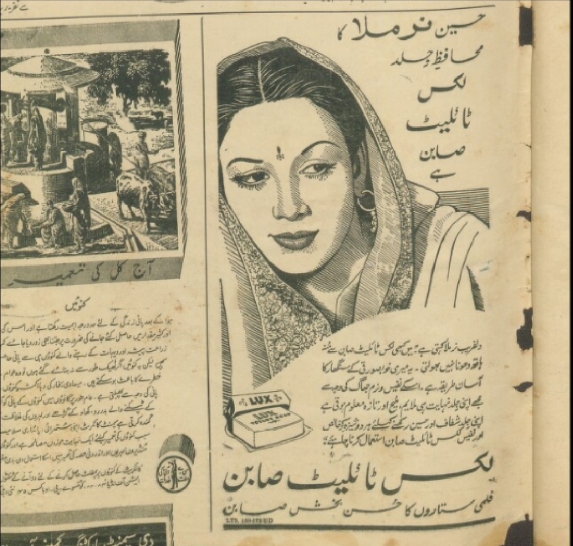 My PhD project examines the intersections of racial politics, gender and beauty in late colonial and immediate post-independence India and Pakistan (c.1900-1950), specifically focusing on colourism and skin-lightening within discourses of hygiene, health and beautification. My source base consists of an eclectic mix of printed literature including periodicals, newspapers and instructional literature. Urdu magazines, such as Tahzib-i Nisvan (EAP566/2/1), as well as other literature held at the Khokar Memorial Library (EAP566/2) enabled me to collect a rich host of visual and textual ephemera. For instance, part of my thesis involves undertaking a survey of personal commodity advertising in various regional newspapers and magazines across early twentieth century IndiaŌĆō commodities including soaps, creams, hair oils, powders, scents and domestic hygiene products. The collections digitised through EAP inform this survey by providing extensive examples of advertising. Other useful sources are the Amrita Bazaar Patrika newspaper (EAP262/1/1), a Calcutta based Hindi and English-language newspaper and Avaz, a fortnightly journal published by All India Radio (EAP566/1/14). Surveying advertising and marketing strategies in popular print mediums allows researchers to trace the evolution of particular products into Indian consumer markets, map the potentialities of consumer behaviours, and suggest how emerging middle-class subjects were fashioning themselves within conflicting urban modernities. 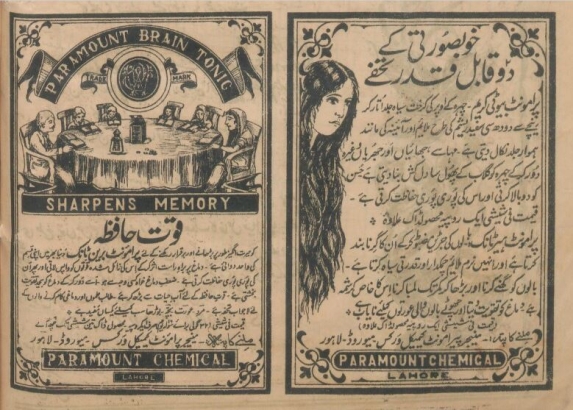 My thesis also looks at the role of aesthetic markers, skin colour and expressions of colourism in the burgeoning medium of matrimonial adverts. Matrimonial adverts were initially placed in caste association journals and newspapers and, by the 1920s, matrimonial columns were a consistent feature in dailies like Amrita Bazar Patrika as well as in other regional Indian newspapers. Matrimonial adverts also periodically appeared in womenŌĆÖs magazines such as Delhi-based Ismat (EAP566/1/2), commonly under headings such as ŌĆ£Rishta ZarooratŌĆØ, translating as match required.  Lastly, my thesis also examines contemporary debates about domestic and personal self-fashioning. The Urdu-language womenŌĆÖs magazines available via EAP, such as Ismat, Tahzib-i-Niswan, and Saheli (EAP566/5/4), allow for insights into Muslim womenŌĆÖs voices in North India which supplement my research on other womenŌĆÖs magazines such as the Bengali-language Bangalakshmi and The Indian LadiesŌĆÖ Magazine, an English-language monthly published in Madras. In Ismat magazine, for instance, columns on domestic health and hygiene practices demonstrate the ruptures between reformist western and indigenous interlocutors of health and how women navigated these knowledge forms in their quotidian practices.

Not only has the Programme supplemented physical archival visits, I am also able ŌĆ£revisitŌĆØ the digital archive; we have all made archival errors in note-taking, wish we could have taken a better photograph and have that one source we would like to go back to checkŌĆō these virtual visits have been invaluable. There are definite merits of physically visiting an archiveŌĆō the spontaneity of searching through documents, the materiality of the archive and the partially-digitisation practices which can obscure oneŌĆÖs phenomenological reading of an archive. Indeed, much can also be learned from engaging with the specialist knowledge of local archivists. However, like my experience in Pakistan, sometimes physical visits are not possible either due to archival difficulties or researcher restrictions. Physical travel is often a racialised, class and health-based privilege. Many researchers are at the mercy of visas and pernicious border controls and are dependent on extensive financial resources and healthy and able bodies. Undoubtedly, these issues disproportionately affect BAME researchers, those from poorly funded universities who have limited access to research grants, and those who may not have a pool of resources to tap into discrete from university infrastructures. Having access to digitised archives, though by no means an equaliser, does allow people to access materials for research that may not have been possible for previous generations. Indeed, during the current pandemic of Covid-19, the convenience and necessity of access to digitised archives allows those who are able to, to continue with some research. This year, many undergraduate and mastersŌĆÖ students completing desk-based dissertations will also benefit from the extensive EAP collections. I am certainly grateful to EAP for facilitating a useful contingency for my own research plans. 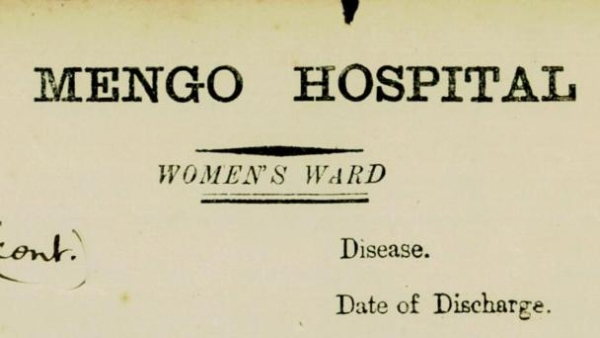 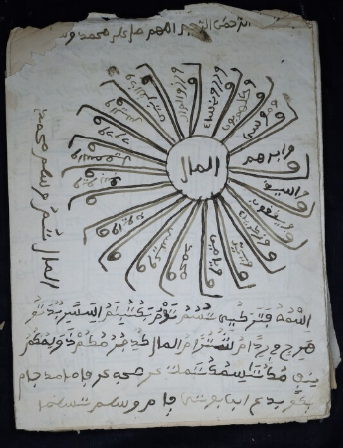 This pilot project produced a detailed survey of all the material held at the Nairobi Railway MuseumŌĆÖs archive and digitised a small sample of photographs. The sample images were taken circa 1901 before and during the construction of the Uganda railway, which runs through present day Kenya and Uganda. They depict the landscape and daily life of the regionŌĆÖs local inhabitants. 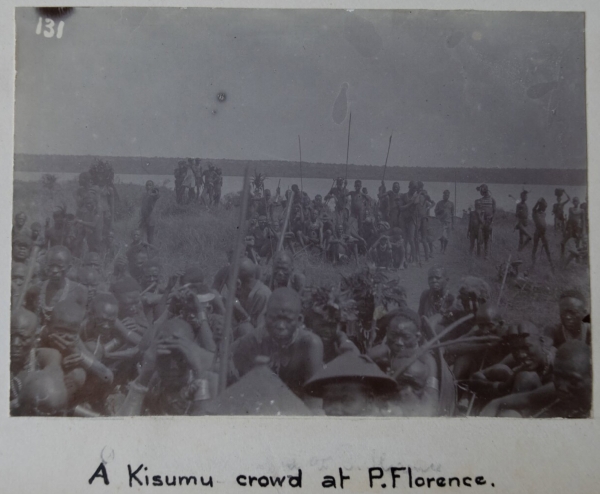 EAP and the Covid-19 crisis 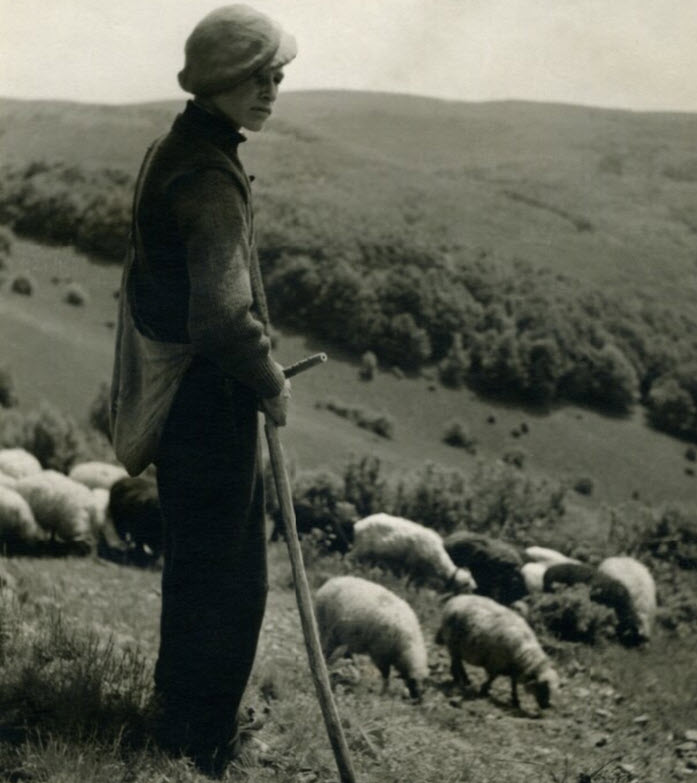 The uncertainties around the coronavirus emergency have meant that we have taken the difficult decision not to award any new projects in the current round. We expect to be making further announcements in the coming months about what a future funding round will look like, and we are ensuring the projects that are still in progress are supported wherever possible.

Meanwhile, our rich and diverse collections are still online for all to explore for research, entertainment and enjoyment. We have over 7 million images and 25,000 sound files, and furthermore we are still able to put new projects online. We will be showcasing these in the coming weeks and months, so stay tuned!

Posted by Endangered Archives at 5:32 PM