WhatŌĆÖs in a name? The Sovietisation of the Mongolian language and the Challenges of Reversal

One of the newest EAP projects to go online is EAP890, which contains two collections of Mongolian newspapers, covering the period 1936-1945.

Written in traditional Mongolian script, these newspapers offer a fascinating insight into the history of Mongolian politics and society. They also provide a Mongolian perspective on international affairs, including the dominant global event of the period: the Second World War.

What's in a name?

But beyond the content, even to the untrained eye, this collection shines a light on a key period in MongoliaŌĆÖs history, as the influence of the Soviet Union intensified eastwards after the 1917 Russian revolution.

Even if you cannot read the traditional Mongolian script these newspapers are written in, a quick glance at different editions of the Ardyn Undesnii Erkh collection prompts a simple question: why did the name of this newspaper keep changing? The answer lies not in typographical errors and careless editing; it is much more profound.

The newspaper title when printed in traditional Mongolian script was always consistent (see yellow boxes below). But alongside this was a variant title written in an alternative script (see red boxes).

What is going on?

These changing titles are indicative of a pivotal period in Mongolian history.  They reveal a process of linguistic revolution, which act as an important indicator of the broader social and political changes that Mongolia experienced during the mid-20th century.

The Sovietisation of Mongolia

Situated in the heart of central Asia, Mongolia is surrounded by two global superpowers: Russia to the north and China to the south. Between the late 17th  and early 20th centuries, Mongolia was controlled by the Chinese Qing dynasty. Throughout this period, local dialects predominantly used the vertical Mongolian script, which was adapted from the Old Uyghur alphabet after Genghis Khan captured an Uyghur scribe at the beginning of the 13th century, during the formative years of the Mongol Empire.

After the fall of the Chinese Manchu dynasty in 1911, Mongolia swayed between independence and continued control by the new Republic of China, until Russian troops entered Mongolia in 1920 and defeated the Chinese army a few months later.

In 1924, the Mongolian People's Republic was established and during subsequent decades Mongolia became increasingly aligned with the recently formed Soviet Union.

During the 1930s, Mongolia was subject to a series of brutal purges. Buddhist monasteries were destroyed and tens of thousands of people were killed. This process intensified as the world drifted towards war. Notable politicians, including Mongolian prime ministers Peljidiin Genden and Anandyn Amar were arrested and shot in the Soviet Union, accused of counterrevolutionary activity and spying for Japan.

These purges were ordered by the Soviets, but largely overseen by Khorloogiin Choibalsan - sometimes referred to as the 'Stalin of Mongolia'. Choibalsan was in Russia as a student when the 1917 Bolshevik revolution took place. He returned to Mongolia inspired by the Bolshevik cause and after Stalin came to power in Moscow, Choibalsan gradually emerged as the principal conduit for Soviet influence in Mongolia. By 1939, after the arrest of Amar, Choibalsan had become Mongolia's dominant political leader. 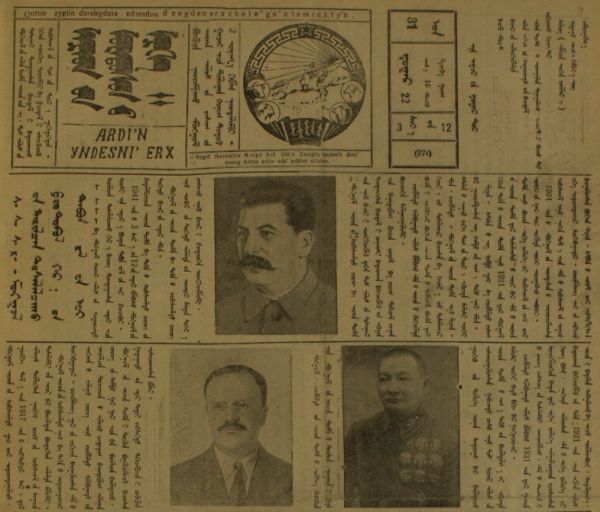 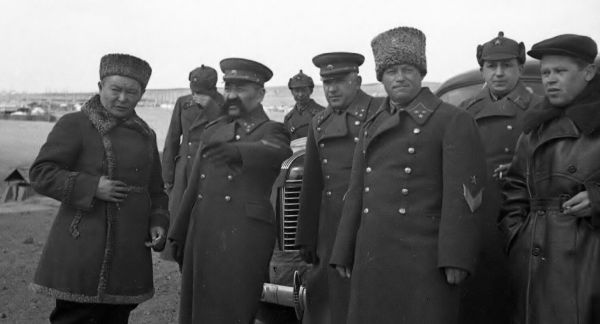 During the next few years, the Sovietisation of Mongolia continued unabated and part of this effort included Russifying the Mongolian language.

While violent purges provide stark evidence of political change, alterations to the national language were also a significant part of the Sovietisation process.

Initial attempts to unify languages within the communist sphere centred on the Latin script. A 1932 Soviet report explained that a unified script would create a system for use by the working masses, as opposed to multiple narrow systems designed for use by the ruling classes. During the late 1930s this objective continued, but Cyrillic became the preferred, unifying writing system.

The first two extracts above, from early 1941 editions of Ardyn Undesnii Erkh, represent a hangover from those initial aborted efforts to Latinise languages within the Soviet Union during the 1920s-30s and replica efforts in Mongolia. In the early 1930s, a Latin alphabet containing 24 dominant characters emerged in Mongolia. This shift was subsequently aborted and in 1937 the former Minster of Education  was prosecuted for crimes which included trying to destroy the Mongolian national script. But in early 1941, after the rise of Choibalsan, Latinisation re-emerged. And on 21 February 1941, a resolution was passed in Mongolia to approve a 42-letter Latin script. This decree was short-lived, though, as a month a later, on 25 March, Cyrillic was adopted as the preferred alternative to the traditional Mongolian script. Five years later, this change was enforced

The processes of both Latinising and Russifying the Mongolian language were neither straightforward nor definitive. The subtle and gradual alterations to both the Latin and the Cyrillic versions of the titles evident in these newspaper demonstrate this.  The task of using new alphabets to represent an existing language was subject to intense linguistic debate.

As the last national newspapers printed in traditional Mongolian script before the forceful switch to the Cyrillic script on 1 January 1946, these two newspaper collections offer an important insight into the nature of those debates and provide a potentially useful dataset to help better understand the mechanics and subtleties of this linguistic revolution.

By the time of this enforced change, Unen had already transitioned. When the final edition available in this collection was published on 31 December 1945, the only remnant of the traditional Mongolian script was the title; the rest of the newspaper was printed in Cyrillic. 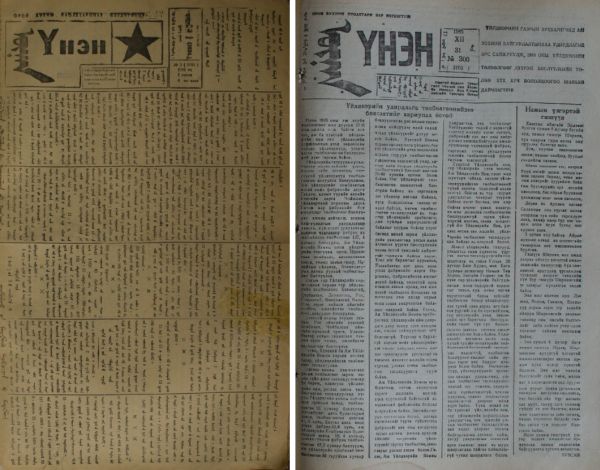 When the Sovietisation process began, the titles were the first parts of these newspapers to change. When the process was complete, they were the last thing to remain.

Beyond communism and 21st century challenges

Since the collapse of the Soviet Union in 1991 and the end of communism in Mongolia, efforts have been made to resurrect the traditional script, which is still used in the autonomous Inner Mongolian region of China. This was initially scheduled for 1994, but Cyrillic was re-confirmed as the national script by the Mongolian parliament in 1995.

Twenty years later, in February 2015, the Mongolian government passed a new law which asserted that the traditional Mongolian script, found in these two newspapers, should once again be the national script by 2025. But it may not be that simple.

As I discovered when cataloguing this project, implementing this policy requires technical change as well as political will. It had been our intention to catalogue the collection using the traditional Mongolian script that the newspapers were predominantly written in. However, while the traditional Mongolian script was added to the unicode standard in 1999, there are several design issues that remain unfixed and a lack of support for fonts required to display the script correctly. The 2025 target has provided renewed motivation to address these  issues. But it remains to be seen if and when the existing technical problems will be resolved.

For now, therefore, the titles for these collections appear in the EAP catalogue only in the modern Mongolian Cyrillic script and transliterated Latin script.

But once you get beyond the name, the digitised content is there to be explored in the traditional Mongolian script - providing a window into the past and possibly the very near future of Mongolia and the significance of its national script.

With thanks to the EAP890 project team led by Bayasgalan Bayanbat for digitising this content, and to Eleanor Cooper with whom discussions about the language and scripts inspired this post.

Posted by Endangered Archives at 8:37 AM

The latest set of projects to go online are truly global, spanning Asia, Europe, Africa, and the Caribbean. Here's a brief summary:

EAP880 - The Palace Archives of the Buddhist Himalayan Kingdom of Sikkim

Located near the Himilayas, where India meets China, Sikkim is one of the newest Indian states, merging with India in 1975. This project digitised the hitherto neglected royal archives of the former Himalayan Buddhist kingdom of Sikkim. It contains a wealth of invaluable documents that date between 1807 and 1998. As such, this collection offers crucial insights into crucial historical events including the merger with India in 1975 and military border clashes between India and China.

This collection covers the entire spectrum of political activities, from domestic and religious issues to foreign affairs. This archive therefore offers unique and important insights into the history of this kingdom and its geopolitical significance.

While it is an archive that represents elite perspectives, the Sikkim Palace Archives is also the first collection of local origin to be made freely and universally accessible for international scholarship, presenting a perspective of events and characters as experienced from within looking out. This provides a valuable contrast to the earlier need to rely very largely on colonial sources for the history of Sikkim. The collection adds considerably to the available sources on the history and culture of Sikkim, with very little duplication of material with that available elsewhere, namely in the British Library's India Office collection, and to a lesser extent in the National Archives of India and the Sikkim State Archives.

EAP914 - Government and Church Records from the Turks and Caicos Islands

This project digitised some of the most vulnerable and important collections located at the Turks and Caicos National Museum. It contains two sub-collections:

The government records include documents and correspondence involving the colonial secretary and despatches to the governor-in-chief. It also includes legislative and executive council records. This collection thus offers important insights into the colonial governance of the islands, which is still a British Overseas Territory.

Meanwhile, both the government and church collections contain registers of births, baptisms, marriages, burials, and wills. The church collection includes both Methodist and Anglican church records, spanning 1799-1922. These registers provide an invaluable resource for genealogists researching their family history.

This pilot project focused on three collections of 19th century and early 20th century manuscripts located at the Institute for Ethnology and Folklore Studies with Ethnographic Museum, within the Bulgarian Academy of Sciences. It produced a detailed survey of the collections and digitised a sample of manuscripts.

These manuscripts reflect the cultural and folklore heritage of Bulgarian and Balkan areas and include hand painted texts, images, and notated songs.

The EAP1144 project team encountered an archive that was in a significant state of disrepair. One of their first tasks was to erect plastic sheets to provide immediate protection to the documents from rain water leaking through the roof.

This pilot project resulted in a survey of the archive and the digitisation of a sample of documents. These include 68 personnel files for railway employees and two files containing correspondence.

Posted by Endangered Archives at 9:02 AM