We are excited to launch a new crowdsourcing project that explores the links between slavery and newspapers in late 18th and early 19th century Barbados: Agents of Enslavement: Colonial newspapers in the Caribbean and hidden genealogies of the enslaved.

This project will examine the extent to which newspapers facilitated and challenged the practice of slavery. It will also help to reveal the identities, networks, and acts of resistance of enslaved people hidden within these printed texts.

You can find details of how to get involved at the bottom of this blog post. 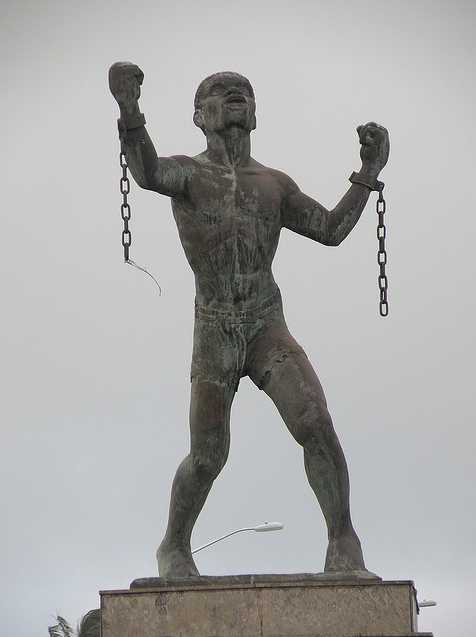 Barbados is particularly significant in the history of Caribbean enslavement because this is where Britain’s trans-Atlantic slave plantation model began in the 17th century, before spreading throughout the region.

Other European empires had enslaved and transported Africans to plantations in the Americas since the 1500s, but it was in the 17th century that English capitalists industrialised this process and created what historian Hilary Beckles described as the ‘first black slave society’ in Barbados. English (and later British) capitalists purchased men, women and children enslaved in Africa, brought them to the Caribbean, forced them to work against their will, and then enslaved their children, grandchildren, and so on.

This model officially ended after the 1807 act to prohibit the trade of enslaved people and the 1833 act to abolish slavery altogether – though enslavement effectively continued until 1838 in the guise of transitional ‘apprenticeships’, which was essentially enslavement by another name. Even after this date, many people had little choice but to continue working for their former enslavers on very low pay.

While the British enslaved people for hundreds of years across the Caribbean, this project is centred specifically on the abolition and emancipation period of the late 18th and early 19th century in Barbados, the place where Britain’s barbaric colonial slave plantation system began.

This project will focus on two newspaper titles, which are already free to view online:

The physical copies of these newspapers are located at the Barbados Archives Department, where they were digitised by a local team thanks to funding from the British Library’s Endangered Archives Programme.

While these newspapers are already available to view online, this project will help researchers interrogate the content, assist family historians to trace their ancestors, and help to memorialise individuals who resisted enslavement.

We are conscious that the material we are asking people to engage with is disturbing to read. The nature of this project means that users will see terms that are now considered discriminatory, harmful or offensive. The newspapers also contain graphic descriptions of how enslaved people were mistreated.

While this was a period in which calls to end slavery were eventually enshrined in law, racialised enslavement was nonetheless rife and accepted. Abolition and emancipation were far from unanimous and these newspapers reflect this. The way that these publications normalise slavery and abuse is particularly shocking.

We therefore strongly recommend that users consider this carefully before engaging with this project. And if you do get involved, please consider taking regular breaks and referring to the resources we have included to offer support.

The project has two main aims:

The first crowdsourcing task launched on 20 July will contribute to both these aims. It asks contributors to identify four specific types of newspaper advertisement / notice:

The second crowdsourcing task will ask contributors to transcribe key information from the adverts identified in the first task. This will include information such as names, ages, and places. It will provide the platform for creating a database of people identified within these newspapers, but also create a dataset for analysing trends within these adverts.

Finding the voices of the enslaved in the words of enslavers

These tasks could seem depressing, as users identify advert after advert that facilitated and supported the practice of slavery and dehumanised the people who were enslaved.

Yet while the adverts are written from the perspective of enslavers, they often provide a unique record of an enslaved person’s existence, identity, and actions. This is particularly true of the fugitive advertisements as every advert seeking the re-capture of an enslaved person who had escaped captivity represents an act of resistance.

The degree to which the actions and identities of enslaved people emerge from the page often depends on the needs of the enslaver. When offered for sale, people were usually anonymised. The very first edition of The Barbadian newspaper contained an advertisement for the sale of two people; both identified simply by their gender, number of children, and domestic skills. 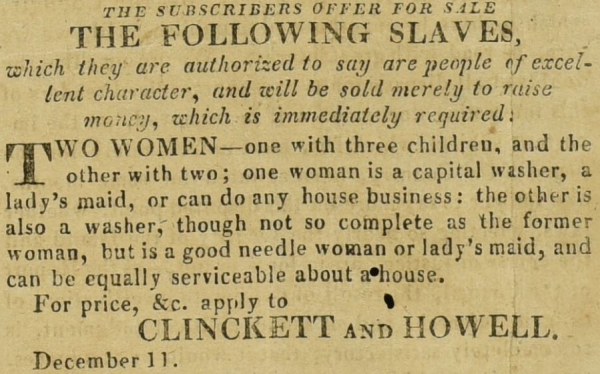 But when enslavers were seeking the return of those who had escaped, their identities were necessarily revealed. To achieve their objective these adverts required detailed descriptions. The better the description the easier it would be to track down the fugitive. 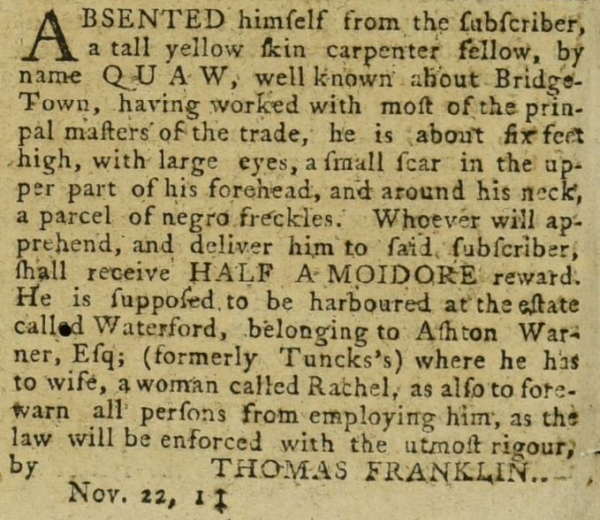 Now, two hundred years later, these adverts act as a record of each fugitive’s individual existence and agency. These descriptions enable us to identify individuals and map both social and geographic connections. Fugitive adverts usually specify locations and often mention family members and other associates who might know where a fugitive is hiding. This will therefore enable us to try to establish networks of people and places and potentially identify patterns of resistance.

This enhanced level of detail represents the interests of the enslaver; but it reflects the actions of the enslaved.  These adverts reveal a powerful narrative of resistance that reminds us that these people were neither generic nor passive victims. They were individuals, with families and friends, who fought against oppression.

What will we do with these adverts?

This project seeks to help bring these acts of resistance to the fore, individually and collectively.

Once we have a dataset of adverts drawn, classified, and transcribed by crowdsourcing contributors, we will use these in several ways.

The results of these first two tasks will also enable us to analyse the adverts at scale, to observe patterns and answer compelling questions. Did one newspaper do more to facilitate the practice of slavery than another? Did a particular type of advertisement increase or decrease at any given time? If so, can these trends be linked to other events, such as major revolts or legislative changes?

We will also make the datasets freely available via the British Library’s Research Repository  so that anyone can access and re-use the crowdsourcing results for their own research purposes.

The current task to identify four types of advertisement and notices is just one aspect of this project. Further tasks will include one to transcribe key information from these adverts and another that will ask users to label selected articles as either pro- or anti-slavery.

This latter task will help us understand whether attitudes expressed within these newspapers changed over time and the extent to which these newspapers provided a means to challenge the practice of slavery as well as facilitate it.

How to get involved

To achieve the aims of this project, we need your help to reveal the secrets hidden within these newspapers.

Anyone can get involved simply by visiting the crowdsourcing site and going to the “Classify” page.

You do not need to register to take part. However, if you choose to register as a contributor, this will enable you to engage in discussions and ask questions on the talk boards. It will also allow us to acknowledge your contribution to the project.

We recognise that engaging with this will be a painful experience for many, but we believe this is a worthy and significant endeavour that will help researchers understand the relationship between newspapers and slavery, and help to remember and highlight the humanity and resistance of people who suffered and fought against enslavement.

It is thanks to the award of the British Library’s Coleridge Fellowship that we are able to carry out this research project. And it is thanks to the work of the Barbados Archives Department that we have access to the digitised newspapers to work with.

Over the past month we've continued making new archive collections available to view through our website. You can read about the individual projects below.

EAP951 - Records from the archives of Tristan da Cunha Tristan da Cunha is a small island located in the southern Atlantic Ocean and known as “the remotest island in the world”. Its isolated location means it has unique flora and fauna which have been studied in scientific expeditions since the 19th century. Some of the records include diaries and other documents related to these expeditions, as well as reports on the number of penguins, seals, and other wildlife on the island.

The isolation of this British Overseas Territory is also interesting from a social history perspective. Records include copies of correspondence about life on the island, appeals for members of the clergy, and even a letter from 1815 regarding the establishment of the British colony.

This blog post written by the project holder gives further information about this project and the challenges involved in setting up the project in such a remote location. 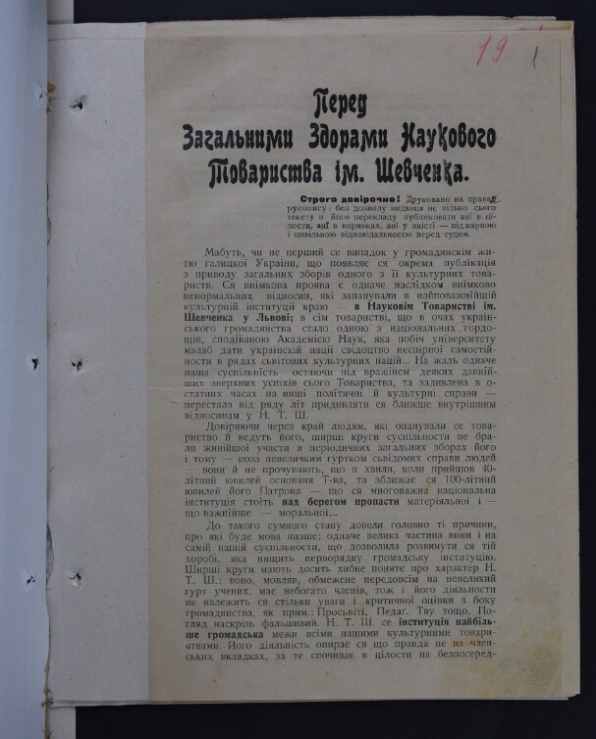 The Shevchenko Scientific Society (ShSS) in Lviv is a Ukrainian institution that specialises in the history of Central and Eastern Europe. It was founded in 1873 and is dedicated to the promotion of academic research and publication. Subject areas include Philosophy, Philology, Ethnography, Mathematics, and Natural Studies. The ShSS played the role of the Academy of Sciences before the foundation and opening of the Ukrainian Academy of Sciences, Kiev in 1918.

Records digitised include a complete set of the scientific journal "The Notes (Memoirs) of the ShSS" (1892-1937). There are also many other documents regarding scientific and organizational activities of the ShSS. These include: minutes of general meetings; statutes; details on commissions granted by individual sections of the society. 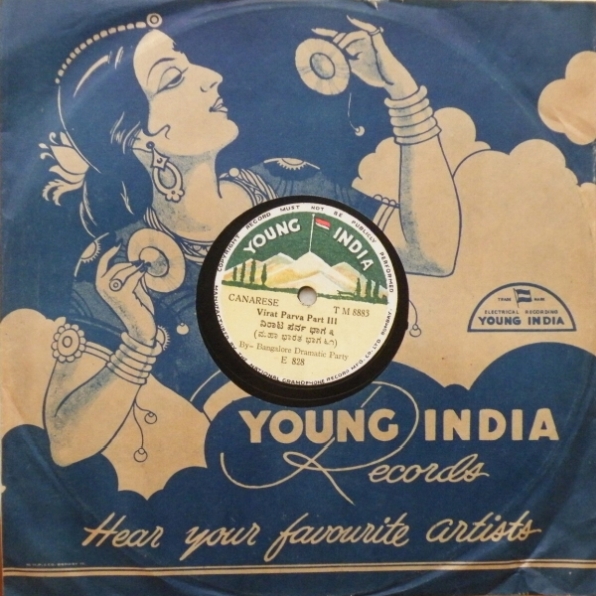 This project digitised gramophone records, disc labels, record catalogues and publicity material from ‘The National Gramophone Record Manufacturing Company Ltd. Bombay’, which issued records under the ‘Young India’ label between 1935-1955. The company produced over 10,000 titles on 78-rpm, 10 inch diameter shellac discs with two songs per disc. The recordings of film, popular, classical and folk music, as well as educational material were issued mainly from amateur or up-and-coming artists. They feature music from different regions of India, sung in many different languages. While the audio recordings have been available on BL Sounds for some time, the related images of Young India ephemera are only now available again via the EAP website.

Posted by Endangered Archives at 4:41 PM