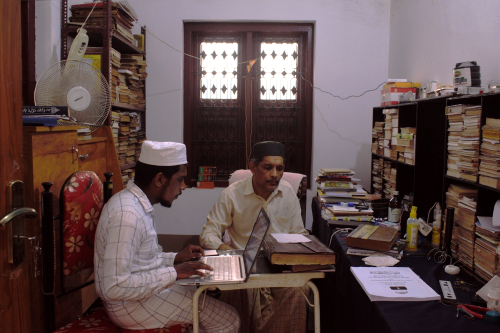 Carrying out a digitisation project in between the pandemic waves entails many challenges that only a fabulous and resourceful project team can successfully tackle. Luckily, a pilot project (EAP1228), undertaken between November 2019 and January 2020, organised and trained such a team just before the pandemic started. The pilot project delivered a survey of handwritten manuscripts at the family archive of Sayed Ali Ba Alawi (Ali Thangal) and organised a team of three digitisation and cataloguing trainees, Sajeev, Fasil, and Muneer. We were also fortunate to have the best digitisation expert in Kerala, Shiju Alex (see here), who trained Sajeev and Fasil in capturing images and working with the hardware and software in the most professional way. Shiju continues to support the current project with advice and guidance, as Sajeev and Fasil manage the digitisation process efficiently and to the highest standards. Sajeev has just completed his MPhil in Malayalam and Cultural Heritage Studies at the Shree Shankaracharya University of Sanskrit (regional branch in Thirur). Fasil, a BCom graduate, is a talented photographer, who had produced charming videos of mawlid chanting for the pilot project in 2019. Muneer is a madrasa student in Kodiyathur with proficient knowledge of Arabic and Malayalam. He works on the catalogue and is supported remotely by the PI in inserting diacritic marks and metadata on a spread sheet, not a trivial task at all when one’s pronunciation of the Arabic language is coloured by Dravidian phonology. 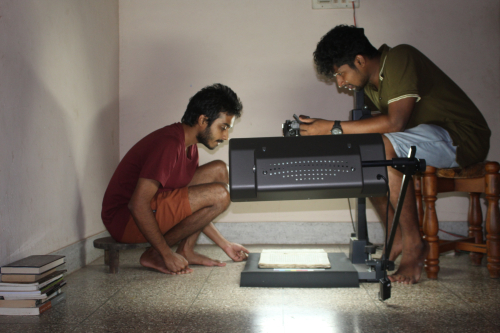 Ali Thangal and Muneer work closely on the catalogue of the manuscripts’ image folders, while Sajeev and Fasil work on capturing the books. Ali Thangal’s archive is dynamic; it keeps on changing like a river flowing along a curvy path, at times thickening, at times splitting into rivulets. Ali Thangal takes great efforts in finding the names of authors and scribes when they are not specified in the manuscript. He opens reference books and crosschecks names and titles to complement missing information wherever possible. Muneer on his part skillfully checks for details online to harvest metadata whenever the need arises. And so, the information on each and every text is represented in the most coherent manner possible. The project PI guides Muneer in typing the metadata, translating titles into English, and typing diacritic marks according to academic standards. This is done remotely. We rely on broadband internet connection for meeting on Zoom to work together on the catalogue.

Of the archive’s contents, especially challenging are the majmuʿas, or anthologies with several manuscripts bundled in one volume. From the perspective of researchers, we would like to keep these majmuʿas intact, as they represent performative, living traditions. But the perspective of the archive owner, Ali Thangal, is somewhat different. He would like to represent his collection in the most accurate way, as it is going to be displayed on the website of a prestigious, world-famous library. This brings about some changes in the behaviour of Ali Thangal’s dynamic archive. And so, the first majmuʿa to have been digitised was dismantled into three parts, each with its own complete manuscript with a brand-new binding. The second majmuʿa, however, remained intact upon the PI’s request. This Majmuʿa al-Mawlid is a collection of seventeen smaller manuscripts, all are devotional poems of praise to Muḥammad, of course, but also to his family members Ḥamza and Fāṭimah, to other saints such a Muḥyi al-Dīn (Shaykh ʿAbd al-Qādir al-Jilānī) and other saints and spiritual figures, including Jesus (Mawlūd al-Qudus). Of particular interest is the mawlid dedicated to the legendary Hindu king Cēramāṉ Perumāḷ, who is believed to have converted to Islam and met the Prophet before dividing his kingdom into twelve districts, each with its own mosque. This tradition was passed down in Arabic texts and Malayalam palm leaf manuscripts, and possibly orally as well. However, this mawlid of Sharamā Farmāḷ (or, in Arabic: Mawlūd Tāj al-Dīn al-Hindī) is a new source that has not been studied so far. It is a significant discovery, because the mawlid genre is evidence for oral transmission and performative background. Such discoveries make this project especially exciting and motivating to continue unearthing the textual heritage guarded so lovingly and meticulously by Ali Thangal. 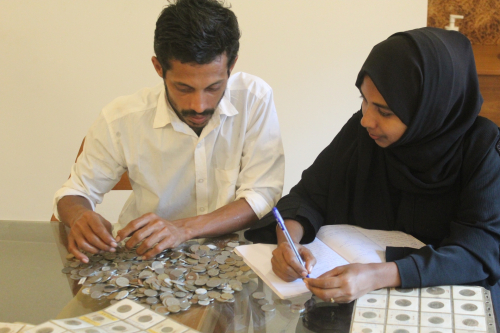 Two more team members, Ashir and Safvana, are in charge of coordinating the project in Mattool and organising home stay and homemade food for Sajeev, Fasil, and Muneer. But there is more to it than merely organisation and hosting; Ashir and Safvana have collected historical objects and stored them in their house. We therefore use this time in Mattool to survey the objects in their home for planning a future digitisation project to include also these valuable historical artefacts. Once the bulk of the surveyed manuscripts has been completed and stored online, we have started to survey the objects in Ashir and Safvana’s home. We have decided to start with their impressive coin collection, with some coins going back as far as the sixteenth century. The reason is that for the survey we need to know the size and weight of the objects, so we can plan what equipment is required for capturing tridimensional, asymmetric objects, some of which are quite bulky. The coins are relatively simple as they are small. And so, we purchased a caliper and a kitchen scale so that Ashir with the support of Sajeev and Fasil can start working on the coin survey.

There is a greater vision behind this ongoing project in Mattool. The team members hope to further develop this initiative into a heritage preservation project. Ali Thangal, Ashir, and Safvana had established a cultural association, the Mattool Hazrami Foundation, long before the project PI first approached them. Ashir was fostering a dream to establish a local museum for the objects in his collection so they will be better preserved and attract visitors from the vicinity, perhaps even tourists from afar. The objects and documents in Ashir’s collection are historically significant, as Ashir is a descendant of the Kuñjāli Marakkārs, those famous valiant seafarers who served the Zamorins of Calicut as their naval forces in times of war. It is the same legendary Cēramāṉ Perumāḷ commemorated in the Arabic mawlid, who bestowed Calicut upon the Zamorins, along with a sword to fight, defeat, and claim territory from all rival petty kings settled in the divided kingdom of Malabar. Ali Thangal’s living, restless archive cannot be captured in images alone; its textual heritage underlies con-textual associations on both local and trans-local levels. We all hope that the vision to establish a cultural heritage centre to digitise, preserve, and display Mattool’s hidden treasures will become a reality despite the challenges to realising dreams in times of turbulence and uncertainty.

Posted by Endangered Archives at 9:09 AM