February may be the shortest month of the year, but it is another month packed with newly digitised collections being added to the EAP website. The three latest projects to go online include:

EAP791 - Manuscripts of the Lanten community in northern Laos

Members of the Lanten community migrated from the Guizhou, Guangxi and Yunnan Provinces of China into Laos and Vietnam following the social, political and economic upheavals during the last century of the Qing Dynasty (1644 to 1912).

Lanten (also known as Lao Huay and Yao Mun) are classified as one of the 39 ‘ethnic minorities’ of northern Laos that are officially acknowledged by the People’s Democratic Republic of Laos.

Written in Classical Chinese supplemented with lexemes from Lanten language, these manuscripts mediate the transfer across the generations of the religious knowledge and verbal and non-verbal expertise enabling ritual experts to communicate with the Deities of the Lanten pantheon. To that end the manuscripts contain instructions for rituals of healing, marriage, death, ordination, and exorcism, specifying the sacrificial procedures and the Deities involved.

This major project followed on from pilot project EAP700. Led by Dr Appasamy Murugaiyan, the EAP981 team digitised the remaining rare documents kept under the guardianship of the Jaffna Bishop House in Sri Lanka.

The digitised material covers the period between 1775 and 1948.

This pilot project, led by Dr Magdalena Slavkova, produced a survey of 52 collections of material relating to Protestant communities in Bulgaria.

In addition to the survey, the EAP1145 project team, which also included Dr Mila Maeva, Dr Yelis Erolova, and Dr Plamena Stoyanova, digitised a sample of 69 files from these collections.

The story of the Yi archives

Human beings use the spoken word and written texts to pass on knowledge. In keeping with the theme of story-telling, here as a part of knowledge transfer, I thought I'd point to the material copied by one of our completed projects: Preservation and digitisation of Yi archives in public and private collections in Yunnan, China. This material is endangered not only from the physical conditons of its storage but also from its history of neglect and unfriendly government policies. The Yi archives contain the history and culture, religious beliefs, etc of minority groups in China.

Texts from the Yi archives, originally, were written for a local audience. They preserve a body of knowledge that is peculiar to the Yi that informs and explains aspects of how they view the world and the afterlife. Their oral literature, as tales or fables, are embedded with traditional wisdom, their clan histories re-tell the past, relating it to the present, and their religious practices help them make sense of the world and their place within it. These stories, histories and rituals belong to the Yi socieites from which they grew. They contain knowledge that connects the generations to each other and to the world as they experience it.

Here is a page recording the beginning of a sutra to pray for fortune: It is important to preserve what remains of these written records as this will save also the language they are written in. Preservation of the language will in turn allow further study of the Yi people and Yi culture. Texts copied by the project include almanacs, sutras and practices used in ritual, the histories of families and records of oral stories. Traditionally the Yi texts are kept by priests who have responsibility for recording, saving and using them. These records are fast becoming all that is left of the story of the Yi people. For this reason the Project had a strong focus on making them widely available, to facilitate and encourage further research.

This page is from an almanac: 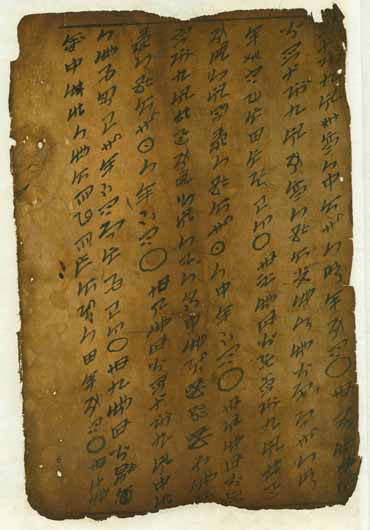