The writer Keith Waterhouse had what some may consider an unusual lifelong obsession with the urban environment. As a boy he started the Middleton Hiking Club (membership: one) and launched many expeditions across Leeds (crawling through storm drains and navigating the ‘Murder Woods’) to relocate the suburb of Hunslet where he was born – and which he thought far more interesting with all its grimy liveliness than the characterless council estate to which the Waterhouses had moved. He also played truant frequently, drawn to the landmarks of Leeds city centre which he would regularly treat to a ‘good long stare’ (his favourite being the lights of the OXO sign which he believed to be operated by a man continuously flicking the switch on and off day and night). A strange pastime for a young boy, perhaps, but all those hours of staring really paid off when it came to his writing.

In the Suburbs section of the Writing Britain exhibition (alongside works by J G Ballard and Angus Wilson) we will be displaying a notebook for Waterhouse’s third novel Jubb. The novel is set in the fictional New Town of Chapel Langtry, built according to a ‘Master Plan’ which renders it a safe yet sterile environment for its inhabitants. Given his appreciation of mixed-use communities, it may be surprising to learn that Jubb was inspired by Waterhouse’s own move to the New Town of Harlow (though he admits in his memoirs that this decision was based on a passing resemblance to Helsinki which soon faded on closer acquaintance).

In Jubb the inhabitants of Chapel Langtry are ‘leading what we call a conformist existence, up to the arms in never-never for the car and the telly, working hard at their jobs… and then of course at night they can’t let off steam in the pubs as they did in Stepney, Knees Up Mother Brown, because all the public houses in Chapel Langtry have composition floors’. To peeping tom Jubb’s delight these pent up feelings lead to outbreaks of exhibitionism and Jubb makes use of his local knowledge to go walkabout at night hoping to catch a glimpse:

The streets themselves are mainly cul-de-sacs, so naturally you can’t go dodging up and down them at this time of night, peering up at the front bedrooms – you’d be run in under an Act of Parliament going back several hundred years. What you have to do is go round the back, along Grand Avenue, hoping to see what you can in the back bedrooms. 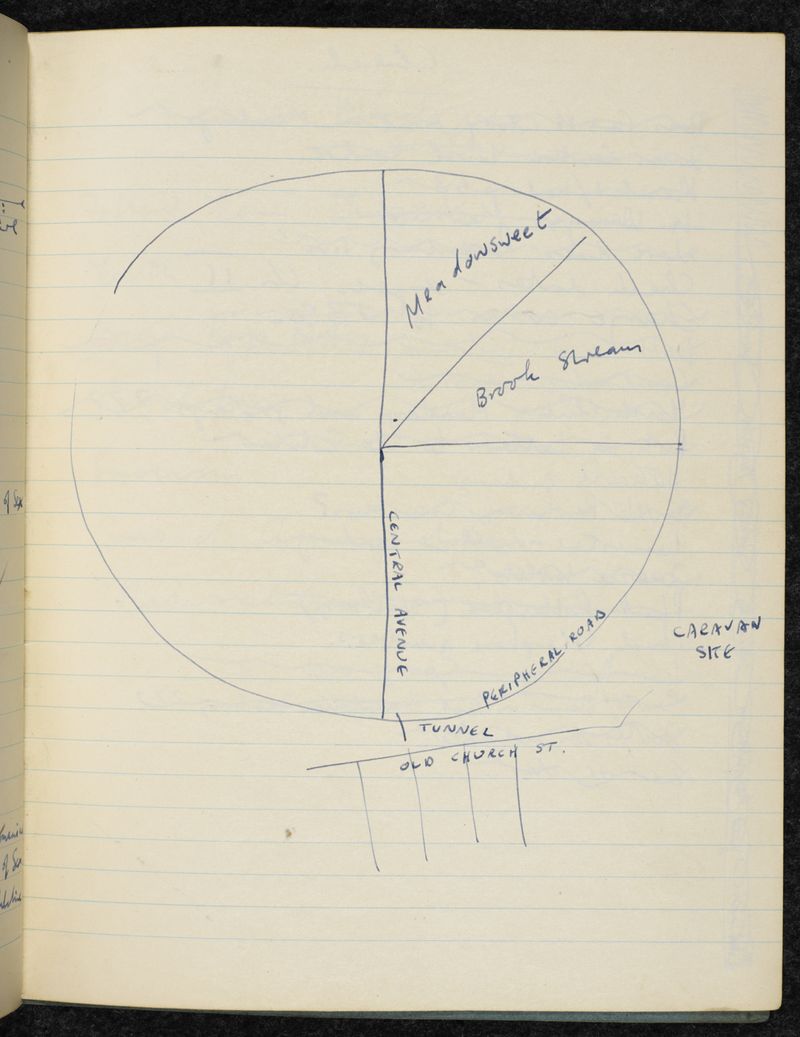 This page from the Jubb notebook is an example of Waterhouse’s tendency to sketch out the settings for his novels. Here we have a diagram showing Chapel Langtry, which, like Harlow, was divided into self-contained neighbourhoods each with their own shops and pub. For Waterhouse’s characters it is often only when they cross town boundaries – to the caravan site in Jubb or Stradhoughton Moor in Billy Liar - that they gain a certain freedom from social strictures.