Some advice for Boris

It’s been quite a psephological few days… Boris vs Ken; Hollande vs Sarko; Greece vs the EU.

Nothing, however, being new under the sun, writers have been considering the rights and responsibilities of elected officials for quite some time, and a nice example features in Writing Britain.

In our Cockney Visions section, we’re displaying a late 14th-century manuscript of William Langland’s allegorical poem ‘The Vision of William concerning Piers the Plowman, together with Dowell, Dobet and Dobest’, commonly known as ‘Piers Plowman’.

William Langland (c.1325 - c.1390), was born and raised in Herefordshire but lived for many years in London.  Although his poem famously opens with a vision, dreamt ‘on a May morning on Malvern Hills’, 'Piers Plowman' contains many detailed topographical descriptions of London streets and life in the capital. Indeed, his vision of the capital is already a lively one - a portrait of living in the poor London district of Cornhill, ‘among London’s lollers and unlettered hermits’.

As part of the poem, Langland describes the duties and obligations of the Mayor of London- as one academic has written, ‘in the community in which Langland lived, it was the Mayor, rather than the King, who really mattered and exercised authority over the inhabitants of the city.’ Something Boris would, I'm sure, be cheered to read.

The Mayor is exhorted in the poem first of all not to ‘overcark the comune’ – not to overburden/exploit the common people (seen here in this late 14th-century manuscript copy).

But the Mayor is also given exceptionally detailed instructions in the poem - to punish ‘on pillories and pining stools/bakers, brewers and cooks’ for their fraudulent behaviours- these men ‘harm  most the common and poor’ by cheating them: not giving full measures on the goods they sell, letting out properties at extortionate rates to build themselves grand houses.

Against the handwritten reference to ‘bakers, brewers, bartenders’ in our manuscript, a later 16th-reader has added, punningly, “3 bees that sting the poor and needy’. 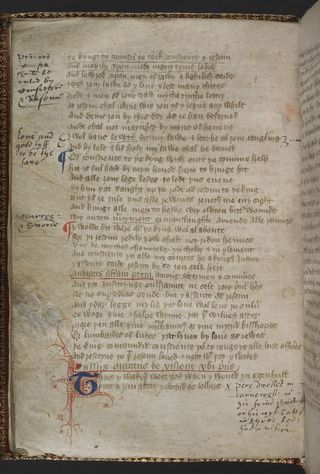 The poem suggests that the Mayor has been turning a blind eye to these practices –and, worse, in an early cash for honours scandal, suggest that the mayor needs to be careful not to allow people to buy themselves freedom of the city as a freeman ‘for any price’ - he accuses Mayors of granting freedom of the city in return for silver or gifts.

Cash for honours, watered down beer, exploitative landlords… all things for the 14th-century Mayor to crack down on; and, we might feel, advice as valid 600 years ago as today.

Posted by Jamie Andrews at 5:48 PM

Thanks for your comments, will look into this at once

The Writing Britain exhibition is well designed, with a wide variety of exhibits (books, MSS, illustrations) and welcome audio clips. The one thing I would criticize are the inaccuracies in the annotation. In the very first case it is asserted that Polyolbion means 'Many Albions' -- it is in fact a Greek compound, meaning 'with many blessings'. Later we told that Gladstone was Prime Minister in 1843/4 (he first became Prime Minister in 1868), and later again that Charles I was 'on his way to execution' in 1646. It's a bad sign what even the staff of the British Library don't check their facts.