The Cockney Visions section of Writing Britain features arguably the most legendary barber of all time - Sweeney Todd. Famous for slitting his customer’s throats and covering his tracks by sending the bodies to be made into pies, Todd made his debut in 1846 in a penny blood story called The String of Pearls: a romance. The story begins with the disappearance of a sailor who was bringing a memento to the sweetheart of a man lost at sea. The sailor's faithful dog alerts his friends to his disappearance, whereupon it is discovered that he was last seen entering Sweeney Todd's Barbers. Romance, bravery and carnage follow. This first incarnation, although gruesome, did at least bear the hallmarks of a love story - albeit one peppered with savage murders and the unintentional consumption of human flesh.

An expanded version of the story was published in 1850, this time with the more telling subtitle ‘The Barber of Fleet Street. A domestic romance’. It is this edition that is on display in the exhibition (at a page depicting the ominous barber’s chair and the imminent demise of the unsuspecting man sat in it) and not the 1846 version, in which the illustrations are rather tame [see below]. 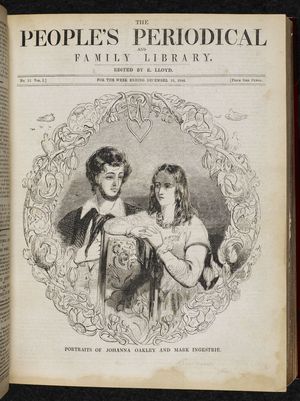 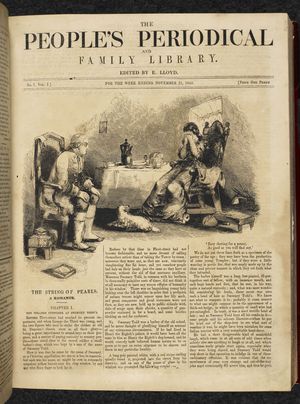 Later incarnations of Sweeney Todd (of which there are many) tend to gloss over the romantic aspects and more openly embrace the monster lurking behind the barber shop doors.

The idea of a murderer turning their victims into pies would not have been new to many of Sweeney Todd’s original readers. There were several stories and urban legends around at the time that ran along similar veins, which would have provided perfect inspiration for a penny blood story – writers of the genre were never afraid of ‘borrowing’ the odd story line or two. Penny Bloods were serialised fiction that provided cheap, entertaining reading for the working class population of 19th century Britain. The colourful stories full of unsavoury characters and sensational plots were accompanied by gruesome illustrations. They were the violent video games of their day; perceived as corrupting influences that would inevitably pervert the minds of their readers towards depravity and crime. While there is no evidence to suggest that he inspired a generation of amateur butchers, Sweeney Todd’s character has certainly endured - he has become embedded in our culture so deeply that one can almost smell the stench from his abattoir when passing St. Dunstan’s Church in Fleet Street.

Further information about the British Library's world-class literature collections can be found here.