"Only a small story ...." Laurie Lee and Cider with Rosie

Last week we heard the first hints about Danny Boyle’s Opening Ceremony for the Olympics.  As I wrote in a piece for The Guardian, the ceremony's vision and reception has been infused with literary references. And, particularly, references to Writing Britain. The pastoral idyll that Boyle conjures forth from the ground of E20 is the theme of our exhibition’s opening section- Rural Dreams - that looks at how the  restorative possibilities of the British countryside have been celebrated in English literature since the early 16th century. We see this earthly paradise of rural dreams as very much a literary construct- from seventeenth-century poet Katherine Philips’s hymn to T'he Country Life' (as she titled her 1650 poem):

‘How sacred and how innocent
A Country Life appears;
How free from tumult, discontent,
From flattery, or fears!’

…to Edward Thomas’s freeze-framing of time one sunny day in June 1914 (they had sunny days back then) when his train stopped, unexpectedly, in Adlestrop:

‘And for that minute a blackbird sang
Close by, and round him, mistier,
Farther and farther, all the birds
Of Oxfordshire and Gloucestershire.'

But what’s most interesting about rural writing is the degree of distance sometimes apparent between the writer and the country life described. Just as Thomas was merely passing through Adlestrop, so many writers describe and remember the countryside while embedded in very different environments.

This was the case for Laurie Lee, whose manuscript for Cider with Rosie with is displayed in the exhibition. Lee’s autobiographical tale describes the moments when the world opened up to his small Cotswolds village of Slad in the years after the First World War, but was written in the early Cold War years.

As Lee recollected, the world that he was writing in was by now far removed –and the stakes so much higher- than the events he was describing:

'I remember towards the end thinking "why am I writing this in a world which is so threatened by the dark clouds and threats of cosmic destruction?" This is only a small story, it can only interest my family and a few neighbours.'

Interestingly, the scrap of paper on which Lee has drafted his novel is a BBC radio script- Lee has turned it over, and used the verso to draft Cider. These are typescripts of radio plays and documentary programmes produced by the BBC and given to Lee by Louis MacNeice, and give a nice sense of a childhood tale of rural life written from, and on, the absolute heart of a metropolitan cultural elite. 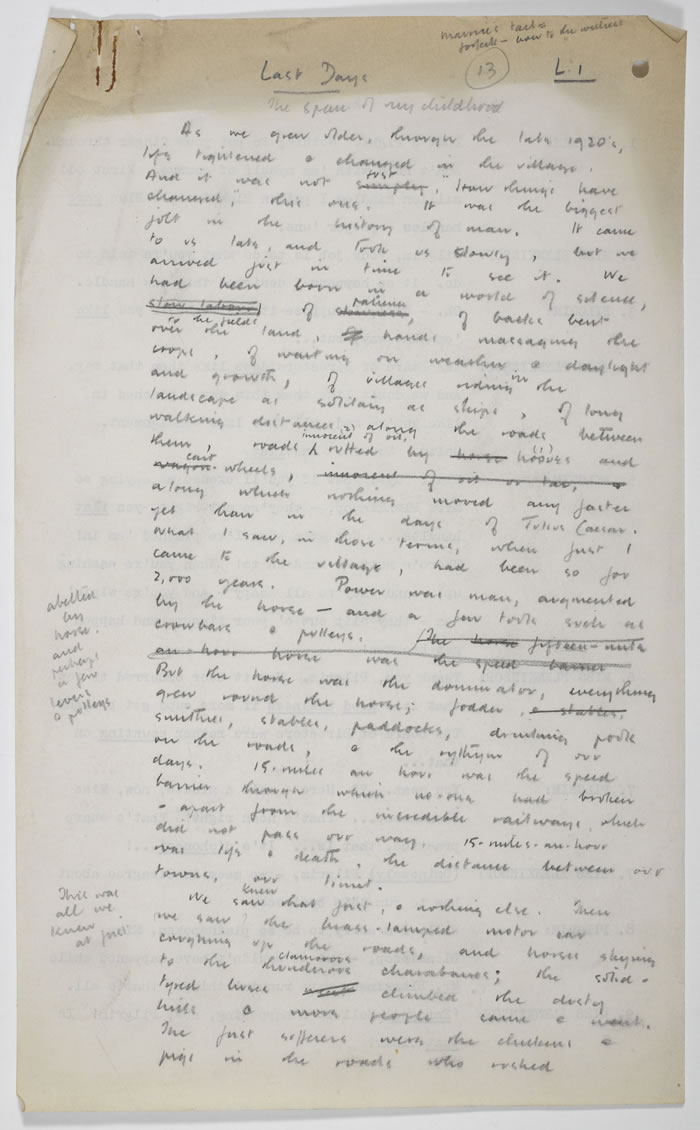