Guest post by Liz Mathews whose artist's book, Thames to Dunkirk, is currently on show in Writing Britain 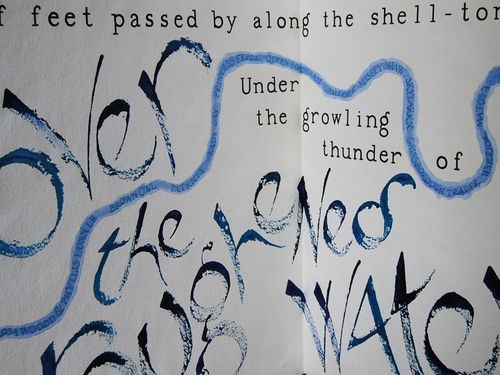 London page
Standing on a bridge over the Thames viewing a water pageant in 2012 might remind the observer of Virginia Woolf's survey from that vantage point of the procession of the patriarchy in Three Guineas, her discussion of militarism and women's attitudes towards war. There, despite her acknowledgement that 'some obstinate emotion remains, some love of England dropped into a child's ears by the cawing of rooks in an elm tree', she rejects the possibility of patriotism for a woman, claiming that 'As a woman I have no country... As a woman my country is the whole world'.
Virginia Woolf was my initial inspiration for the making of Thames to Dunkirk, my 17m long artist's book now showing in Writing Britain. I read in her diary of the event that was 'Dunkirk 1940' - including the vivid story of her neighbour Harry's escape. Reading more accounts in the Imperial War Museum I was struck by the variety of experience within this shared event for each of the more than 300,000 people there, as well as those who waited at home - a spectrum of responses from triumphant relief to dissent and bitterness - and I gradually perceived this 'Dunkirk' phenomenon as a constructed myth both created and subverted by thousands of individual stories.
Perhaps the same could be said of the complex collection of disparate responses aroused by our individual places in the shared landscape, as revealed in Writing Britain. In this context, Thames to Dunkirk reads as a mapping of a peculiarly British event, drawing together many personal perspectives of a collective experience. I decided that an artwork engaging with these tensions would have to be on a very large scale, to reflect the surreal enormity (Thames to Dunkirk is one of the largest books in the British Library). Then I considered how to represent this multiplicity of response. Again, Virginia Woolf provided a key: 'I should like to write four lines at a time, describing the same feeling, as a musician does; because it always seems to me that things are going on at so many different levels simultaneously.' (letter to Stephen Spender 1934).
The first of my four lines is a watercolour map of the Thames from source to sea, running along one side of the book, with the names of the little ships volunteered for the rescue lettered from the first navigable point all along the river’s length in a mounting tide, out into the estuary and the channel. Alongside the surging force of the river to the sea, two lines of text run the full length of the double-sided book. 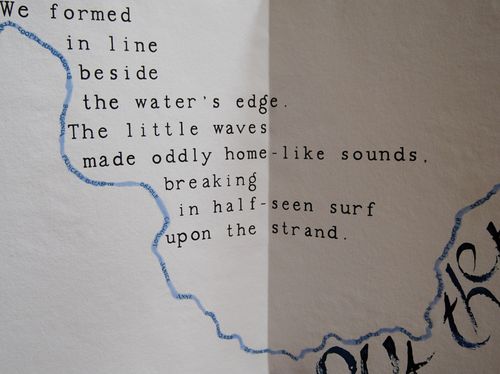 Thames side
The text above the river line is BG Bonallack’s graphic account of one person’s experience of Dunkirk, lettered by brush in a font from a 1940s typewriter. The second text running below and through the water is from Virginia Woolf's The Waves; I lettered this freehand with a pen made from a piece of driftwood from the Thames. It provides a powerful undercurrent to the narrative; the juxtaposition of the two texts reveals a protesting resistance to the overwhelming compulsion of conformity, duty and acceptance of authority.
The fourth line is formed by a watercolour of the great stretch of Dunkirk beaches (running along the other side of the book) where the endless lines of stranded men queuing right out into the sea are lettered with names of many who were there. Each letter represents a person, the mark made with a wooden peg to reflect the hastily improvised nature of the rescue operation. 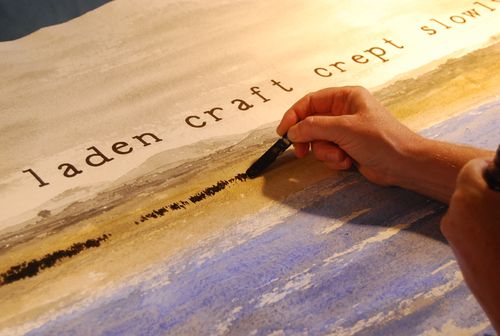 Dunkirk side
There's an account of the making process (and some of the problems of working on that scale in a small London studio) on my blog at A topography of Thames to Dunkirk, and a full sequence of page-by-page images to be found on The Dunkirk Project, an online installation collecting accounts of Dunkirk 1940 and contemporary responses. I'll be joining curator Rachel Foss on a tour of Writing Britain on 3 July at 6.30pm to talk about Thames to Dunkirk, with my driftwood pen, and I'll also be showing the working model for it as part of my demonstration of artist's books on 23 June at my exhibition light wells.
Thames to Dunkirk was made in 2009, just before the 70th anniversary of Dunkirk, and it was not intended as a celebration or commemoration of the event, but rather as a continuation of the questioning of patriotism that Virginia Woolf expressed, and an exploration of the significance of our place in the landscape. Perhaps, from her bridge across the Thames, she would have recognised the feelings of the man on the boat in HG Wells's Tono-Bungay: 'To run down the Thames so is to run one's hand over the pages in the book of England from end to end. Light after light goes down.  England and the Kingdom, Britain and the Empire, the old prides and the old devotions glide abeam, astern, sink down upon the horizon, pass - pass. The river passes - London passes, England passes...'