I have just come back from this year’s conference of the British Association for Victorian Studies (BAVS), hosted by the University of Sheffield. This year’s conference theme was ‘Victorian value’ and speakers presented papers on a wide range of topics which explored the idea of value and the valuable within the social, political, ethical, spiritual and aesthetic discourses of the nineteenth century.

One of the most interesting sessions I attended was the Digital Humanities panel, which included a talk by Ian Gregory on the value of using Geographical Information Systems (GIS) in studying literary and historical texts of the Lake District. ‘Mapping the Lakes’ is a British Academy funded project by Lancaster University to undertake a literary mapping of the Lake District. The pilot project focusses specifically on two canonical tours of the region: Thomas Gray’s tour in the autumn of 1769 and Samuel Taylor Coleridge’s 1802 tour, recorded in his ‘Lakes’ Notebook.

Using a variety of techniques – including digitisation and tagging of the texts, ‘density smoothing’ to highlight the amount of time spent in/relative altitude of the areas visited, and exploratory maps which similarly use a system of shading to delineate imaginative and emotional responses to landscape and environment - the project has created a number of visualization tools offering different cartographical versions of Gray’s and Coleridge’s tours.

The value for readers and researchers of using such tools is clear: even for the reader who is well acquainted with the region, attempting to visualize the network of relationships between the myriad places mentioned by the poets presents a considerable challenge. The site – beyond its pilot stage – will also allow the integration of a vast amount of disparate data sources, such as images, topographical drawings and census information – which will enable the reader to assess the texts within their wider cultural and historical context. Avoiding the pitfalls of some digital humanities projects, whose sophisticated visualization tools can run the risk of rendering the literary text obsolete and divorcing the reader from a response to the text, the project seeks to enable both an abstract mapping and a geographically enhanced reading: to encourage a return to the text with an increased understanding and enlarged perspective. Offering the chance to overlay and compare the maps generated, the project - taking its cue from the work of the twentieth century poet Norman Nicholson - presents a visualization of the Cumbrian topography as a palimpsest: a landscape whose every detail and feature is documented and can be excavated in multiple literary texts.

Thomas Gray and Samuel Taylor Coleridge both figure prominently in the British Library’s Writing Britain exhibition. One of the sections of the exhibition explores the idea of literary tourism and the Lake District, along with other areas of the country such as the Wye Valley and the Scottish highlands, became one of the centres of tourism when that industry began to develop in the mid to late eighteenth century. Guidebooks for the burgeoning tourist market proliferated (Thomas West’s 1778 Guide to the Lakes was one of the earliest and most influential), informing travellers which places they should see, the correct vantage points from which to view them, and even advice on the correct equipment (eg a Claude glass and sometimes camera obscura) that they should take to facilitate their viewing experience. 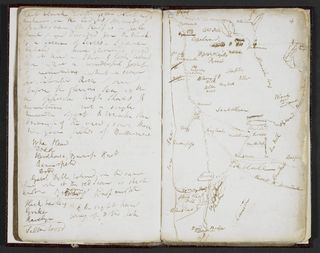 Within this section of the Writing Britain exhibition, visitors can see on display a volume of maps owned and annotated by Thomas Gray and the manuscript of Coleridge’s ‘Lakes’ Notebook, in which he records the nine day tour (or ‘circumcursion’, as he called it) which he made round the Lake District in August 1802. The British Library holds over fifty Notebooks of Coleridge, and this one, which contains his sketches as well as his reflections on the majesty and sublimity of the landscape, is one of the most compelling and moving of the series. Also displayed is one of Dorothy Wordsworth’s Journals (generously loaned by the Wordsworth Trust), in which she records her walks around the area, often with her brother, William. Alongside this are shown a manuscript of William’s poem (entitled ‘On Seeing Some Tourists of the Lakes pass by reading; a practice very common’) and the 1835 edition of his Guide to the Lakes. Written in 1805, although not published until fifty years after his death, Wordsworth’s poem chastises the tourists who, overly influenced by the popular guidebooks, flock to the Lake District and are content with an inadequate and vicarious experience, mediated through what they have read, of the glorious and awe-inspiring landscape which surrounds them. Wordsworth’s own Guide was written as a corrective to the numerous existing guides to the Lakes and advocates the need for a wholeness of perception (an encounter beyond the merely visual), seeking to communicate to visitors his own love and reverence for his native region. 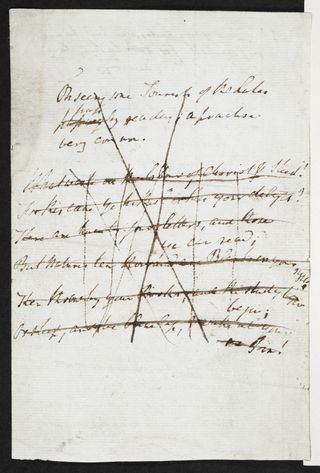 William Wordsworth, ‘On seeing some Tourists of the Lakes pass by reading’, 1806. © British Library Board

Aligning and juxtaposing these various voices, the exhibition similarly suggests a textual palimpsest, layered over time, created for this area of the country. The spiritual resonances within all of these representations of landscape are key, and these writers’ responses to landscape are situated within a wider nineteenth century dialogue between the value of solitary, individual encounter and the ideal of shared, communal experience. Both the British Library’s exhibition and Lancaster’s ‘Mapping the Lakes’ site offer a chance to reflect on the theoretical and philosophical implications of this debate in our contemporary response to landscape, literature, and the relationship between them, as well as the opportunity for direct engagement with some of the most famous literature of the Lake District.

Writing Britain: From Wastelands to Wonderlands runs at the British Library until 25th September