With the grace and strength of Mo Farah kicking for home, Writing Britain is lengthening its stride and entering the final bend (i.e. it’s closing soon on 25 September). We’re continuing to get some nice reviews- including an exciting two pager in Newsweek- but we’ve also been involved opening a new exhibition at King’s College London’s Inigo Rooms dedicated to the writer, critic, storyteller, and artist John Berger.

This week we’ve been installing some of the John Berger archive in the exhibition space at KCL, and have been carefully monitoring light, humidity, and temperature levels in the gallery. The necessary attention to environmental conditions is a far cry from the last time I saw the Berger archive: at Berger’s home (carefully laid out in the stables) in the French Alps, where I had gone to arrange his papers.

John had generously agreed to donate his archive, consisting of nearly 400 files of drafts, notes, correspondence and cuttings collected over 60 years of work as a storyteller, artist, poet, critic, screenwriter and farmer. I collected it from his home in 2009, recording my progress on a series of audioboos. 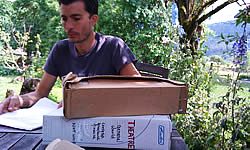 Having brought the archive back to the Library- and got rid of any insects who might have come along for the ride- the papers were catalogued by Tom Overton as part of an Arts and Humanities Research Council-Funded Collaborative Doctoral Award between the Library and King’s College London, and Tom has also curated the current exhibition, Art and Property Now.

As a huge fan of Berger’s work- and the spirit that informs it- I was keen to include some of the Berger archive in Writing Britain as well. Although now based in France, he is a Londoner born and bred, and returned to London in his 2005 stories Here is Where we Meet.

One of the stories, ‘Islington’, looks at the idea of the suburbs as a state of mind, reminding us that the London borough of Islington was once ‘remote and faintly suspect’. Berger followed in a tradition originating with the poet Edward Thomas in 1906, who wrote that the suburbs were not a matter of geography, but rather a ‘problem of the mind’.

Berger notes how ‘poor and therefore uneasy districts … are pushed, in the imagination of those who are prospering, further away than they really are’ and thinks ‘today Islington is far closer than it used to be’. The manuscript of this text is in the introduction to the suburbs section, alongside manuscripts of Conan Doyle and JG Ballard, all examining under-examined edge-lands that are, in the words of JG Ballard, ‘more interesting than people will let on’.

Having emphasised Berger’s engagement with the idea of suburbs, I was pleased to discover a companion piece in Tom’s exhibition- a drawing called ‘London Suburb’. The drawing dates from the 1940s, when Berger’s studio was in a maid’s room on the top floor of a house on Pilgrims Lane, Hampstead, and the drawing was made looking out of the window in the room next to it, towards Downshire Hill.

Hampstead, like Islington, no longer so suburban, but a nice link across two exhibitions- and more than sixty years of acute observation and compassionate writing/drawing.