Privates on Parade- Theatre of War

Peter Nichols’s Privates on Parade (with music by Denis King) opened on Monday night at the Noel Coward Theatre, and has been garnering rave 5* reviews from the print press this week; good enough to raise a smile on even this (faux-) grumpiest of playwright’s faces.

Having enjoyed the final preview of Privates on Saturday (the title doesn’t disappoint, incidentally, with no lack of Privates’ privates on parade), I went back to Nichols archive in the British Library this week to look again at the papers relating to the play. Peter’s archive is a key component of our post-War British theatre collections– although his wickedly subversive formal experimentation marks him out from many of the more formally cautious social realist writers of the period.

The first item in the folders relating to Privates (British Library Additional MSS 78985-78988) is a glossy hotel brochure for the Merlin Hotel Group: ‘a most exciting holiday experience in Malaysia and Singapore’ with ‘a standard of service that makes you feel really important’. The ‘standard of service’ the brochure promises British visitors to Malaysia in the 1980s is a far cry from Peter’s play, set during the Malayan ‘Emergency’ in 1948, although the region’s post-war economic miracle is cheekily signposted in Michael Grandage’s new production.

The play follows an entertainment unit called SADUSEA (Song And Dance Unit South East Asia), a fictitious version of the real-life Combined Services Entertainments Unit in Singapore, in which Nichols entertained the troops between 1946 and 1947. As Peter recently recalled, his unit toured a show called ‘At Your Service’

‘We’re men of the service,

We’re at your service - Entertaining you’

around mainland Malaya and Hong Kong to uninterested conscripts, unaware that the show’s performers included soon-to-be stars such as Stanley Baxter and Kenneth Williams. Privates on Parade reworks these memories into a rambunctious ‘Play with Songs’, which balances the narrative of their mission to track down Communist rebels in the jungle, and the stage world of the group’s performances – a separate play within a play that casts the audience as the show’s spectators.

The play was written in the mid 1970s, although some of the set-pieces drew on earlier sketches that Peter devised for end-of-term revues while working as a schoolteacher in the late 1940s (see ADD MS 78985), and the several stages of drafting and redrafting are documented in the archive. 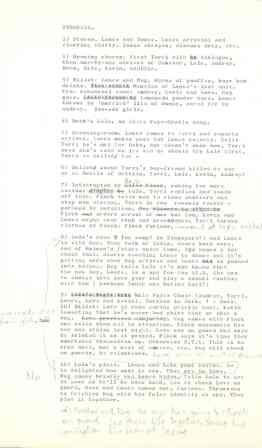 The play was first performed by the Royal Shakespeare Company at the Aldwych Theatre, London, in February 1977, where the star role of flamboyantly camp Captain Terri Denis

‘You dare to speak to an officer like that, and I’ll scream the place down’

was played by the late Denis Quilley, and the fanatically austere Major Flack by the late Nigel Hawthorne (programmes in MS ADD 79185). 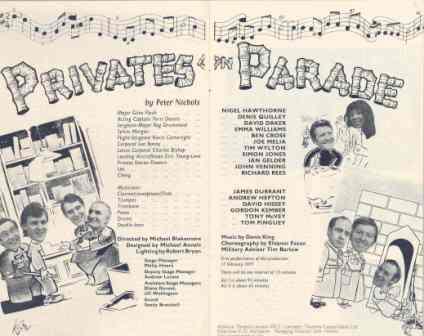 It’s the first time that the play has run in the West End for many years (Michael Grandage directed an earlier production with Roger Allam at the Donmar a decade ago), and it remains a subversively sly, wholeheartedly entertaining evening that is well worth catching.

Posted by Jamie Andrews at 4:23 PM