In honour of December, the month when we can officially begin to get excited about Christmas, I thought I would post some festive illustrations from the British Library’s Dexter Collection of Dickensiana. It is also a fitting way to round off Dickens’s bicentenary year.

Dickens was a great champion of Christmas. The Christmas stories he wrote captured the holiday spirit for his own and future generations. By the start of the 19th century, Christmas had rather fallen out of fashion among certain quarters of society and it was by no means universally celebrated. It was the immortalisation of Christmas tradition in print that largely helped to reinvigorate the festive season. By depicting an aspirational Christmas in literature, Dickens and his contemporaries (such as Thackeray and Gaskell) helped to shape and promote the Victorian ideal of Christmas as a time of joy and benevolence.

A Christmas carol in prose: being a ghost story of Christmas / by Charles Dickens ; with illustrations by John Leech (London : Chapman & Hall, 1843)

To the extent possible under law, British Library has waived all copyright and related or neighbouring rights to Mr Fezziwig's Ball.

Even though Dickens can’t be credited with inventing Christmas, it is hard to separate him from the idea of a Victorian Christmas – he was, after all a Christmas print trendsetter. A Christmas Carol was phenomenally successful and John Leech’s illustrations contributed immensely to the book's charm.

A Christmas carol in prose: being a ghost story of Christmas / by Charles Dickens; with illustrations by John Leech (London: Chapman & Hall, 1843)

Ghost stories at Christmas had long been an oral tradition by the time Dickens employed them in his writings. The cold and the dark drove families to gather round the hearth, and the shadows cast by the fire suggested an excellent setting for sharing ghostly tales. 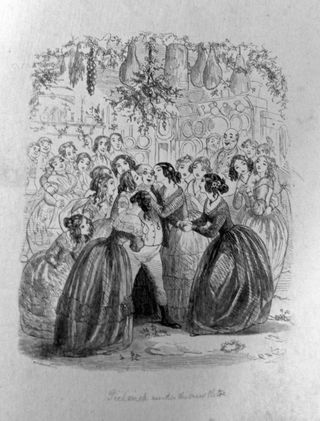 Six original illustrations, to bind with the Volume of The Cheap Edition of The “Pickwick Papers,” engraved on wood, from drawings by “Phiz” (London: Chapman & Hall, [1847])

From a series of six designs issued as ‘extra plates’ issued separately from but simultaneously with the first cheap edition of Pickwick.

This work (The kiss under the mistletoe, by Hablot Knight Browne), identified by British Library, is free of known copyright restrictions. 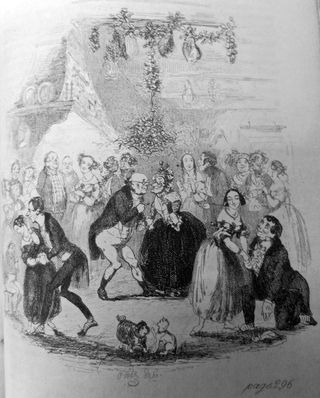 The Posthumous papers of the Pickwick Club ... 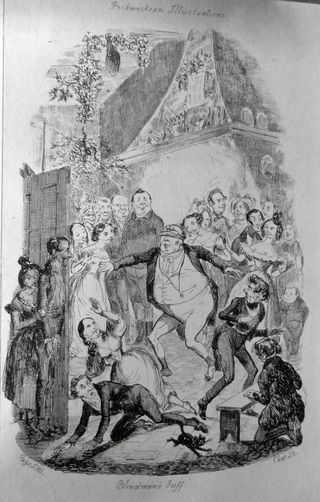 Other Christmas scenes by Dickens’s illustrators … 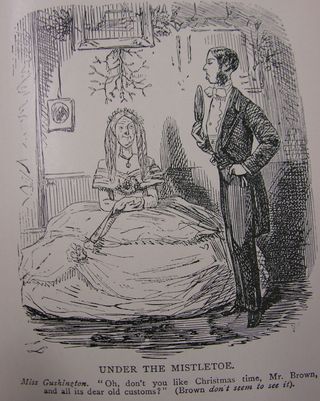 This comic illustration was originally drawn for Punch magazine – to which Leech was a regular contributor. 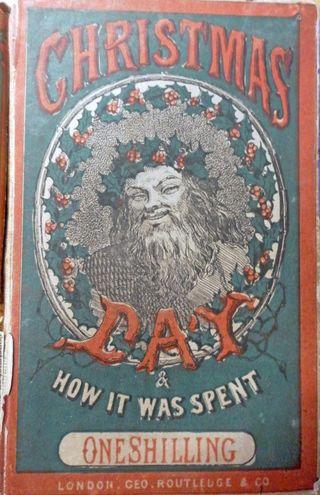 Christmas Day and how it was spent by four persons in the House of Fograss, Fograss, Mowton, and Snorton, Bankers / Christian Le Ros (pseudo. William J. Sorrell) ;  illustrated by Phiz (London: Routledge, 1854)

Hablot Knight Browne (aka “Phiz”) illustrated many of Dickens’s

+++works. His distinctive style is used to great effect in this Christmas book from 1854. 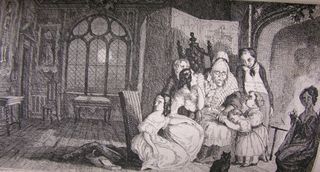 The Book of Christmas / by Thomas Hervey ; with illustrations by Robert Seymour (London : William Spooner, 1836)

Seymour was the original illustrator for Pickwick. The Book of Christmas described Christmas practices and folklore, such as caroling, traditional Christmas games and fare. Seymour’s illustrations are more Regency in style and the characters he draws are uglier and more forlorn than the Victorian Christmas illustrations championed by Dickens’s later illustrators. The warm Christmas hearth depicted here is menacing rather than safe and loving.

So there we go – I claim no comprehensiveness in my list. Dickens wrote numerous Christmas stories, many of which were illustrated; he was also not alone in his penchant for creating festive stories and many a fine Victorian Christmas story can be found as a result (quite a few of them have ghosts in, which makes them even better).

Merry Christmas to us all.

Collected by John Furber Dexter, The Dexter collection, which was purchased by the British Museum in 1969, contains a wealth of printed material relating to, as well as editions of, the works of Charles Dickens (1812-1870). The collection has been microfilmed (Mic.B.613/1-93), and access to the originals restricted. Charles Dickens, the JF Dexter collection: accessions to the general catalogue of printed books, manuscripts, prints and drawings(London, 1974). * Copy in Rare Books and Music Reading Room at RAR 823.8, and in Manuscripts Reading Room at MSS 823.8. Another copy in British Library stacks at B.S.10/434