In Praise of the Unloved

There is something intriguing about forgotten novels by famous authors. Why, for example, do general readers and academics alike adore Middlemarch and Adam Bede and yet leave Romola to gather dust like a neglected maiden aunt slumped in a chair? While many novels are ignored because they are simply rather dull and some because they are just too peculiar (we love Bram Stoker's Dracula while refusing to have anything to do with the bafflingly odd Lair of the White Worm) a few fall into obscurity when they deserve a better fate. A recent enquiry reminded me of one such title - a neglected novel by a famous author that among its many fascinations includes a heroine who works out in her private gymnasium while wearing a pair of pink pyjamas. I shall explain ....

Which novel by Thomas Hardy features, in addition to the heroine with the pink pyjamas, a pistol-packing tattooed illegitimate son of a dashing army officer; an amateur production of a Shakespeare play hastily re-written by the leading man so as to include an unscheduled love-scene with the leading lady and a hero who unfortunately finds himself in a railway tunnel as a steam train approaches? The answer is A Laodicean and while Mary Elizabeth Braddon, the Queen of the Sensation Novel, would have wept with pleasure at any one of these plot elements somehow A Laodicean missed its audience and tumbled from view. 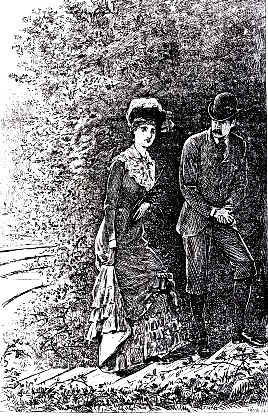 Even the illustrations didn't help .... A remarkably undramatic depiction by the usually excellent George du Maurier of a scene from A Laodicean. George Somerset, the hero, and Paula Power remain curiously unruffled after a close encounter with a steam train.

A Laodicean; or, The Castle of the De Stancys. A Story of To-Day, to give the book its full title, was published in 1881 and has by and large sat undisturbed on bookshelves ever since. Hardy categorized the work among his 'Novels of Ingenuity'; a category shared by the similarly ill-starred Desperate Remedies and The Hand of Ethelberta. The book was written while Hardy was seriously ill and perhaps the combination of looming deadlines and ill-health resulted in a more feverish and uneven imaginative process than usual. The sombre drama of The Return of the Native had gone before and the brilliant gloom of Jude was to come but A Laodicean lurks like an unexpected 'Mr Bun the Baker' card in the middle of a conventional pack. For all of its peculiarities, however, the book is not without interest and certainly deserves better than its generally forlorn status.

While undoubtedly sensational in nature - for example most of the drama actually takes place in a Gothic crumbling castle - A Laodicean highlights, in embryonic form, one of the major changes taking place within society during the 1880s and 1890s, namely the emergence of the independent, educated and free-spirited New Woman. Paula Power, the heroine of the novel, is highly intelligent and for a Victorian mainstream novel really rather racy. During the course of the book she vacillates - hence the title of the novel, a Laodicean being someone lukewarm or half-hearted - between various religions, various plans for the future of her dilapidated castle and various suitors while always remaining ultimately independent of outside influence and true to her own desires. She has charm and character and considerably more spirit than the wet and shabby array of men who make a play for her hand. One somehow always thinks of Hardy as looking back to a rural and romantic past but he was, as his love of the bicycle and the motor car would show, more often than not looking ahead. His sympathetic portrayal of Paula as a woman in advance of her time and a forerunner of more complex characters such as Grace Melbury from The Woodlanders and Sue Bridehead from Jude puts him at odds with many of his contemporaries, male and female, who regarded the New Woman as a mannish, pipe-smoking, child-neglecting monster prepared to put her own unnatural desires before the sturdy duties of marriage and motherhood.

The New Woman as seen in an unsympathetic Punch cartoon - cigarette-smoking, mannish and frankly a bit unnatural. Punch (Vol 108 page 282).

Hardy, I would argue, saw the other side of the coin and in A Laodicean sympathetically portrayed a woman who, though swayed by outside opinion, ultimately decides her own path in life and refuses to follow the conventions set out for her. So, we have challenging social comment, drama, a Gothic castle prone to shedding a turret or two during violent storms, dashing army captains and dopey heros wandering about in railway tunnels. And all this from a largely forgotten book. One never knows just what lies between the pages of those dusty, neglected and unjustly unloved novels.

I first read "A Laodician" many years ago when working through all of Hardy. I loved it then and still do.