Over the past year there have been a number of press articles about the Royal Court Theatre’s preparation for a change of artistic director. Dominic Cooke’s succession is going to be effective at the end of this month. Vicky Featherstone will be taking over, making her director number thirteen since George Devine, and the first woman to occupy the post.

To mark this new chapter in the Royal Court’s history this blog concerns the British Library audio recordings made at the Theatre over the past 40 years.  Of course, if you have your list of missed productions ready you may want to jump straight into the online Sound and Moving Image Catalogue and plan your visit to the Library’s Reading Rooms.

The Royal Court is known as a writers’ theatre. The venue has hosted a long-running young writers’ programme, which has included national and international writers alluring audiences with all sorts of challenging subjects. For example listen to Hanif Kureishi and Karim Alrawi interviewed in 1986 discussing British Asian theatre. Kureishi was the Theatre’s writer-in-residence in 1982 and ran the writing side of the young writers’ workshops for a number of years. See BL reference C311/1. 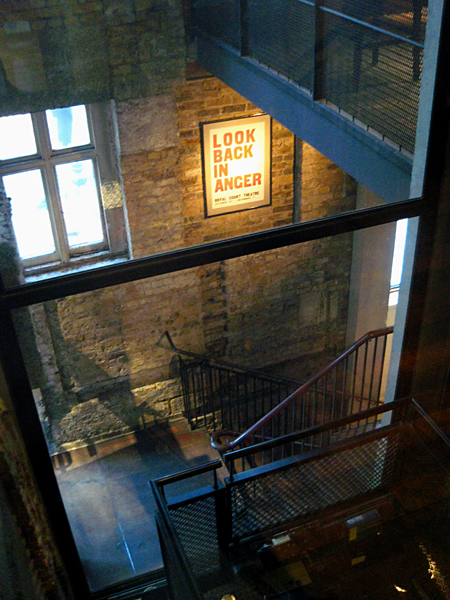 The British Library made its first audio recording of a Royal Court production on 30 October 1970. The play was Home by David Storey, directed by Lindsay Anderson, starring John Gielgud, Ralph Richardson, Dandy Nichols, Mona Washbourne and Warren Clarke. It premiered 17 June 1970 and transferred to the Apollo on 29 July.

Since then, for all the subsequent recordings, the Library has kept a permanent set of microphones hanging from the lights grid of both the upstairs and downstairs performance spaces at the Court. The recordings are part of the Library’s ongoing programme of audio and digital video documentation of performing arts and spoken word, which began in 1963.

The Royal Court recordings collection include plays, pre- and post-show talks and rehearsed readings; forums on European writing, black writing, gay writers and female playwrights; and talks about production, design and acting; occasional gala events and more. All the recordings are listed on the Library’s catalogue. See BL references C1208, C1209 and C311. For material recorded prior to 2006, you will usually need to make an appointment with the Listening and Viewing Service

In 2006, for the Theatre’s 50th anniversary, the Royal Court programmed over 50 rehearsed readings under the title Look back: 50 readings, 50 writers, 50 years. The programme consisted of a selection of 50 plays produced at the theatre from 1956 till 2006, most of which were recorded.

In the same year, Harriet Devine, George Devine’s daughter, published Looking Back: Playwrights at the Royal Court, 1956-2006. The book was based on a series of recorded interviews that she had made with playwrights whose work had been produced at the Royal Court. The original recorded interviews are now archived at the British Library and include writers such as John Arden, Simon Farquhar, Sebastian Barry, Richard Bean, Martin Crimp, Anne Jellicoe, Terry Johnson, Hanif Kureishi, Conor McPherson, David Storey, Timberlake Wertenbaker, Arnold Wesker and Snoo Wilson.

Researchers may also be interested in the collection ‘The Legacy of the English Stage Company’, which comprises a series of life-story interviews covering the careers of theatre directors associated at some point with the Royal Court. See BL reference C1316. This collection has been sponsored by John Hodgson Theatre Research Trust and is an ongoing project curated by the Library’s Oral History section. 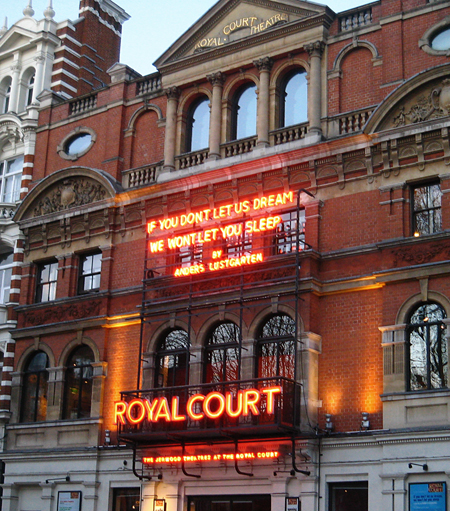 Over the past four years I have had the pleasure of making many recordings for this collection. I would like to emphasise the value to researchers of the post-show talks. They are usually attended by members of the cast, the director and often the playwright, and they provide a valuable insight into the creative process. Along with the recordings the Library also collects a programme or published text for each production.

The Royal Court has an active international programme which showcases the work of young playwrights from around the world, with a focus on contemporary issues. The programme, which is run by Elyse Dodgson, has included readings in translation and discussions of plays with playwrights from Nigeria, Syria, Chile, Romania, India, Georgia and Ukraine, to mention just a few. In August 2011, in the aftermath of the Arab Spring, I recorded ‘After the Spring: New Short Plays from the Arab World’, which presented work from Tunisia, Egypt and Syria followed by a post-readings talk, with the playwrights reporting on the protest movements and what was going on in the streets at the time. See BL ref. C1209/136 and 137.

I have also recorded many of the ‘Rough Cuts’ series of work-in-progress, experimental pieces, readings and shorts, which takes place twice a year, after a gestation period at the Theatre’s Studio. The most recent season ‘Bytes’ was shown in January. Playwrights Alia Bano, DC Moore, Nick Payne and Penelope Skinner presented work examining and exploring our relationship to the internet, and E.V. Crowe a rehearsed excerpt of her new play Searched.

We hope this whets your appetite for the collection. We are always interested in hearing from you and if you have any suggestions please feel free to comment.