The 'Sacred' seasons of live art at the Chelsea Theatre

The 'Sacred' seasons of live art and experimental contemporary performance were started at Chelsea Theatre, London, seven years ago by Francis Alexander, the Theatre’s Artistic Director.

Located in front of the World’s End Estate on the King’s Road, the Chelsea Theatre presents itself as the only London theatre dedicated to the production and presentation of live art performance. Each year Sacred brings together performers and practitioners from all over the world for a programme which also supports early-career artists. 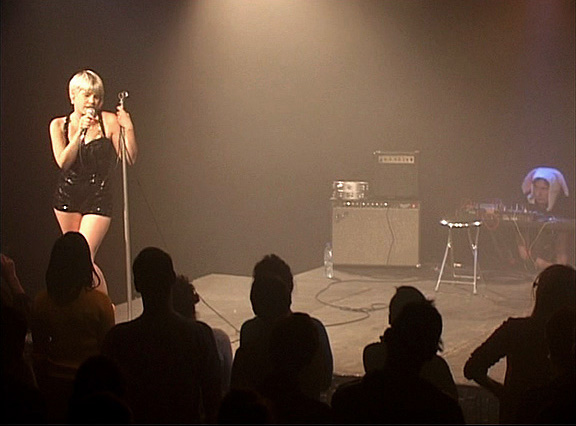 Over the years themes and formats have varied, from one-to-one encounters, late-night cabaret, dance, promenade performances and installations. The 2008 season even included shows taking place inside an old Routemaster bus parked in front of the theatre.

Sacred also provides a place for discussion and engagement in the form of keynote addresses, artist-led workshops, symposiums, talks, lecture demonstrations, post-show talks and interactive critical debates including researchers and members of the public alike, often with an impromptu element.

These events have touched so far on the subjects of socially engaged performance, participation, performing the real, the make-believe world of performance, and most recently, in the current season, on hopes, dreams and predictions for future practice through the Wishful Wednesdays series of artists’ talks. 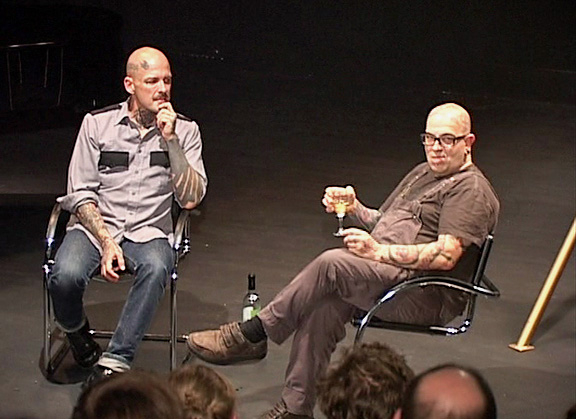 Ron Athey and Franko B in discussion, 2009

Audience involvement is not excluded from the shows and it can take many forms too. For example as a part of a performance in 2008 the duo Leibniz invited spectators to donate a drop of blood to be used as ink in the writing of the Universal Declaration of Human Rights into a thick, leather-bound book. And in 2010, performer Sara Juli put $5000 into the hands of the audience for her show The Money Conversation.

Since the beginning of the first Sacred, in autumn 2006, the British Library has been documenting all the shows and events. Seven seasons later this has resulted in a unique collection of over a hundred and forty video recordings. See BL reference C1214 in the Library’s online Sound and Moving Image Catalogue.

At the British Library we document performances from the audience point-of-view and we never see the shows in advance. Videoing under these conditions can sometimes be challenging. The results are made available for viewing, unedited, in the Reading Rooms. 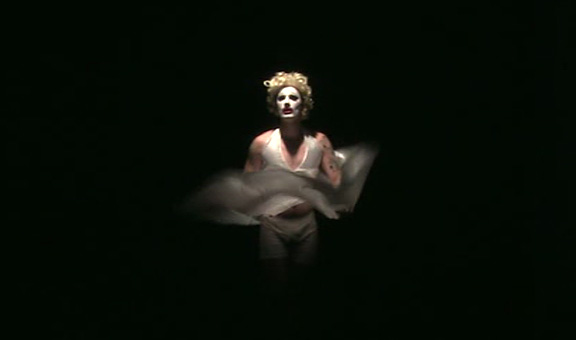 The Chelsea Theatre’s partnerships with international venues such as brut from Viena in 2009 and PS122 from New York in 2010 brought to London the work of Jan Machacek (you delay), Richard Maxwell (ADS) and Young Jean Lee’s Theatre Company (Pullman, Wa), to give just three examples.

The current season is about to end. You are still in time for the last two shows: The Red Album by Rubix Collective on 27 June 2013, and  Anarchitecture in the UK by Richard DeDomenici on 6 July 2013.