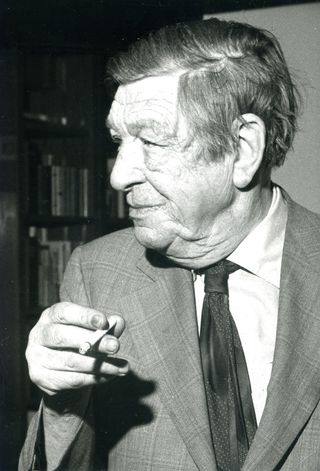 The English and Drama Department made an exciting new addition to the British Library’s literary collections last week. At the Christie’s auction on 12th June, we acquired a fascinating journal of W.H. Auden’s, which was kept by the poet during August to November 1939. The unpublished journal, one of only three he is known to have kept, has been in private hands since his death in 1973. Auden, whose influence on a generation of later poets is incalculable, has been described by his editor, Edward Mendelson, as “the first poet writing in English who felt at home in the twentieth century”.

In the January before the journal opens, Auden, along with Christopher Isherwood, had left England for the United States. This act -  portrayed in the British media as shamefully unpatriotic as the outbreak of war threatened national life - for a time made the writers deeply unpopular public figures. It caused a decline in both the critical reception and the sales of their books and even occasioned adverse comment in Parliament. Auden began the journal in August 1939, on his return from from California to New York in August 1939, after what he described as ‘the eleven happiest weeks of my life’ after the beginning of his relationship with the American poet Chester Kallman. Auden had met Kallman at a public poetry reading. The meeting proved to be instrumental in Auden’s subsequent decision to remain in the US and become an American citizen. A fascinating juxtaposition of personal and political preoccupations, the early pages of the journal are written in the light of the joyful intensity of his new relationship and in the shadow of the impending outbreak of war in Europe. The entry for 1st September 1939 comprises an extended narration on his activities and preoccupations on this date, which sheds light on his famous poem of the same name.

As well as diary entries, Auden used the journal to record his reflections and observations, along with snippets of overheard conversations. In its latter pages the journal becomes a commonplace book of poetry. He also notes his reading and his opinions on other writers (with John Steinbeck coming in for particular criticism). The manuscript also includes drafts of Auden’s own poems, the word-play and metrical games worked out in these pages offering interesting insights into his compositional methods.

The acquisition builds on the British Library’s existing Auden collections. Two Auden poetry notebooks were acquired by the Library in the 1960s under the auspices of the Arts Council’s National Manuscripts Collection of Contemporary Poets. The Library also holds further manuscript drafts of Auden’s poetry and prose, including from his long poem The Orators (1931) and from his late sequence About the House (1966), along with correspondence, including letters to John Betjeman. Rare live and studio recordings of Auden reading his own work are also held in the Library’s collection of drama and literature recordings.

We are going to display the journal in the Sir John Ritblat Treasures Gallery at the British Library from August 2013. You can read a good piece on the acquisition on the Guardian newspaper website.

Auden’s collaborations with the composer Benjamin Britten feature in the Library’s new Folio Society Gallery exhibition, Poetry in Sound: The Music of Benjamin Britten. Among the items featured are a film extract from Night Mail (1936), a documentary for the General Post Office made in 1936, and a brochure relating to The Group Theatre, which produced the plays The Ascent of F6 and On the Frontier (written by Auden and Christopher Isherwood, with music by Britten, between 1935 and 1938). Sandra Tuppen, one of the exhibition curators, has written a blog post about the Auden-Britten collaboration, which you can read at  http://britishlibrary.typepad.co.uk/music/2013/06/poetry-in-sound-exhibition-britten-and-auden-in-the-spotlight.html