Last weekend the Brontë Parsonage announced that it was successful in raising funds to acquire a previously unknown handwritten essay by Charlotte Brontë. Charlotte wrote the devoir, or homework assignment, for Constantin Heger, the married tutor whom she fell in love with whilst she and Emily Brontë were studying languages in Brussels.

The Parsonage’s new acquisition is not the only Brontë devoir to have survived— our Ashley Collection includes Charlotte’s essay on Pierre l’ermite (Peter the Hermit), the priest who according to legend—and in rather un-hermit-like fashion—led the People’s Crusade to the Holy Land in 1096. 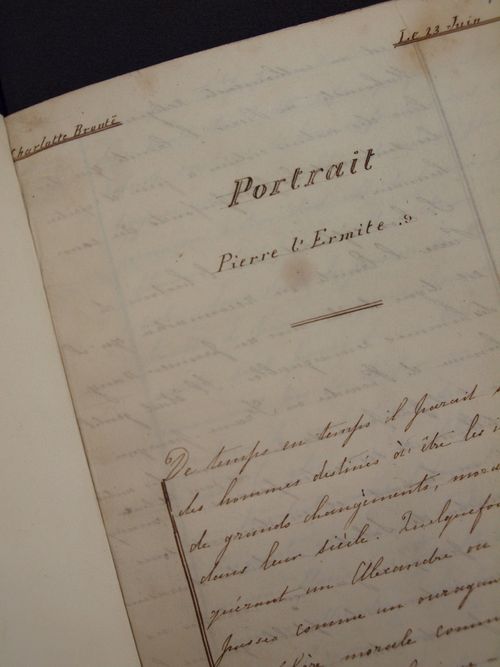 Peter, who Charlotte characterises as short and ugly, roused thousands of people to up and follow him with his passionate oratory and it’s easy to see why he appealed to Charlotte, who was determined to rise above her situation in life through the power of her pen, despite always being self-conscious about her physical appearance and tiny stature (she was less than five feet tall).

This essay, written in French, is an example of Monsieur Heger’s unconventional method of teaching whereby he encouraged Charlotte and Emily to adopt the style of other writers: in this case he used as a starting point a piece by Victor Hugo on the French revolutionary, Mirabeau. Charlotte responded enthusiastically to these assignments, and learnt much from Heger, who had six golden rules for his students. We know about these principles thanks to another student of Heger’s, Frederika Macdonald, who recorded her impressions of him in detail. I have attempted to paraphrase as follows:

Monsieur Heger’s advice to his students

Heger’s advice on imagery and syntax seem to have been particularly helpful for Charlotte, whose later work is a huge improvement on the juvenilia she wrote before her time in Brussels (though greater maturity and experience gained through her unrequited love for Heger must have played a part). In the draft of the essay pictured below, Heger’s pencil delicately cancelled a heartfelt line about Peter’s capability to excite ‘the profoundest sentiments of the human heart’, replacing it with his own image of Peter uprooting nations with the power of thought. 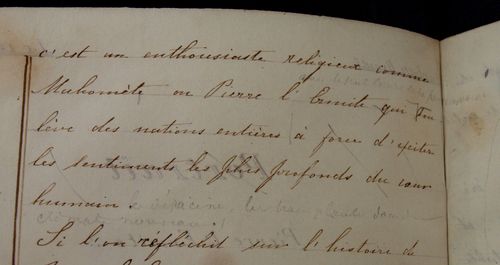 Whilst Charlotte eagerly followed Heger’s method, Emily was resistant to writing in any style but her own. I can’t help but wonder whether it came as a bit of a snub when Emily, who was homesick and ill-at-ease in foreign surroundings, turned in a deliberately patriotic response to the Mirabeau piece in her devoir about King Harold’s resistance to the Norman invasion (one draft of which is held by the Parsonage, the other at John Rylands). To his credit Heger did not take offence at Emily’s obstinacy or her choice of subject matter. He recognised the talent of both sisters and wrote to Reverend Brontë praising them highly. Despite his special treatment of Charlotte, it seems that he regarded Emily as the greater genius of the two.

Now to return to the essay newly acquired by the Brontë Parsonage, which takes the topic of filial love as its theme. I have only seen a photograph of the manuscript on their website, so I eagerly await further details (and a translation – as my French isn’t up to much), but according to the Parsonage the essay, ‘L’Amour Filial’, deals with its subject in dramatic style, claiming that the child who treats a parent unlovingly is little more than a murderer in the eyes of God. What they don’t mention is that this is actually the companion piece to Emily Brontë’s essay on the same subject, which is already in the Parsonage collections.

Until now, scholars had guessed that Emily’s vehement treatise on the monstrous nature of filial ingratitude was a theme of her own choosing. Whilst it could be another example of an imitation prompted by one of Monsieur’s Heger’s dictations, no trace of the dictation survives, and there were no notes to suggest that Charlotte had written on the same theme. Now that Charlotte’s version has come to light, it will be interesting to compare the two. And, since it has been suggested that Emily may have had her brother Branwell’s behaviour towards their father in mind when writing her piece, the discovery of Charlotte’ essay may well fuel further speculation.