There are many contenders for English literature’s worst poem, but one of the most popular choices is also by one of the most interesting characters. In today’s blog post, meet Theo Marzials, the British Library’s very own endearingly bad poet. 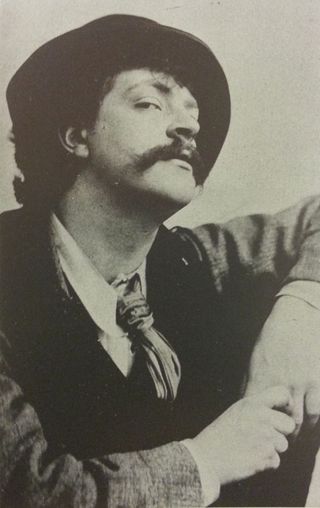 Marzials was 20 when in 1870 he started work in what was then the British Museum Department of Printed Books, and less than a year later he was working as a 'Transcriber' in the Department – a seemingly mind-numbing job involving copying out bibliographic details. He later described his memory of the work as

'the unpleasant severity, the official discourtesy and the irritating surveillance, the pedantry and red tapeism of those weary, alien, sodden years at the Museum.'

However, Marzials found ways of livening it up a little, as is related in Evan Charteris’ book The Life and Letters of Sir Edmund Gosse (Gosse worked in the Department of Printed Books with Marzials and became his close friend; possibly his lover). The Superintendent was the very strict Reverend Frederick Laughlin, a man later dismissed from the staff because he had threatened a colleague with a revolver. He had gone out and the junior staff were wasting time until he returned – which, as it turned out, was unexpectedly soon. Marzials had climbed to an upper gallery of the room, and leant over the railing

‘looking with his wide aureole of golden hair like the Blessed Damozel, and smiled. There was no response. Dead silence save for the droning quills. Leaning still further out, he boomed down on the workers below, “Am I or am I not the Department’s darling?” Laughlin turned his head slowly and looked upwards - one look. Marzials fled, and the sound of his footsteps was heard echoing up the metal stairways till they seemed to fade away into infinity.'

In 1873 Marzials published a collection of poems entitled A Gallery of Pigeons (the British Library copy is at shelfmark 11646.d.64). The Athenaeum drolly reviewed it on 26 July 1873 as follows:

'we find that Mr Marzials dwells among marble columns, oleanders, rebecks, pleasances, large-lipped women, soft brown limbs, and lissome thighs, and that everything in his verses lounges or shimmers. Indeed, we fear that a general idea of lounging and shimmering is the only definite one that remains with us after reading The Gallery of Pigeons, and other Poems. For example, on one occasion –

All is a-grey, and the sky’s in a glimmer,
A glimmer as ever a sky should be;
Silvery grey with a silvery shimmer,
Where shimmers the sun in the hazes a-shimmer,
The shimmer of river, oh! river a-shimmer.

… [W]e must say that the repetition of the same word five times in three lines shows a certain want of familiarity with the language in which he writes. '

Another unimpressed reader of the book was Dante Gabriel Rossetti, a slight acquaintance of Marzials, who had been sent a copy as a gift by the poet William Bell Scott. Rossetti replied to Scott with an honest (negative) review, which unfortunately Scott forwarded straight to Marzials without reading it first.

The most famous of the poems 'A Tragedy', appears on pp.85-87 of A Gallery of Pigeons, and I’ve transcribed it for your enjoyment at the end of this blog post. 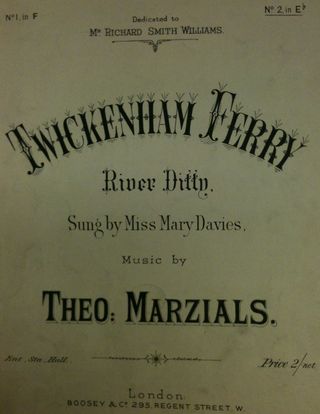 Marzials found more success with song writing, and in particular his 1878 song ‘Twickenham Ferry’ became very popular, with his income from sheet music sales far exceeding his British Museum salary. He suffered from ill-heath throughout his employment, and in that same year of 1878 was late for work 27 times, and off sick for 33 days (as noted by P R Harris in his A History of the British Museum Library). In December 1882 his doctor stated that Marzials’ work in the Museum was 'calculated to depress his vital and mental powers, and to deteriorate his health in a considerable degree'. He was pensioned off at £38 a year.

According to Gosse’s biographer, Ann Thwaite, Marzials eventually 'became addicted to Dr Collis Browne’s Chlorodyne and to boys'. Chlorodyne was a treatment for stomach and intestinal upsets, and contained chloroform, morphia, Indian hemp and prussic acid. After 1899 Marzials published no more songs or poems, and around that time retired to Devon, dying in 1920.

The more I read about Theo Marzials, the more endearingly eccentric he seems to me. I’ll leave you with the infamous poem, 'A Tragedy'. If you think you’ve found a better bad poem than this, the English and Drama department would love to hear about it. Leave us a comment.