Fifty Glorious Years! Doctor Who and the Invasion of Dusty Victorians

Doctor Who and Henry James are rarely mentioned in the same sentence. Now, admittedly there are many excellent reasons as to why that should be the case. The author of The Portrait of a Lady and The Wings of the Dove tended to move in rather different circles to those occupied by the splendid chap (all of them) who to this day travels through time and space in something that, on the outside at least, resembles a police box. I can't imagine, somehow, that James would have had too much time for alien invasions, time travel and mad scientists (let alone K9, the talking computer designed to look like a dog - a most un-Jamesian idea if ever there was one) but all the same, there is a link between the two and as Doctor Who celebrates its fiftieth anniversary perhaps now is as good a time as any to explore the debt the Doctor owes to Henry James, and indeed to a whole array of 19th- and 20th-century novelists. 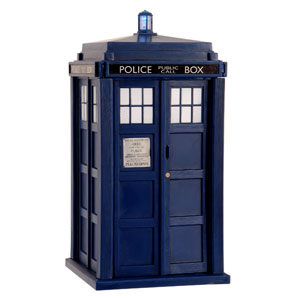 The TARDIS. There are probably dozens of Victorian novelists hiding behind it right now

Mary Whitehouse famously disagreed but the golden age of Doctor Who was often at its best when it doffed a cap to the great works of Gothic fiction. The Tom Baker era for example, when the programme's ratings were at their highest, rummaged cheerfully through assorted dark cupboards positively stuffed with literary Gothic horrors. The Brain of Morbius (1976) for instance was a variation on Mary Shelley's Frankenstein, complete with a brilliant but wayward scientist and a monster cobbled together from spare parts. The Talons of Weng-Chiang (1977) cheerfully mixed Gaston Leroux's The Phantom of the Opera with Sax Rohmer's Fu Manchu books while adding a dash of Sherlock Holmes. Tom Baker even wore a deerstalker in the story and the programme featured a giant rat (which, for all we know, may have had links with Sumatra - and if that means nothing to you then please read Arthur Conan Doyle's 'The Adventure of the Sussex Vampire' immediately). The Masque of Mandragora (1976) gave a cheery wink to Edgar Allan Poe's  'The Masque of the Red Death', even down to the macabre dance at the end while Planet of Evil (1975) reworked Robert Louis Stevenson's Strange Case of Dr Jekyll and Mr Hyde, and added a dash of antimatter misbehaviour for good measure. The Hand of Fear (1976) meanwhile borrowed from W.F. Harvey's story 'The Beast with Five Fingers'. It was all brilliantly Gothic stuff and to their credit the show's producers, directors, cast and script-writers took their ideas from the original novels and ran with them in dazzling and inventive new directions. Mary Whitehouse, rest her soul, may not have been punching the air with enthusiasm but the rest of the country lapped it up.

So where, you may ask, does Henry James fit into all this? Well, since its reboot in 2005 Doctor Who has continued to borrow from and reinvent classic tales of the supernatural. The Crimson Horror (2013), with its setting in Victorian Yorkshire and its weird, creepy red parasite comes across like the bizarre literary lovechild of Elizabeth Gaskell and Bram Stoker. Charles Dickens himself (well, sort of ...) appeared in The Unquiet Dead (2005) and the great man's A Christmas Carol loomed large behind the 2010 Christmas special titled ... umm ... A Christmas Carol (the literary heritage of that one was, admittedly, not obscure). The following year witnessed a bit of borrowing from C.S. Lewis for The Doctor, the Widow and the Wardrobe and then, best of all to my mind, we had the 2012 Christmas special - The Snowmen. Ah yes, now that's the one that owes a great deal to Henry James. 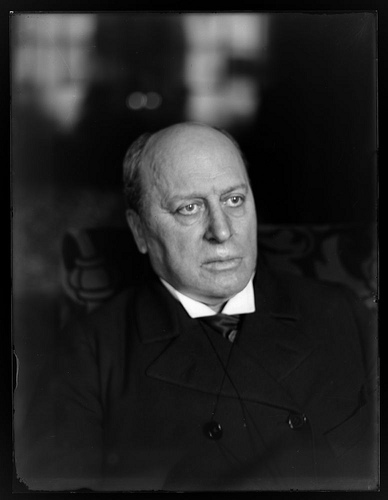 Henry James, perhaps pondering whether to introduce killer snowmen with sharp teeth into 'The Turn of the Screw'

Henry James's 1898 novella 'The Turn of the Screw' tells of a governess; her two wards - Flora and Miles - and the ghosts of her predecessors Peter Quint and Miss Jessel who, while they certainly exist within the governess's mind may not exist anywhere else. The parents of the children are both dead and their uncle, around whom the governess weaves romantic fancies, is remote and distant. In The Snowmen we have a governess (definitely one with a bit of mystery about her), looking after two children haunted by nightmares in which her predecessor returns from the dead. The children's mother is also dead and their father, in a neat 21st-century twist, weaves romantic notions around the governess ('Such wisdom in one so very, very pretty ... I mean young ...'). All of this, as with the Henry James novella, takes place in Victorian England in an isolated mansion. Then there are the murderous snowmen ... Okay, so these do not appear in the Henry James version but the nods and winks to the past continue. Matt Smith's Doctor even claims to be Sherlock Holmes at one point while the investigative trio of Madam Vastra, Jenny Flint and Strax owe more to Arthur Conan Doyle (as Richard E. Grant's character actually observes) than to Henry James. All of which goes to show how the influence of Victorian literature, and Gothic Victorian literature in particular, is frequently present throughout Doctor Who. To my mind the show is all the better for it so long may it last. Indeed, here's to the next 50 Gothic-flavoured glorious years.