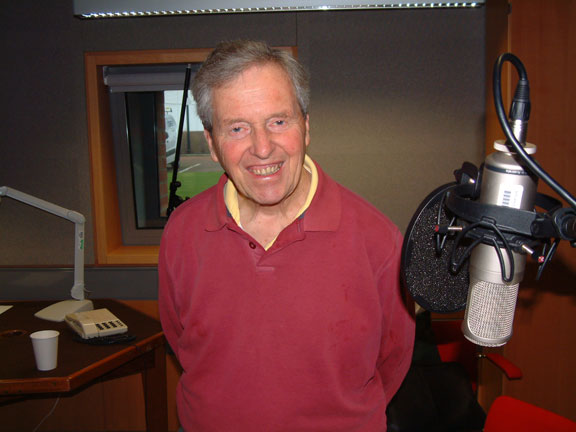 On Monday 16 December last year the British Library was pleased to welcome a distinguished visitor to its recording studio.

Trevor Eaton aka 'The Chaucer Man'  is widely known for his recordings of Beowulf in Anglo-Saxon and The Canterbury Tales in Middle English.

Over the course of a long career Trevor has introduced many thousands of school students to Chaucer, through more than 1000 live solo performances. A former university lecturer in Anglo-Saxon and Middle English, Trevor is also the author of several books on language and literature, and founder of both the Journal of Literary Semantics and the International Association of Literary Semantics.

Trevor visited the British Library studio to record, at his own suggestion, the few remaining passages of The Canterbury Tales he had not already recorded for Pearl Records. The Pearl Records sequence was originally issued as 17 tape cassettes (circa late-1980s) but omitted three of the linking passages and Chaucer’s Retraction.

It was a pleasure and a privilege to sit in with studio engineer Nigel Bewley in the control room, as beyond the glass Trevor brought the texts vividly to life.

Trevor is now thought to be the only person to have recorded The Canterbury Tales in its entirety.

In the first audio recording below, you can listen to Trevor explain the project and also hear his thoughts on correct Middle English pronunciation.

In this second recording, you can hear Chaucer's Retraction, performed by Trevor in the original Middle English.

Recordings are copyright  © The British Library Board, 2013.

The complete new recordings, plus all of the commercially issued cassettes, are available for listening at the British Library, although you may need to make an appointment.