Friends of Genius in Distress? 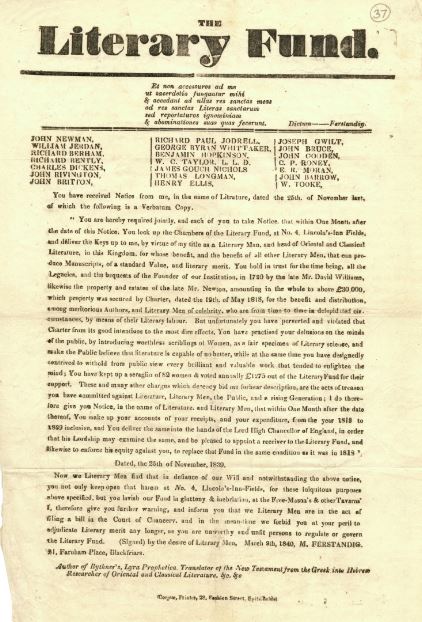 In March 1840, Matthew Ferstandig, the self-styled ‘head of Oriental and Classical Languages in the Kingdom’, flypostered the headquarters of the Literary Fund with a bill proclaiming that the Fund’s Committee had ‘perverted and violated’ their charter ‘by introducing the worthless scribblings of women as a fair specimen of literary science’ and ‘withhold[ing] from public view every brilliant and valuable work that tended to enlighten the mind.’  He went on to accuse the Committee of keeping up ‘a seraglio of 82 women’ and voting ‘1,275l out of the Literary Fund for their support’.

Sadly for the interest of this blog post, Ferstandig’s accusations were largely baseless.  His animus against the Literary Fund was principally due to his having applied on sixteen occasions without receiving a grant; he was not eligible because he had not produced the book-length publication required by the charter he accused the Committee of violating.

The Literary Fund (or Royal Literary Fund from 1842) was not a den of sin and vice, then, but rather a benevolent organisation established in 1790.  It was designed, in the words of an early newspaper advertisement, to ‘withdraw those apprehensions of extreme poverty, and those desponding views of futurity, which lead Genius and Talent from the path of Virtue’.  In practice, this meant providing applicants with confidential financial assistance if the Committee judged that their published works possessed ‘literary merit’. 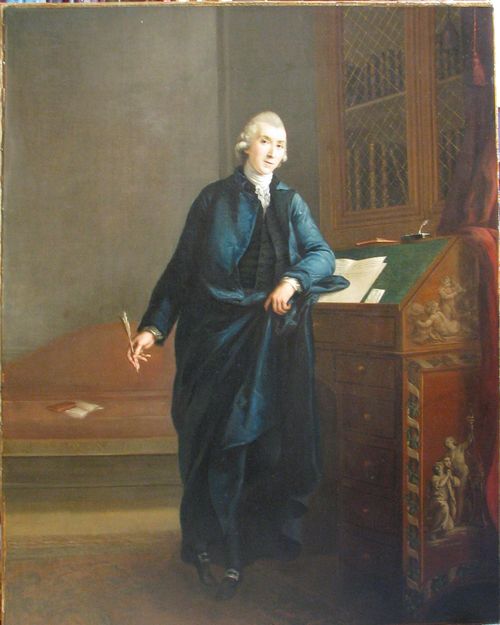 Thanks to a succession of punctilious secretaries, particularly the fabulously-named Octavian Blewitt and his immediate successor Arthur Llewelyn Roberts, the Fund’s archive is remarkably complete and comprehensive.  The most extensive parts are the case files, which detail the applications of over 3,600 authors who sought the Fund’s aid.  These include famous names like Samuel Taylor Coleridge, James Hogg, John Clare, Joseph Conrad, Ford Madox Ford, Bram Stoker, Edith Nesbit and D.H. Lawrence.  However, the Fund also received applications from hundreds of more obscure authors.  Letters from these figures often comprise unique sources of biographical information which provide valuable insights into the difficulties authors faced in making livings from their works.

An early example is Eliza Parsons (Loan 96 RLF 1/21), who wrote gothic novels for William Lane’s Minerva Press.  In 1792, she was struggling to provide for her family after seriously injuring herself.  ‘Still confined to my Room,’ she wrote, ‘my leg on a pillow, splinters of Bones continually working thro’ which keeps me in extreme tortures, I have been nevertheless obliged to struggle with pain and try to write.’   In 1797, she had to flee her residence to avoid her creditors and in 1802 she was imprisoned for debt.   As Parsons herself put it when expressing her gratitude for the Fund’s assistance, ‘the Illiberality of the world ridicules and contemns an Unfortunate poor Author.’

The Fund’s records also bear witness to the struggles faced by now-canonical authors.  James Joyce applied when he was required to leave Trieste for Zurich after the outbreak of the First World War (Loan 96 RLF 1/2990).  His application was supported by heavyweights including W.B. Yeats, Edmund Gosse and Ezra Pound.  Pound’s bullish letter to the Fund describes Joyce as ‘without exception the best of the younger prose writers’.  He details Joyce’s difficulties in getting published, writing that he had ‘lived for ten years in obscurity and poverty, that he might perfect his writing and be uninfluenced by commercial demands and standards.’  While Joyce may have lacked commercial recognition, then, he did not lack recognition from supportive peers or from the Fund, which made him a substantial grant.