In the very first Gothic novel, Horace Walpole's The Castle of Otranto (1764), a figure steps down from a painting and enters the action, instigating an enduring trend for portraits in Gothic novels to behave rather strangely. In Melmoth the Wanderer (1820), for example, written by Oscar Wilde's great uncle Charles Maturin, the eyes in a particular portrait appear to follow one of the characters around a room. Nathaniel Hawthorne's The House of The Seven Gables (1851) contains a portrait that hides - quite literally - a family secret while Edgar Allan Poe's 'The Oval Portrait' (1842) features a model who becomes increasingly pale and still while her portrait blossoms with a lifelike radiance. Sensation fiction, which reached its peak in the 1860s joined in the pictorial mayhem - Mary Elizabeth Braddon's novel Lady Audley's Secret (1862) features a painting of the dazzling - and deadly - Lucy Graham with her lips twisted into a sneer; something the artist has unconsciously sensed rather than seen in Lucy's flawless beauty. Even poetry features the occasional disturbing portrait-related incident. In Christina Rossetti's 'In an Artist's Studio' the artist obsessively pores over the face of his model, gazing at her with an almost vampire-like intensity; something which leads to one of the most disturbing lines in all of Victorian poetry -  'He feeds upon her face by day and night'.

Then, of course, there is Oscar Wilde's The Picture of Dorian Gray, a novel about a painting that bears the weight of its subject's debauchery and has to be hidden away from prying eyes. 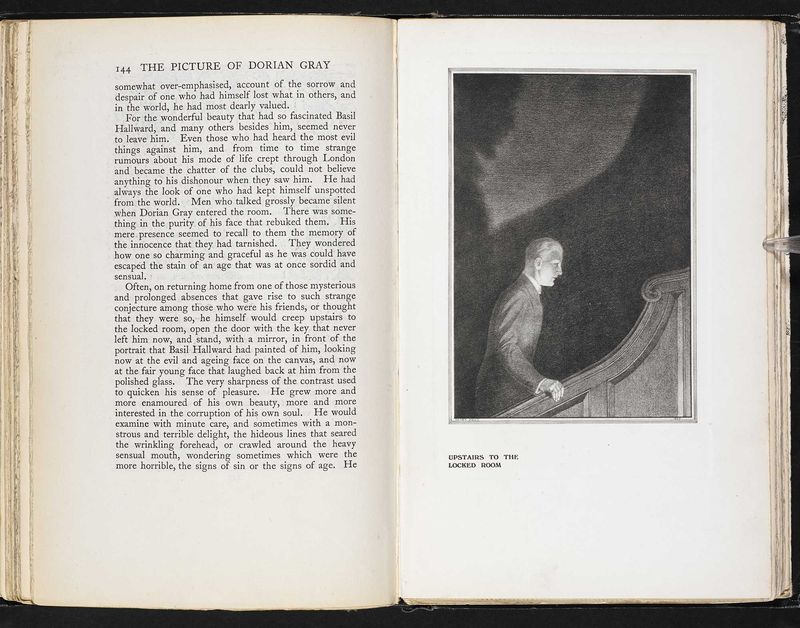 (Above: Dorian Gray on his way to view the latest indications of disgraceful behaviour as manifested on the painting in his attic. Taken from a 1925 edition of the novel illustrated by Harry Keen)

The British Library's new Discovering Literature website features a wealth of material on both Oscar Wilde and The Picture of Dorian Gray, as well as articles on  Aestheticism and Decadence - schools of thought and ways of life that came to define so much of Wilde's work. The Picture of Dorian Gray, rather like Robert Louis Stevenson's slightly earlier novella Strange Case of Dr Jekyll and Mr Hyde (1886) is a tale that reveals a great deal about the age in which it was written.

Many Victorians believed that sinful and shameful acts left a visible record upon the faces of those guilty of such activities. Dorian's ability to indulge every vice he dares to imagine while remaining forever youthful and unblemished frees him from suspicion. His soul may rot, in the form of the sodden and unclean painting, but he himself can maintain his position in society without so much as a single blemish on his visible character. This ability to lead a double life - respectable on the surface but disgraceful in private - was a notion that troubled many in Victorian society. What if politicians, clergymen, scientists and so on - so morally upstanding and  respectable when judged by their day-to-day appearances - were monsters of depravity behind their front doors? It was a terrifying idea, and one that came back to haunt Wilde himself. 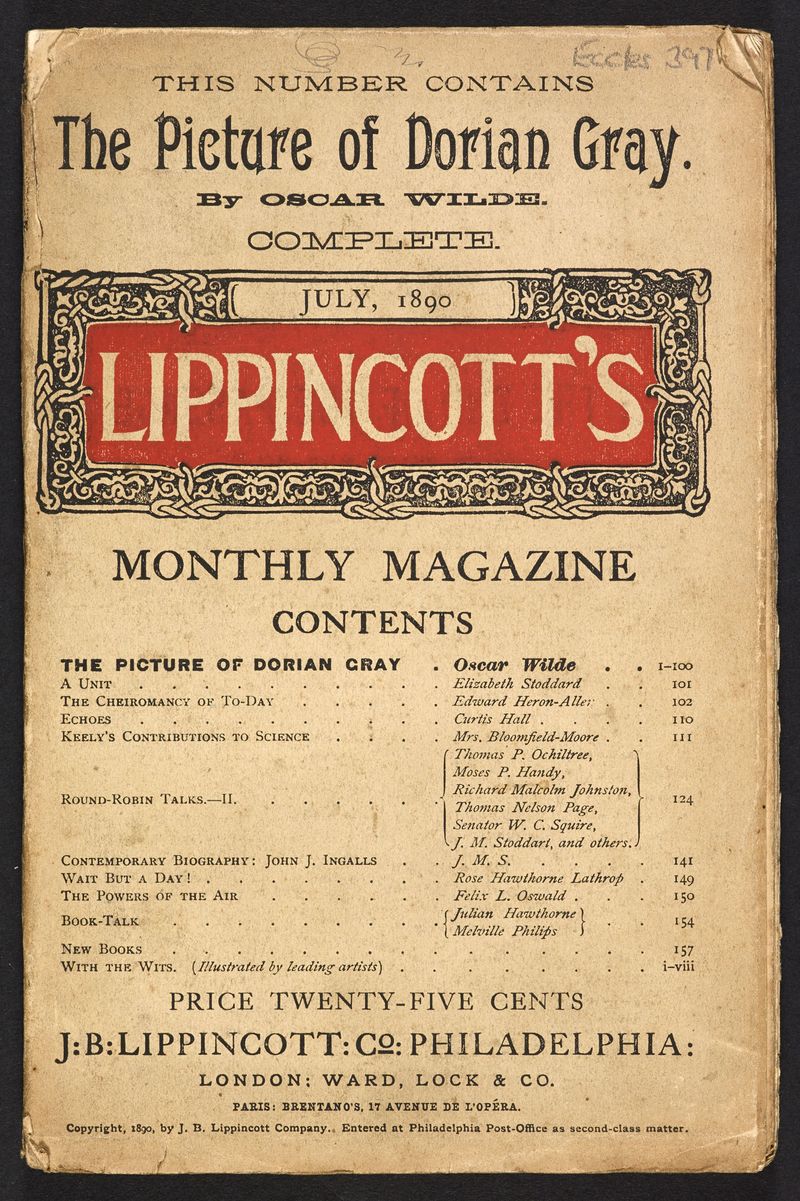 (Above: Lippincott's Monthly Magazine for July 1890, the first appearance in print of The Picture of Dorian Gray)

When The Picture of Dorian Gray first appeared in Lippincott's Monthly Magazine reviews were harsh. The story was described as 'effeminate', 'unmanly' and - most damningly of all in the opinion of the British press - openly French in its aesthetic. Nothing, in late-Victorian conservative opinion, reeked quite so potently of filthy decadent practices as French literature. The yellow book, given to Dorian by his friend Lord Henry and which aids in his corruption is usually thought to be Against Nature, a novel first published in 1884 by the French author Joris-Karl Huysmans depicting the activities of a dissolute aristocrat, Des Esseintes. At one point Des Esseintes encrusts jewels onto the surface of a tortoise's shell so he can watch the dazzling rays of reflected light as the creature crawls across his carpets.  Des Esseintes, with his desire for perverse private pleasures was, whatever else, certainly not a prime example of healthy behaviour. No wonder, then, that the Scots Observer review of Dorian Gray denounced the book as fit 'for none but outlawed noblemen and perverted telegraph boys', a reference to a homosexual brothel recently raided by the police on London's Cleveland Street. 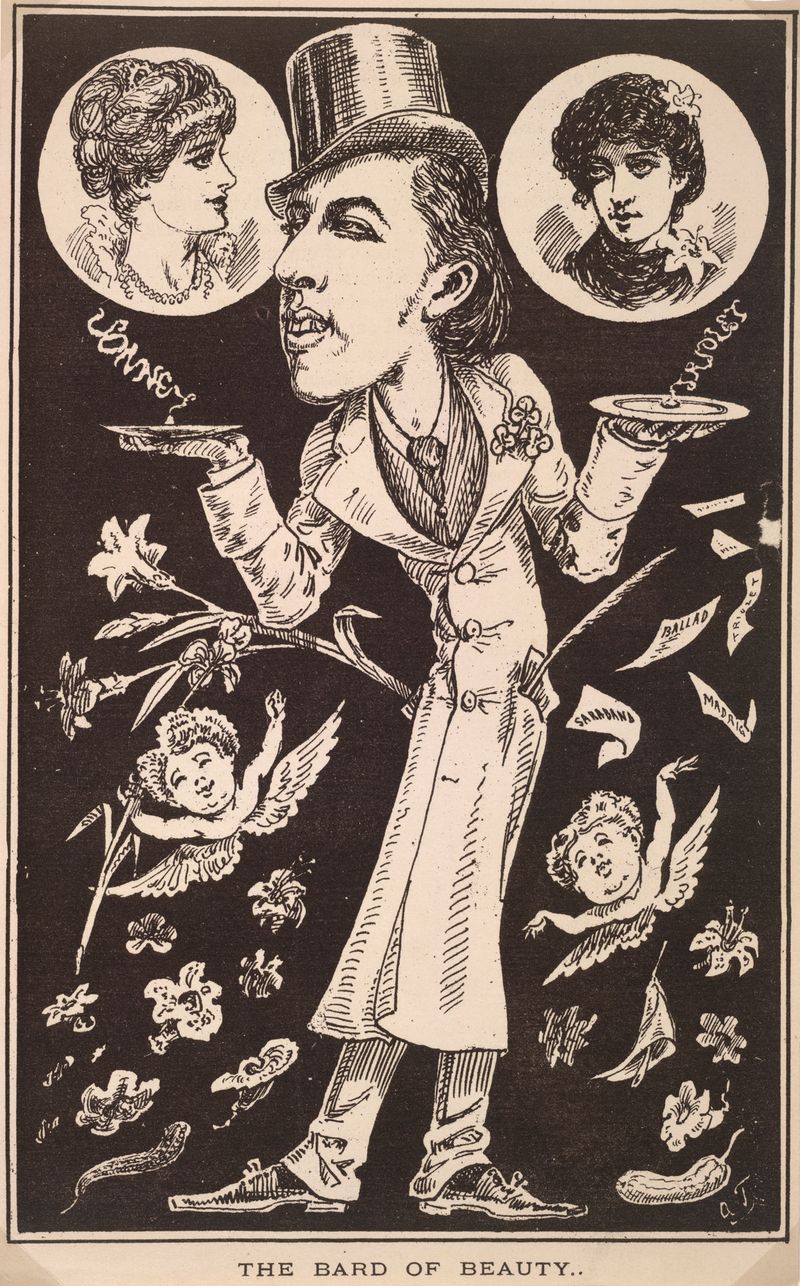 (Above: The Bard of Beauty, by Alfred Thompson. Time Magazine, 1880)

Oscar Wilde played up, and played up brilliantly, to the idea of 'art for art's sake'. In an early cartoon The Bard of Beauty, which appeared ten years before the publication of Dorian Gray, Wilde was caricatured as being every inch the dandy. When scandal caught up with him in the form of allegations about his private life Wilde's novel The Picture of Dorian Gray, and especially its first incarnation as published in Lippincott's, was used in evidence against him. Just as Dorian's portrait revealed the real nature of the man then so was Oscar Wilde's brilliant but troubling novel regarded by prosecuting counsel as revealing the true nature of its creator. Wilde's preface to the book, which included the lines - 'There is no such thing as a moral or an immoral book. Books are well written, or badly written. That is all'  - sadly cut no ice.

Art and the artist remain, for good or ill, two sides of the same coin in the eyes of many.