In the run up to the centenary commemorations of the outbreak of the First World War the British Library has been involved in a number of projects including collaboration in a Europe wide initiative, Europeana. This project covered a range of activities one of which was the digitisation of thousands of books and documents.  Part of my involvement with the project was to put forward literary works to be digitised.  One book that had a particular impact on me was The Diary of a Dead Officer: Being the Posthumous Papers of Arthur Graeme West.  This slim volume comprises diary extracts written between 1915 and 1917 and a selection of West’s poems. 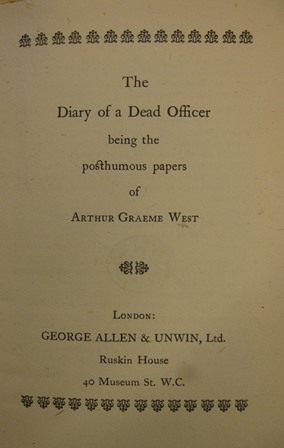 The Diary of a Dead Officer. British Library shelfmark 010856.de.16

The Diary was published posthumously in 1919 shortly after the end of the war and was edited by the pacifist campaigner C E M Joad who had been a friend of West’s since schooldays.  The Diary charts West’s growing sense of disillusionment as the reality of war takes its toll.  West had initially tried to obtain a commission in 1914 but had been turned down because of poor eyesight.  Undeterred, he enlisted as a private in the Public Schools Battalion in February 1915.  However, faced with the realities of army life and the way the war was being conducted, his sense of duty and patriotism gradually turned to disenchantment.  In 1916, after serving in France for several months, West was sent to Scotland for officer training, a period when West’s disillusionment reached crisis point.  Many of the instructors were soldiers who had not experienced life at the front making it difficult for them to gain the respect of the officer cadets who had served in the front line.  West felt that the training he received was ineffectual for the conditions faced in the trenches and at times he felt it bordered on the farcical.  During this period he became increasingly influenced by the writings of Bertrand Russell and the pacifist arguments of his friend Joad to the point where he decided he would write to his Commanding Officer resigning his commission and refusing to take any further part in the war.  In the end, West couldn’t bring himself to deliver the letter and reported for duty as instructed.  He went back to France in September 1916 on active service with the Oxfordshire and Buckinghamshire light infantry and was killed by a sniper on 3 April 1917.

Along with the diary excerpts is a selection of West’s poetry.  The poetry section opens with ‘God! How I hate you, you young cheerful men!’ West’s angry reaction to the patriotic poetry of those idealistic young men who believed they were living through “epic days”.  The most well-known of West’s poems is ‘The Night Patrol’ a powerful and honest account of the atrocious conditions and horrific experiences endured by those living in the trenches and one of the first realistic war poems to be published.

Last year I was delighted to learn that the Old Stile Press were to publish a fine press edition of West’s work to commemorate the 1914 centenary.   This new publication, in a limited edition of 150 copies, contains newly commissioned linocut illustrations by the artist and print-maker John Abell who also provides an afterword.  The Illustrations, several of which are full-page, reinforce the sense of horror and outrage found in West’s narrative. The black and white images create a striking and haunting impression.  Hand printed by Nicolas McDowall this edition is a fitting tribute to West.  For more information about the creation of this work please see the Old Stile Press blog.

West’s frank and powerful writings deserve to be more widely known.  I hope the interest generated by the centenary of the First World War and publications such as the one from the Old Stile Press will go some way to helping his work reach a wider readership.

The Old Stile Press edition of The Diary of a Dead Officer is now available to consult in the Library’s Rare Books and Music Reading Room, shelfmark RF.2014.b.25.