Autumn ushers in chill winds, falling leaves and lengthening shadows. Mornings and evenings are darker, mists become heavier, spiders scuttle from dark corners and carved pumpkins appear in windows as Halloween looms. All of which makes it the perfect time of year to talk about ghosts and vampires and things that go ARRRRRGH in the night. 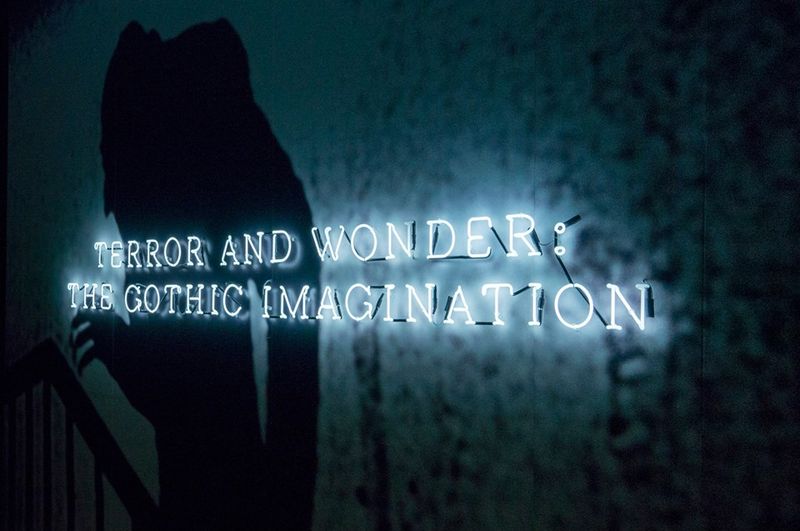 (Above: The entrance to Terror and Wonder: The Gothic Imagination. Photo by Tony Antoniou)

Where better to start when it comes to discussing autumnal shivers than the British Library's major new exhibition, Terror and Wonder: The Gothic Imagination. The exhibition explores two hundred and fifty years of Gothic literature, beginning with Horace Walpole's The Castle of Otranto and running through to the present day. The show provides plenty of insight into novels such as The Mysteries of Udolpho, Frankenstein, Northanger Abbey, Dracula and Rebecca but it also explores, among many other themes, the use of Gothic imagery by authors such as Charles Dickens and the Brontës; our fascination with hauntings; the rise of Gothic literature for children and the macabre appeal of the zombie as the monster of choice in the late 20th century. The exhibition also examines the influence of Gothic literature in other fields including fashion, music, art, architecture and, crucially, film.

Gothic literature and film owe a great deal to one another. The second most frequently portrayed fictional character in film and on television is Count Dracula (the most frequently portrayed is Sherlock Holmes - and given the nature of stories such as The Hound of the Baskervilles and 'The Speckled Band' there is also a considerable amount of Gothic associated with Baker Street's finest). Max Schreck's shadow gliding up the stairs in Nosferatu (1922) provides one of cinema's defining moments; just as Christopher Lee's first appearance as Count Dracula in 1958 altered our mental image of Bram Stoker's creation for ever, changing him from the decayed aristocrat of the novel into a suave and imposing individual possessed of considerable charm. Subsequent adaptations of Dracula have continued the trend for reinventing the Count, portraying him as something akin to a romantic hero, as in Frank Langella's performance from 1979, or as a conflicted but noble figure effectively contracting a deal with the devil in order to save his people as in Dracula Untold, released in 2014. (Above: Another iconic portrayal of the Count, this time by Bela Lugosi, seen here with a vampire slaying kit from the Terror and Wonder: The Gothic Imagination exhibition. Photo byTony Antoniou)

Indeed Count Dracula provides a particularly striking example of how cinema adapts characters from Gothic fiction and reflects them back in new forms to highlight changing tastes and attitudes. One film company, Hammer Films, made several movies featuring Bram Stoker's immortal creation and each portrayed the Count in a different fashion. Hammer's first adaptation, Dracula (1958), played fairly freely with the source material, placing the action entirely in a somewhat vaguely defined mittel-Europe of forests, huts and taverns where the locals all go very quiet as soon as the newly-arrived stranger asks for directions to the castle. Certain characters, such as the fly-eating lunatic Renfield were removed altogether while the Count, played by Christopher Lee, is a model of charm, elegance and icy menace. He is also a curiously shadowy figure - dominating the film and yet only speaking thirteen lines of dialogue throughout. The critics were sniffy - with the reviewer in the Daily Worker claiming 'I came away revolted and outraged' - which highlights another common theme: Gothic has never been entirely respectable. It has always been too dark, too transgressive and too challenging to ever find a comfortable home within the realm of the drearily acceptable. 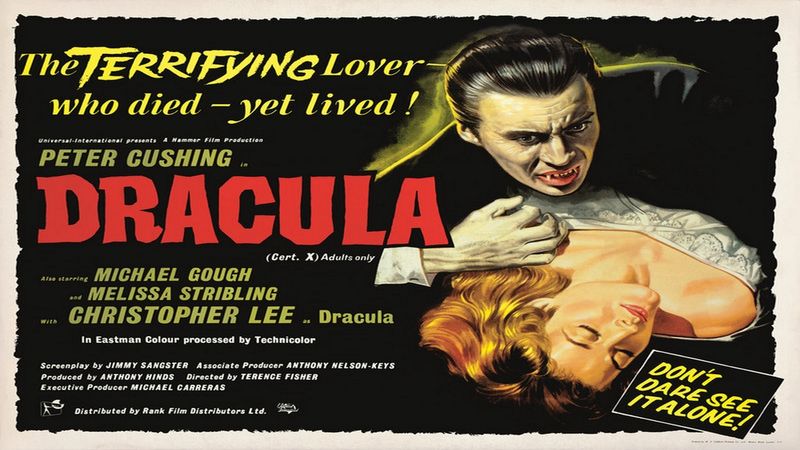 Subsequent Hammer films moved the Count away from his East European roots. Taste the Blood of Dracula (1970) placed the Count in fin-de-siècle England, and set him against three debauched and hypocritical members of 'respectable' society. In this scenario the Count actually becomes something of a sympathetic character for a younger generation reacting against the staid traditions and restraints imposed upon them by their parents. In Dracula A.D. 1972 the Count prowled through contemporary London, turning the thrill-seeking hippies who haunted its more colourful locations to the dark side. The Count and decadence do seem to go together - somehow he is at home amongst the dandies and the aesthetes and those on the margins of society whether they date from the 1890s or the 1970s.

Like all of the best villains you can't keep the Count down. Dracula continues to stalk our television shows and cinema screens, not to mention our imaginations. He really is a monster for all times and seasons. A nightmare for all ages and places. Happy screaming.

Learn more about Gothic literature on our Discovering Literature website while the Events programme for Terror and Wonder can be found here. Enjoy, and please don't have nightmares.