October 2014 marks the 80th anniversary of the publication of George Orwell’s first novel Burmese Days. The novel draws heavily on his experiences while serving in the Indian Imperial Police in Burma from 1922 to 1927, an important period in his formative political development. As with many first novels, publication was far from straightforward. Although Burmese Days was his first novel, it was not his first book. In 1933, Gollancz had published Down and out in Paris and London, Owell’s account of living in poverty which was notable, for among other things, as the first publication to appear under his pseudonym, George Orwell. He had previously published articles and reviews under his real name of Eric Blair. Orwell’s life-long literary agent Leonard Moore had placed Down and out in Paris and London with Victor Gollancz knowing the publisher would be sympathetic to the tenor of the book. It followed then, that Gollancz would be the obvious choice to publish Orwell’s first novel. However, Victor Gollancz was reluctant to publish Burmese Days because he feared publication would provoke legal actions of libel and deformation from colonial administrators. Victor Gollancz’s publishing concern was a relatively recent venture and he was naturally cautious knowing that an ill-advised publication resulting in legal proceedings could easily ruin his company. Reluctantly, he turned down the book as did the publishers Heinemann, and Jonathan Cape for the same reasons. 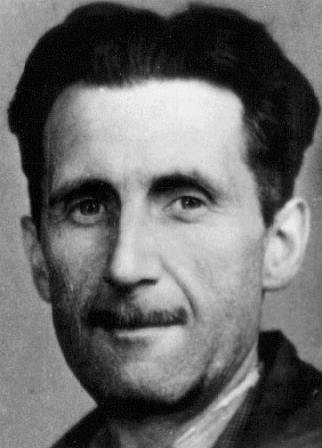 Orwell then had a stroke of luck. Eugene Saxton, the chief editor at American publishers Harper & Brothers, was visiting London and Moore managed to arrange for him to meet Orwell. Fortunately for Orwell, Saxton agreed to publish the novel after requesting a few minor changes. So, somewhat unusually for an English author, Orwell’s first novel was first published in American rather than Britain on the 25 October 1934 in an edition of 2,000 copies. This was followed two months later by a second printing in December. Being an American publication, the novel was not liable for legal deposit therefore the British Museum Library (as the British Library was then known) did not receive a copy. Perhaps we can assume that Orwell was aware of this because on the 11 December 1934 he presented an inscribed copy of the second printing to the Museum. 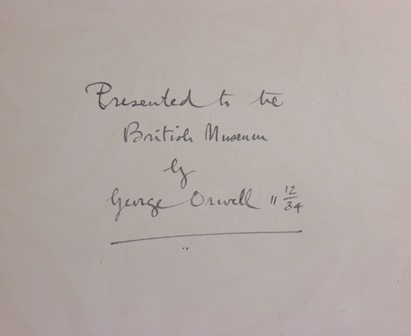 In the meantime Victor Gollancz had been following the reception of the book with interest and when a rush of libel suits didn’t materialise reconsidered publishing the novel in Britain. However, cautious as ever, he insisted on a number of changes. He asked Orwell to check official directories to ensure that the names he’d used in the novel were not those of serving colonial officials. He also asked for references to Upper Burma to be changed to the less specific province of Burma. Orwell reluctantly agreed to the changes. Among the names he changed were; Dr Veraswami to Dr Murkaswami, the Lakersteens became the Latimers, and the Sub-divisional Magistrate, U Po Kyin became U Po Sing. The British edition also contained an author’s note stressing that all the characters in the book were entirely fictitious. The first British edition was published on 24 June 1935 in an edition of 2,500. The Library’s copy of the first British edition is held at shelfmark NN.24091. Later Orwell was to refer to the first British edition of Burmese Days as “garbled”. When the first Penguin edition was being prepared in the mid-1940s, Orwell insisted that the American edition should be followed which reverted back to the original names and this has now become the standard English text.