'Think only this': war poets witnessing a century of war at the British Library

It has become a truism to say that the First World War was ‘a poet’s war’.

If this easy declaration risks covering up the work of poets from later wars (yes: there were poets in the Second World War!), it remains very much the case that we continue to try to understand the experiences and consequences of the First World War through its poets. Indeed, it’s interesting that the concept of a ‘war poet’ appears to be a particularly British phenomenon, and one that dates from Owen, Sassoon, and other combatants of the 14-18 conflict. Of course other belligerent countries during the First World War had poets who wrote for or against the hostilities…but the collective term ‘war poet’ (as opposed to individual poets who write about the war) is not so easily translated into other languages or literary cultures.

Our new First World War One learning site features an excellent essay by Dr Santanu Das, who reminds us that First World War poetry is more than the trench poets that we perhaps first think of when we hear the word ‘war poet’, and stretched beyond traditional poetry collections to bleed (literally, it feels) into all walks of life: posters, post-cards, speeches…to  novels, films, and (of course) Blackadder.

It seems to me that haunting all consideration of war poetry is Rupert Brooke’s ‘The Soldier’. As Das writes, when on Easter Sunday 1915, Dean Inge read out ‘The Soldier’ from the pulpit at St Paul’s Cathedral, ‘he was at once creating and anointing a secular saint: the ‘poet soldier’’.

The opening salvo of the poem reminds us of the inevitable awareness of death that accompanies the desire of all war poets to both witness--and to frame--later understanding of what they have observed; Owen later developed the idea: ‘All a poet can do today is warn’. 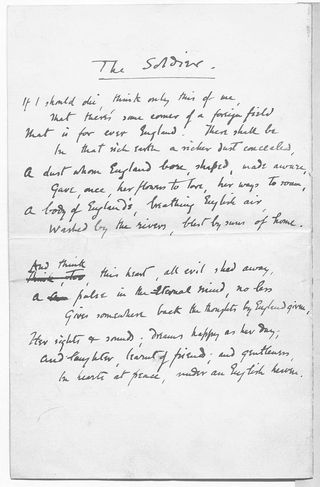 This handwritten copy of the poem (see here for associated rights) was written by Brooke for Edward Marsh, who was an early critic of Brooke’s poetry and the editor of the anthology, Georgian Poetry, published in 1912. Marsh donated it to the Library at the British Museum in 1915. He explains in a letter accompanying his donation that the poems were written when Brooke was staying with him in January 1915 three months before his death of septicemia at Skyros in Greece. Marsh writes that the poems are ‘one of my most precious possessions’ which he can hardly bear to part with but for the fact that he thinks that they should become part of the Library’s collections.

This Friday 10 October, poet and writer Owen Sheers—whose own recent verse drama, Pink Mist, was  about soldiers serving in Afghanistan and the families who are left behind—will introduce an evening of a hundred years of war poetry with two guests: former Poet Laureate Sir Andrew Motion, and poet and writer Sabrina Mahfouz. From Owen and Sassoon to today’s conflicts, they will consider how the poetry of conflict has influenced their own work, and read from poets both known and forgotten of conflicts from across the world that have scarred our past century since the War to end all Wars ended in 1918. For more information about the event, see the British Library’s event pages; and to see Sir Andrew Motion read from the work of Wilfred Owen see here.