In the British Museum collection there is a print dated 18 June 1782, showing two women driving a vehicle in front of a cosmetic shop. The vehicle is a gig, raised absurdly high on springs, so that the seats are poised above the height of the four horses pulling it. A monogram on the side shows the letter A, indicating that the lady driving is Lady Archer, the famous beauty (though hers was a beauty famously achieved with much artificial aid). The caption below states: The Portland Place A-R. Driving without a beau to R-D’s perfume warehouse P-LL M-LL 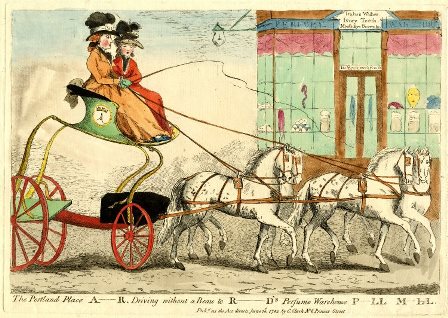 © The Trustees of the British Museum

The cosmetic shop has an improbably large bow window, curling round the corner of the building, and notices above the door advertise some of the products on sale within: Italian washes, Ivory teeth, Mouse Eye Brows etc and the Best French Roush.

It is widely supposed that during two or three periods of the eighteenth century, women satisfied the demands of fashion for high and thick eyebrows by shaving off their own and replacing them with false eyebrows made from mouse-skin. It’s an uncomfortable idea, but reasonably creditable within the context of other cosmetic and medical products of the time. However, the evidence for the practice is thin, and very specific in its nature. Apart from this cartoon the evidence is largely satirical poems, by Matthew Prior, Jonathan Swift, and an anonymous poem printed in the London Daily Post on 19 June 1736, containing the lines:

Or Nightly Traps insidious lay,
To catch new Eye-brows for the Day

The relevant poem by Matthew Prior, dated 1718, runs:

For this misfortune careless Jane,
Assure yourself, was loudly rated
And madam, getting up again,
With her own hand the mouse-trap baited.

On little things, as sages write,
Depends our human joy or sorrows
If we don’t catch a mouse to-night,
Alas! no eyebrows for to-morrow.

This is one of a series of mostly misogynistic poems that show women using false eyebrows, and false eyes, to retain their attractiveness in the face of increasing years. It dates from 1718, a few years after Richard Steele’s The Tender Husband (1707), which has a reference to false eyebrows:

Mrs Clerimont: … Oh bless me Jenny, I am so plane, I am afraid of myself – I have not laid on half red enough – what a dogh-baked thing I was before I improved myself, and travelled for beauty – however, my face is prettily designed to day.

Fainlove: Indeed, madam you begin to have so fine an hand, that you are younger every day than other.

Mrs Clerimont: The Ladies abroad used to call me Mrs Titian, I was so famous for my colouring; but prethee. Wench, bring me my black eye-brows out of the next room.

Jenny: Madam, I have them in my hand.

Fainlove: It would be happy for all that are to see you today, if you could change your eyes too.

Mrs Clerimont: Gallant enough – no hang it, I’ll wear these I have on …

Black eyebrows, not mouse-coloured – though ‘mouse’ and ‘mousey’ as terms for the colour date from much later. Not that we should necessarily expect the material of manufacture to be specified here, but it seems likely that in this passage, in which Mrs Clerimont’s use of cosmetic eyebrows is being highlighted, the opportunity of a satirical reference to the source of the items would be taken up.

Her eyebrows from a mouse’s hide
Stuck on with art on either side,
Pulls off with care, and first displays ‘em,
Then in a play-books smoothly lays ‘em.

Corinna, Swift’s ‘nymph’, evidently takes great care of her false eye-brows, which are protected from attack during the night by vermin, unlike her plaster and hair-piece. The poem does not spare Corinna at all – she has a ‘crystal eye’, false teeth, a wig infested with fleas, ‘flabby dugs’, and plumpers – lumps of cork kept in the mouth to fill out the cheeks after rotten teeth had been removed. For all of the cosmetic aids, other than the eyebrows, there is ample evidence, including evidence of how they were made. Note also the reference to where the eye-brows are kept – a ‘play-book’, indicating that Corinna was an actress, who might be expected to wear larger than life make-up accessories.

Lack of evidence is of course nothing more than lack of evidence; but at the time of the cartoon of 1782 there were several books available that gave details of how to dress false hair – The Art of Hair-dressing, and Making it Grow Fast, 1750, by William Moore; A Treatise on the Hair, 1770, by David Ritchie; Palacocosmos, or the Whole Art of Hairdressing, 1782. In comparison with what we know about how wigs were constructed, powdered and coloured, how beards were dyed, and the huge number of recipes for preventing or encouraging hair growth, not to mention how to prepare other facial cosmetics, the absence of information on how to prepare, style, fix and preserve mouse-skin eyebrows is noteworthy.

This does pose the question – to what extent should we rely on satirical literature for documentary evidence of social history? When Prior’s Helen, in another poem, reproaches her maid Jenny for losing her box of false eyebrows, and claims:

I can behold no mortal now,
For what’s an eye without a brow?

We know that this is hyperbole and an accurate reflection on how many people feel about themselves without the aid of cosmetics.

Swift’s Gulliver’s Travels is tipped beyond the realm of reality, but retains enough reality in it to create an ambiguity; the tone of the narration, the details of documentation, and the way these details are bound into the narrative give an air of authenticity . We know there is something believable in the highly fanciful tale – an ambiguity which Swift clearly enjoyed: witness the apparent glee with which he told Pope of ‘a Bishop [who] said, that Book was full of improbable lies, and for his part, he hardly believed a word of it.

Satire, to work, has to be close to the truth; it goes beyond the boundary of truth, and in doing so, in defining that boundary, it tells us what is truth. Satire indicates what people thought, and how notable details make something recognisable. Corinna’s crystal eye (did so many women lose their eyes?) is an easy target and is focused on, just as was Richard Nixon’s nose and Margaret Thatcher’s handbag; but in the absence of other documentation how much can we rely on it as actual evidence of social history?

Julian's latest book, The Finishing Touch: Cosmetics through the Ages is published by the British Library (hardback £10, ISBN 978 0 7123 5752 4) and is available from bookshops now, including shop.bl.uk/

The 'carriage' is not a gig which are two wheelers...this is a high perch phaeton...google and you will see loads of similar images.