"Terror ... and the Supernatural": Stanley Kubrick's Gothic Adaptation of The Shining

Stanley Kubrick's The Shining is one of the most recognisable works on display in the Terror and Wonder exhibition so we decided to ask Catriona McAvoy to explain its Gothic credentials. Catriona is a writer and filmmaker from London whose research into the films and working practices of Stanley Kubrick began with her Masters degree in 2009. Since then she has presented her findings at several international conferences and in discussion panels. Her forthcoming publications include chapters in Stanley Kubrick: New Perspectives (Black Dog Publishing, 2015) and in Studies in the Horror Film: Stanly Kubrick's The Shining Vol. 1 & 2 (Centipede Press, 2015). More information about her research can be found at kubrickism.com.

The Shining is a film steeped in the Gothic tradition. Stephen King's book makes reference to Gothic literature and Stanley Kubrick approached the adaptation with this in mind. He recruited the author Diane Johnson to co-write the screenplay with him. He had read her modern Gothic novel The Shadow Knows (1974) and she taught a course on Gothic literature at the University of California, making her in Kubrick's opinion "the ideal collaborator".1 They discussed psychoanalysis and a wide range of literature, reading and recommending many books to each other in order to weave deeper themes into the fabric of the film.

The British Library's Gothic exhibition traces the same rich literary history that Kubrick and Johnson explored. Connections can be made between some of the exhibits and the evidence of the Gothic influences on The Shining found in The Stanley Kubrick Archive, The Diane Johnson Archive and from an interview I carried out with Diane Johnson. The exhibition displays some fascinating items from the production of The Shining including photographs and a note from Kubrick listing the 'Manifestations of a Haunted House'. Also displayed is the scrapbook prop which featured heavily in early drafts of the film (several scenes featuring it were shot but they were eventually edited out, leaving it appearing only once). However, it is not just in this section of the exhibition that we find the ghosts of The Shining. We can retrace our steps through the maze of meaning in Kubrick's film using some of the exhibits to guide us. 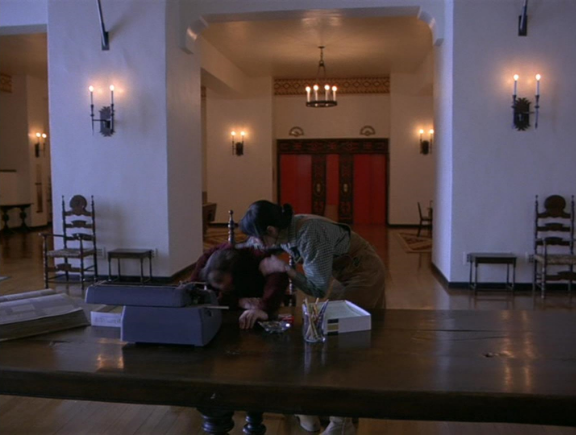 Jack awakes from his nightmare, the scrapbook can be seen beside him on the desk (The Shining, 1980)

In the first room of the exhibition Shakespeare's work is highlighted as an inspiration for Gothic writers. His ghosts and supernatural happenings have certainly haunted the genre but his influence goes further than this. The externalization of inner turmoil is a common theme of the Gothic that is present in Shakespeare's work; think of Lady Macbeth who could not wash the blood from her hands. In Kubrick's development notes on The Shining "shades of Throne of Blood" is written beside an idea for a dramatic scene with Danny and Jack.3 Throne of Blood (1957) was Akira Kurosawa's brilliant adaptation of Macbeth and this is one of the few film references noted in The Shining development. Shakespeare again appears in a note from Diane Johnson. She is considering the balance of the narrative and the motivation of the characters and has written: "Tragedy or Fairytale? Lear - Tom Thumb. Moment of choice for Jack - Danny saves everyone."4 Diane Johnson explained the connection with The Shining and the story of King Lear to me as related to tragedy and the perils of "over-reaching ambition."5

Continuing through the exhibition the work of Ann Radcliffe provides the next link to The Shining. Her novel The Mysteries of Udolpho (1794) is a defining Gothic tale from this period. One of the key features of her writing is the evocative description of landscapes. Gothic literature often uses landscape and the sublime to inspire terror and awe; dark forests, remote mountains and precarious paths leading to gloomy castles. Johnson recalls discussing the work of Ann Radcliffe with Kubrick during their research. In the dramatic opening sequence of the film we are taken on an aerial journey following Jack Torrance (Jack Nicholson) as he drives through a Gothic landscape of forests and mountains to the remote and haunted Overlook Hotel. Later in the film as the family make the journey together Jack relishes telling them the story of the Donner party, early settlers who got stranded in the hills and resorted to cannibalism in order to survive: ferocious nature turning man to beast. 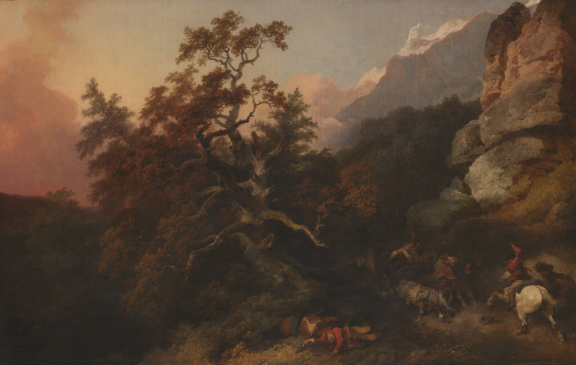 Matthew Lewis's novel The Monk (1796) provides the next clue to the secrets of The Shining. Amongst the book's supernatural happenings the main protagonist falls into a dream trance and rapes a young woman. Sleepwalking was a key theme in King's book and also appeared in Johnson's novel. In the film Jack is seen having a terrible nightmare at his desk and is drawn into the hotel's ballroom and to the mysterious room 237 in a dreamlike state. Johnson relates The Monk's psychological and supernatural themes to the narrative of The Shining. Jack's pursuit of pleasure at the expense of others is his downfall, mirroring the fate of the monk, Ambrosio, in Lewis's book. The exhibition displays the edited third edition open on a page where we see Lewis had to remove an enthusiastic description of a young woman's bare breast for a milder fourth edition. Interestingly almost 200 years later Kubrick had to blur out the breasts of the naked woman in the 237 bathtub scene for censors in several countries. 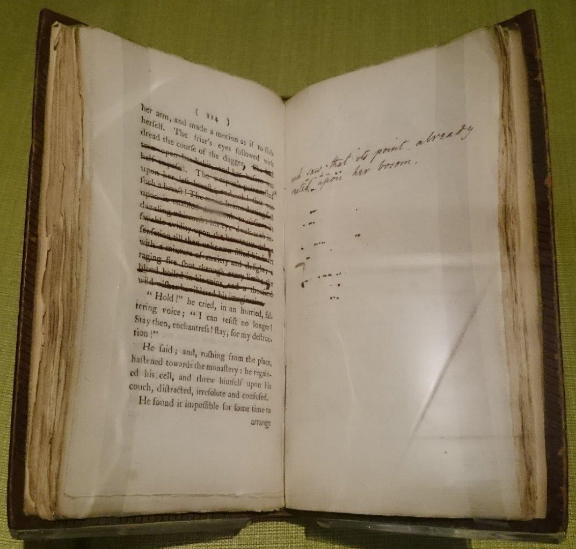 The manuscript of Frankenstein (1818) handwritten by Mary Shelley and annotated by Percy Shelley is a fascinating part of the exhibition. Displayed is the section where Frankenstein comes face to face with the monster in the mountains. Again here we see an evocative description of an unforgiving landscape, relating back to Ann Radcliffe's work and linking us to the setting of the Overlook Hotel. More importantly we find Frankenstein confronting the monster that he created, perhaps the monster within. This duality is a theme throughout Kubrick's film; mirrors are frequently used to show the two sides of Jack and of the Overlook. Jack's inner turmoil and ultimate unleashing of his monstrous side provides us with the true horror of the film and of man's dark side. Johnson remembers discussing Frankenstein with Kubrick during the development of the screenplay. King perhaps also had this character in mind as he describes Frankenstein's monster in his non-fiction book Danse Macabre (1981) as "The Thing Without a Name", an archetype for numerous horrific creations. 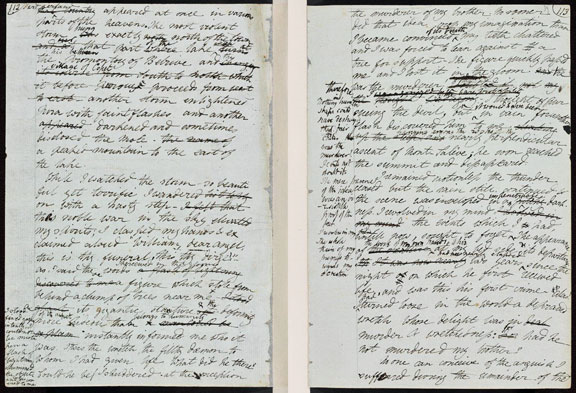 The manuscript of Frankenstein. Mary Shelley, annotated by Percy Shelley (1816)

The Brontës’ Gothic imagery is an important part of The Shining's visual horror. The exhibition fittingly displays items from the work of Emily and Charlotte, which connect directly with The Shining. Diane Johnson explains: "in an attempt to understand the essential seriousness of the genre, we discussed Wuthering Heights and Jane Eyre"6 Charlotte Brontë’s Jane Eyre (1847) manuscript is displayed open to a page describing Bertha, 'the madwoman in the attic'. This is referenced in The Shining with the crazed corpse of the 'bathtub lady' in room 237. The theme of imprisonment in the grand old house is central to Jane Eyre and is echoed in The Shining.

Emily Brontë’s Wuthering Heights (1847) also played a part in the development of the screenplay. In Diane Johnson's manuscript notes, next to the scene where Danny is confronted by the ghostly Grady Girls, she has written "rather like the very affecting scene in Wuthering Heights where the visitor wakes up to discover a child's imploring hand reaching through the broken window."7 On display in the exhibition is a 1943 edition of Wuthering Heights showing an illustration of the very scene that Johnson describes in her notes. She confirms it was the "imagery ... and the underlying psychic elements"8 of this story that Kubrick was interested in. 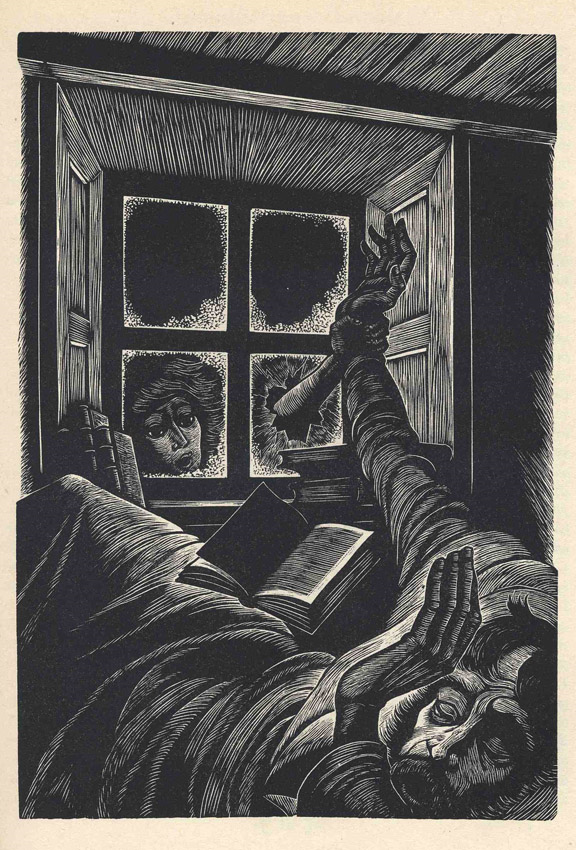 Next in the exhibition's Shining maze is the work of Edgar Allan Poe. His story 'The Masque of the Red Death' (1842) is heavily referenced throughout King's novel (there is a short extract in the epigraph and it reappears many times throughout the text). Although the ballroom scene association remains in the film, Kubrick avoided making such obvious links to the story. In a 1980 interview he downplayed the connection: "All his [Stephen King's] Poe quotes and Red Death things are alright but didn't seem necessary".9 However Diane Johnson does recall discussing "how Poe ended his stories".10

The enduring tradition of the fairytale is the last clue to the mysteries of The Shining that we find in the exhibition. Although a genre in itself and influential to the book and film in many other ways there is also an overlap with the Gothic themes here too. The exhibition points out that fairytales are "not strictly Gothic" but that often the stories are '"supernatural and frightening". On display is a 1909 copy of Red Riding Hood, a tale that is referenced in the research for The Shining. Diane Johnson has commented that she and Kubrick explored fairytales through the psychoanalytic lens of Bruno Bettelheim's book The Uses of Enchantment (1976). In the Stanley Kubrick Archive Kubrick's personal copy of the book with annotations and highlighted sections gives some very revealing insights into the Jack and Danny (Danny Lloyd) relationship of The Shining. Of particular note here is a highlighted section including a description of the symbolism of Charles Perrault's Wolf and Red Riding Hood characters. There are many suggestions of Jack as the big bad wolf in Kubrick's notes and in the film this is made evident in one of the most iconic scenes. As Jack prepares to axe through the bathroom door to get to a terrified Wendy (Shelley Duvall) he teases: "little pigs, little pigs let me in ... "

As we piece together the evidence of the many literary influences on The Shining we can begin to understand more about this enigmatic film. It is perhaps the ghosts of the Gothic past haunting the story that have helped to make it such an enduring classic. The familiar themes from historical literature that influence the characterization, the visual elements and the narrative of the film create a feeling of 'The Uncanny'. The Shining resonates with our cultural past and long imagined fears; like the ghosts of the Overlook Hotel, The Shining has "always been here". 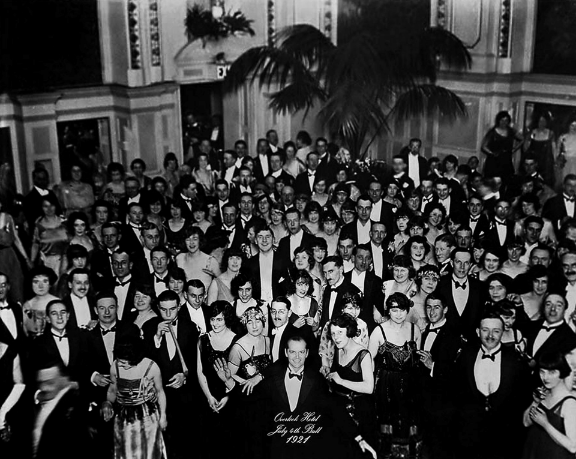 The final shot from the film, Jack is pictured in a photograph on the hotel wall from 1921 (The Shining, 1980)

To learn more about The Shining and the history of Gothic literature visit Terror and Wonder: the Gothic Imagination (now in its final weeks). For more information (including extra late night openings) please visit the website

NB - The title of this post is taken from one of Stanley Kubrick's letters in which he describes The Shining as "a film of terror...and the supernatural" (Kubrick, Stanley, letter to Saul Bass describing The Shining, 10 October 1978, SK/15/5/2/5, SKA).