As international commemorations in Turkey mark the centenary of the battle of Gallipoli we remember the thousands of people on both sides of the conflict who lost their lives. The poet, Rupert Brooke, died after contracting septicaemia from a mosquito bite a hundred years ago yesterday (23rd April 1915) on a ship going to Gallipoli. 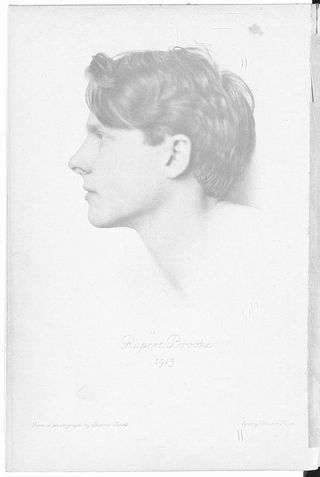 After his death accounts of Brooke’s life were written by Edward Marsh and others, depicting Brooke as a tragic figure cut down in his prime. Brooke’s poems such as ‘The Soldier’ and ‘The Dead’ meanwhile were used to stoke patriotism at the early years of the war. Yet it was felt by many, including Virginia Woolf, that this view of Brooke was not a rounded picture of the man or his work.

In 2000 the British Library de-reserved a collection of letters and a memoir documenting the previously unknown relationship of Brooke and the artist, Phyllis Gardner. The collection was donated to the British Museum Library in 1948 by Phyllis’s sister, Delphis, on the understanding that it would remain closed for 50 years. A note included with the collection stated that Delphis Gardner gave permission for the collection to be reserved for a further period or even destroyed if it was felt that it should not be opened after the initial period of reservation had elapsed.

Colleagues who de-reserved the collection 15 years ago found a wonderful treasure trove of letters from Brooke along with Phyllis Gardner’s memoir of the couple’s love affair which began after Gardner first saw Brooke on a train to Cambridge on 11th November 1911. Brooke’s letters to Gardner illustrate different aspects of Brooke’s character than those presented by Marsh and others. Although some have chosen to highlight what they see as Brooke’s cruel behaviour, and I offer no excuse for his treatment of Gardner, I think that it presents us with a greater insight into all aspects of his character, both good and bad.

This week Brooke and Gardner’s story has been brought to a wider audience though the publication of The Second I Saw You: The True Story of Rupert Brooke and Phyllis Gardner by Lorna C. Beckett. As well as the first publication of Gardner’s memoir the book also includes a wealth of information about their relationship pieced together from correspondence between the couple, their friends and families, and other sources. In addition to providing a revealing insight into the life and personality of Brooke, the book uncovers the neglected life story of Phyllis Gardner, which has been almost lost from history.

The acquisition of two further collections at the British Library (both sources for Lorna Beckett's book) have provided further knowledge about Phyllis Gardner, her family and social circle. In 2009 the Library acquired the Radford Family Papers which include letters from Gardner to Maitland Radford, with one written after Brooke’s death. The letter about Brooke was digitised as part of the Europeana digitisation project and can be found on the Library’s website. In 2013 the Gardner Family papers, including a long series of illustrated letters from Phyllis to Delphis, were donated to the Library. The collections are both catalogued and available to researchers under the references Add MS 89029 and Add MS 89076 respectively.

Please see the British Library website for more information about the new publication.